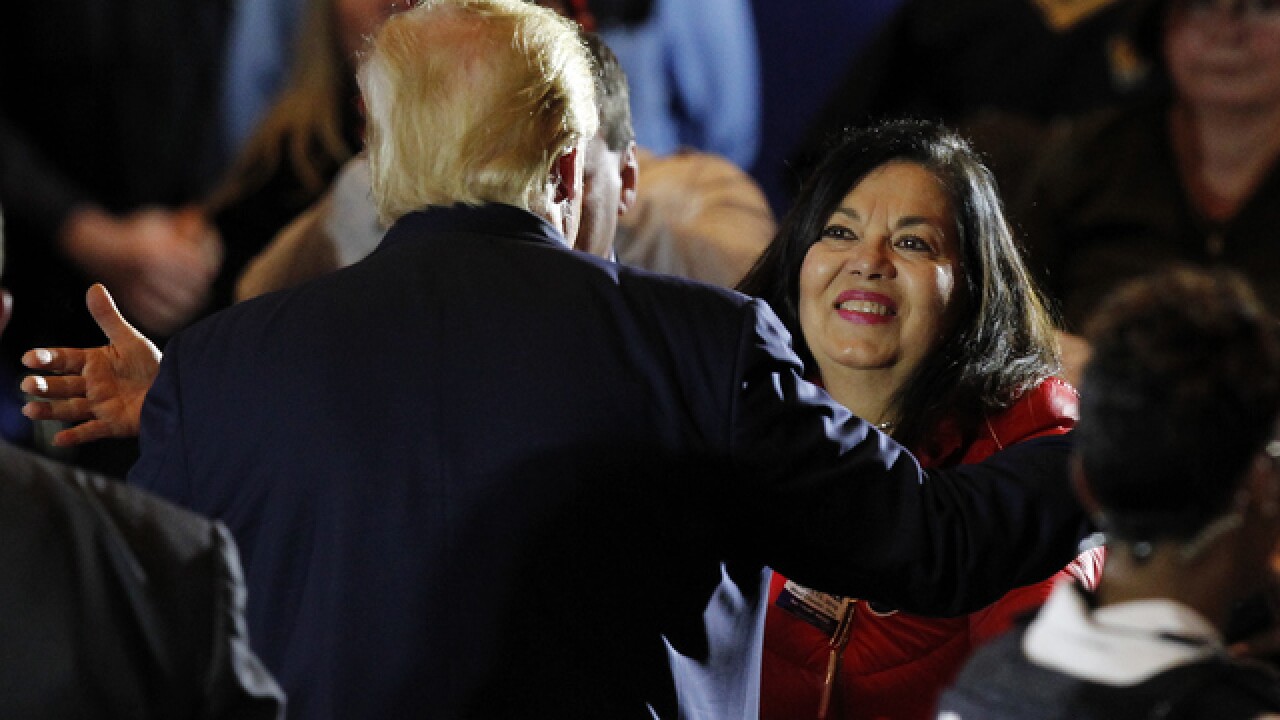 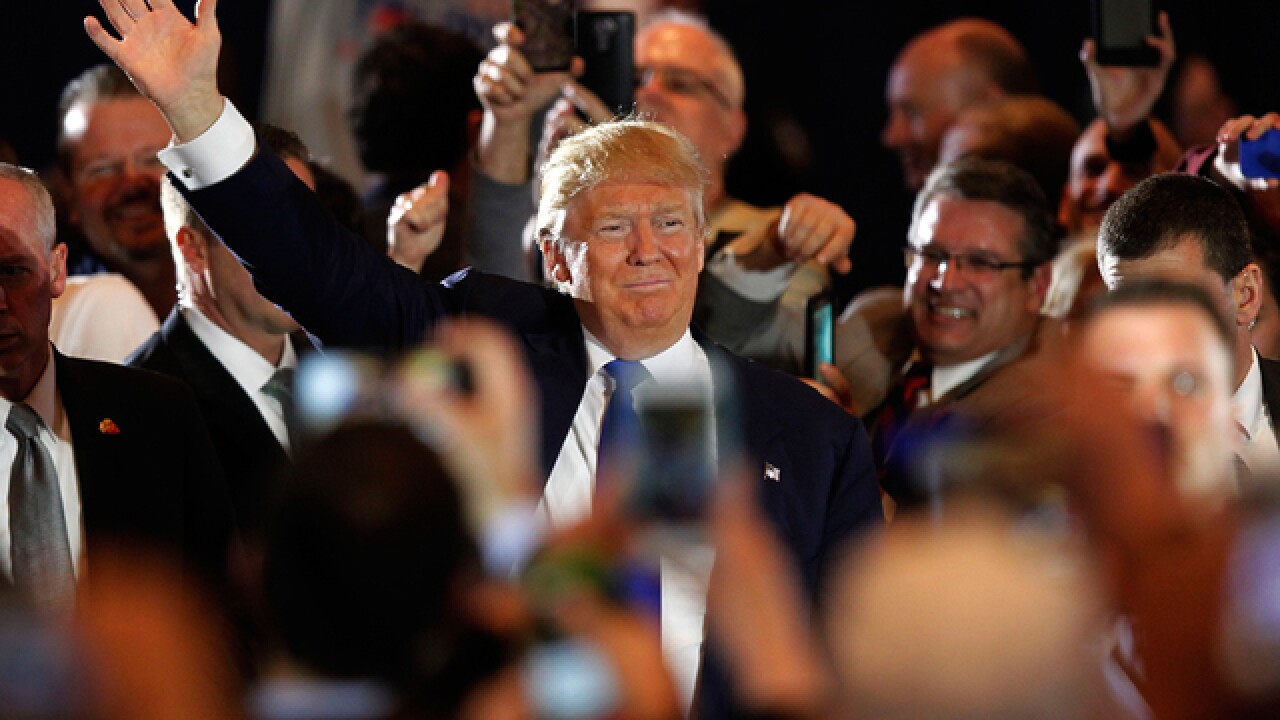 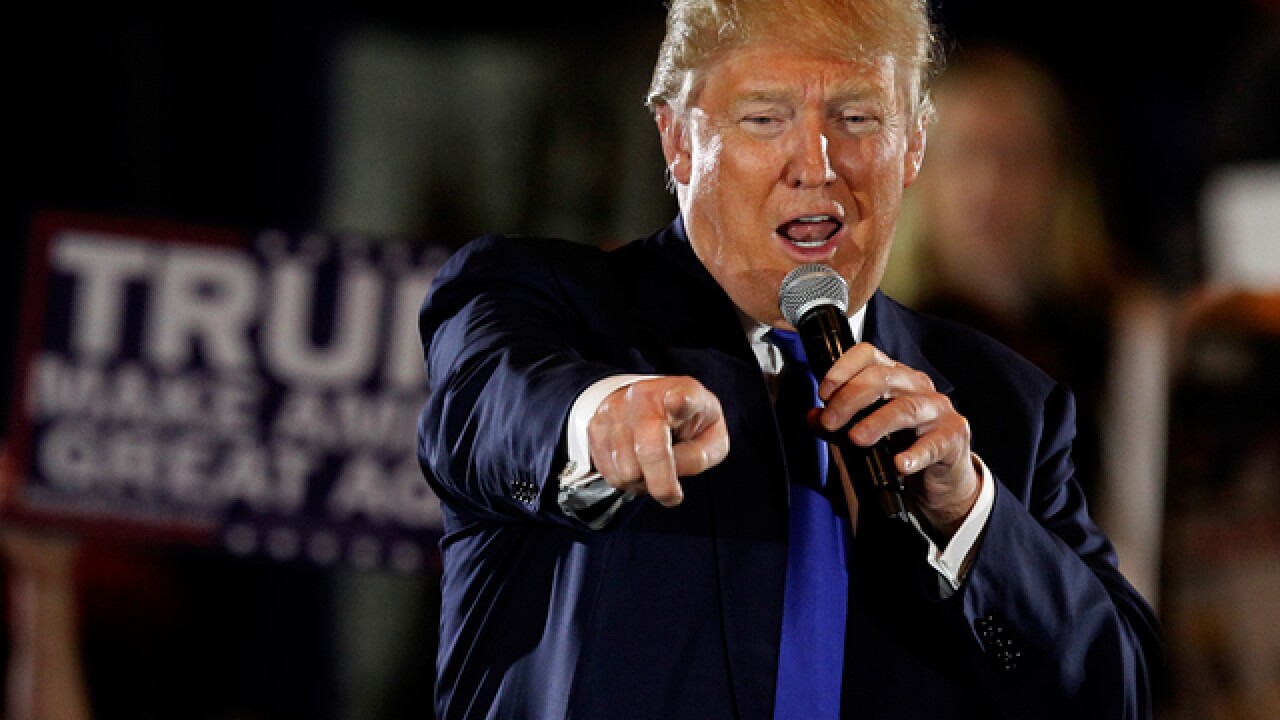 WEST CHESTER TOWNSHIP, Ohio -- Donald Trump is staring at you and you’re holding the mic.

The Republican front-runner for president doesn’t take questions from his audience often, but he did Sunday afternoon during a town-hall style rally in West Chester.

“So this forum is really cool,” Trump said. “I haven’t done this in a while. I love doing this. I love this forum.”

About 1,200 people surrounded Trump as he stood center stage inside the banquet hall of the Savannah Center. About 30 minutes into his address – which started an hour late – he decided to change things up.

“So we’re going to take some questions,” Trump said, and for the next 25 minutes, he did.

The first question came from an unidentified man in the second row.

“I love you Donald Trump,” he said. “You’re the future of America. I’ve been waiting 17 hours. I got here at 11 o’clock last night. I was the first one here. I just wanted to know ... I would love to a get a picture with you before I leave today.”

The second question came from Keith Maupin, the father of Staff Sgt. Matt Maupin, who was captured and killed in Iraq in 2004.

“I come here because you made a comment to John McCain that you don’t think captured soldiers are heroes,” Maupin said.

“What I want you to do is just clarify that for me because I think it’s important for all these people here and for a lot of veterans that’s here in Ohio, especially here in Ohio, I know what you were doing,” Maupin said.

“You know exactly what I was doing,” Trump replied.

“I wanted you to explain that,” Maupin repeated.

“But they are heroes, just so you understand, and real heroes, OK? You know that,” Trump said. “Thank you…thank you. You know that. Thank you. Thank you very much. Appreciate it. OK, who else?”

An unidentified father of a veteran with PTSD asked about helping his son.

"Mr. Trump, I have four sons in the army and my one son is a nurse psychiatric practitioner dealing with the PTSD,” the father said. “He tells me every day that my son ... is overwhelmed dealing with this. What are your plans to help him out?”

“That is such a big problem and I hear it from so many different people and also, I mean, the big problem is with the V.A.,” Trump said. "It’s horribly run. It’s a corrupt enterprise. It’s really corrupt and you look at what’s going on in Phoenix with the V.A., it’s a disaster. A complete disaster. We’re going to take care of the problem. They are having a tremendous problem with that. I fully know it. I fully understand it. We're going to do something about it. We have no choice. We have to do something about it. The truth is we have to treat our veterans much, much better. Our veterans are not being treated well. Thank you, man. Thank you.”

Two young people stood up and identified themselves as interns for Senator Rob Portman. (Portman endorsed Governor John Kasich for President in January.)

“We were just wondering, maybe you heard, maybe you didn’t, (Ohio Secretary of State) Jon Husted just earlier this week refused to let 17-year-olds who are even going to be 18 by the general election not vote in this primary. I know a lot of young voters, a lot of people we talk to support Bernie or Hillary. (Husted) is a Republican,” one of them said. “What do you think about that?”

Trump continued, “So you’re talking about the (age) 17? You’re voting for Trump, right? You’re OK with me. You are OK with me. So what’s going to be the problem? Go ahead.”

“No, I was just wondering that even though (Husted) is a Republican, do you still support him on that?” the self described Portman intern asked.

“Well, I'll have to look at the decision, darling. Honestly, I’ll have to look at it. You tell me what to do. You’re with me, you’re working with us, you’re a volunteer. What do you want me to do?” Trump said.

“If I could vote – I actually missed the deadline by four months – I would definitely vote for you,” she said.

A seventh-grader asked Trump about education.

"I would like to know what you’re going to do for my education in the next four years,” he asked.

Trump talked about the importance of replenishing the military and keeping America safe, then answered the boy’s question.

“The most important thing we can do for education for you at your age, we’re getting education out of Washington, D.C. run by the bureaucrats and we’re going to bring the education to the local area,” Trump said.

“You around this area?” he continued. “We’re going to bring the education where your mother and your father and everybody else’s parents and uncles — they love. They love you. Do you think your parents love you? Huh? They run it with love, OK? In Washington — and look, not everybody is bad. But you basically have bureaucrats that wanna’ make — you know, they get a lot of money and they don’t know what’s going on in Cincinnati. They don’t know what’s going in Ohio. So we’re going to get rid of Common Core and it’s going to be dead. We’re going to have local, locally based education, and you’re going to see a big difference. Big difference. Very important. Good question. It’s actually a great question."

Question 6 was not actually a question.

“I’m from Ohio,” a woman said. “My name is Misty. My entire family is from Kentucky. They were very happy to vote for you in the Kentucky Primary. It is so refreshing to have a presidential candidate that is not bought and paid for and I 100 percent believe in you that you will make America great again.”

“Awe, thank you so much. That’s better than a question. I love it,” Trump said.

Question 7 was also not question.

“Mr. Trump, I don’t have a question for you,” a woman named Evelyn said. “I’m really glad to hear the other questions. But I just wanted to tell you that I am so happy you are running for the next president of our country."

Trump asked about the woman’s accent, and she said she was from Nicaragua.

"I’m telling you, we’re going to do so well with the Hispanics. People know,” Trump said.

Trump then stepped off the stage and gave the woman a hug.

“Hi, I’m Zack. I’m from Kentucky. I have one question. On what day in office will you put Hillary in prison?” a young man asked.

The audience erupted into cheers, and Trump shrugged for several seconds, waiting for the noise to die down.

“So you know, there’s a six-year statute of limitations, I guess, and Hillary’s fighting for a lot,” Trump said "... Look, let’s face it — look, it’s not complicated. What she did certainly to me, is certainly she broke the law, to me. What do I know? To me, she broke the law. It looks so bad from the standpoint of the rest of the country and even the standpoint of all those people that did much less. So many people did much less. How do you think they feel?

"But you know what? The first thing I have to do with Hillary is beat her. The next thing we’ll do is look into that."

A woman told Trump her husband is a veteran and a firefighter and he’s worried about losing his health insurance when he retires.

“If you win, do you think he’ll be able to retire?” she asked.

“We’re going to make this country so strong,” Trump said. "We’re not going to stand for losing $500 billion a year with China, for losing $58 million with Mexico, for losing hundreds with Japan. We’re going to make our country strong again. You know, our military, OK, everyone sees our military budget (and) they don’t realize we take care of Germany. Nobody probably even knows that. We take care of Japan. Do you know if we’re attacked – we have a treaty with Japan—if we’re attacked Japan doesn’t have to help us. If Japan gets attacked, we’re in the third World War. We have a new war going on, OK? Now what kind of deals are these? What kind of deals? We take care of Japan. We take care of South Korea. I love all these countries. I think it’s great, except we owe $19 trillion. We can’t do it. We’ve got to be reasonable. We can’t do it. So we’re taking care of South Korea when the maniac next door acts up, we start up those battleships, we start up those aircraft carriers, let’s say, and we start up, you know, our planes are flying over. We spend millions and millions of dollars. They don’t pay us. They pay us very little.”

"My name is Roger,” a man said. “I’m here in Cincinnati. I’m also the CEO of the Motorcycle Rifle Association. We’ve endorsed your campaign."

“We are going to protect the second amendment, Roger,” Trump said.

Roger then gave Trump a gift. “That’s your membership card,” he said.

“You know the motorcycle guys love Trump?” Trump asked the crowd. “Did you know that?"

“Come on. Let her come up here,” Trump said.

Trump looked to wrap things up.

Trump looked to the back of the room.

“My name is Katrina, and I am a Native American,” a woman said. “My native name is ‘woman who sees.’ Do you know all the other ethnic groups we’ve supposedly done things to have been apologized to but at no point the Native Americans have been apologized to? After you take the oath, maybe in the first month or so you can say, ‘I’m sorry as I can be that we did what we did to you.’”

“Well, I’ll certainly look into it,” Trump replied. “I haven’t been big on apologizing, you do know that right? They complain Trump never apologizes. I’ll look into it. We’re going to do one more (question). We want a good one. Give me a fun one. Give me a fun question, alright? ... I don’t want to leave with a bad question.”

“What could you do, what do you see yourself doing in your plans to improve and bring leadership and bring dedication and integrity back to Washington, D.C.?” a man asked.

Trump was disappointed this was the final question.

“Let me just tell you, it’s sort of the kind of question that’s very important but not exactly the most exciting question,” Trump said.

Before leaving Trump promised his supporters he'd return to Cincinnati if he won the presidency.