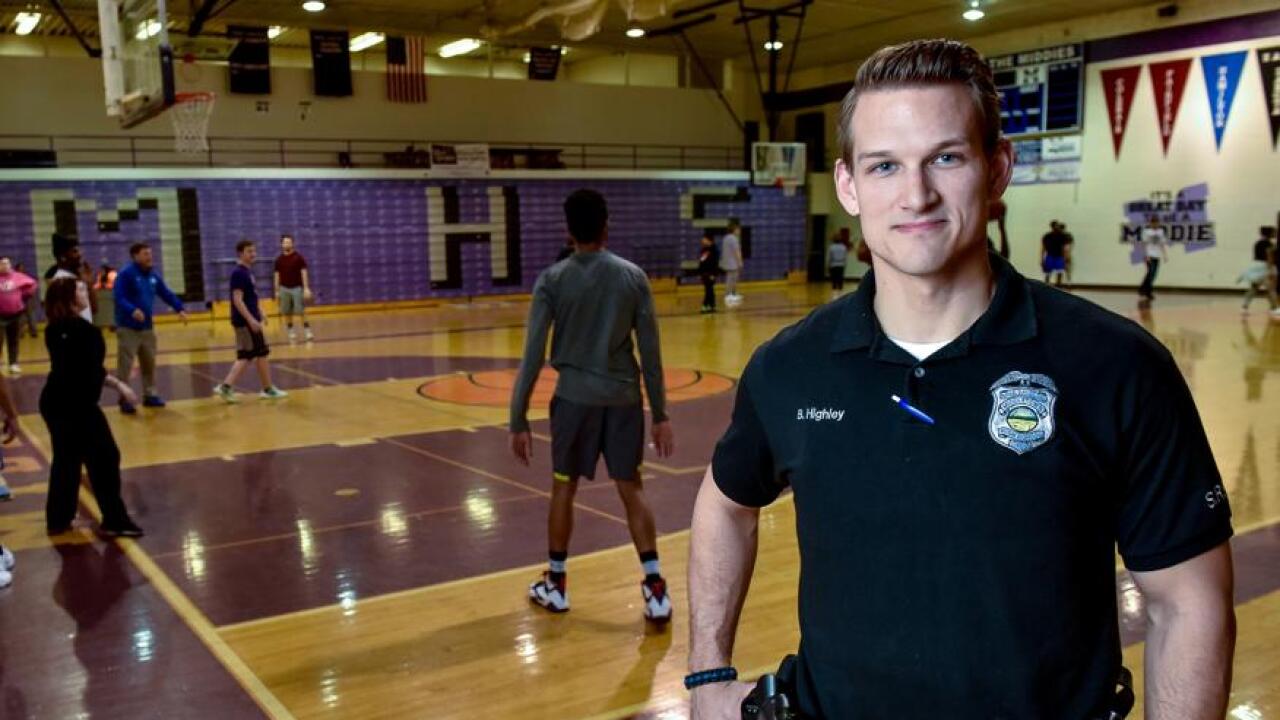 Nick Graham
Former Middletown Police Officer Brandon Highley has been with the Middletown Division of Police for six years and has spent the last two years as a school resource officer for Middletown High School. He is seen here in 2016.

Brandon Highley, who served as a school resource officer and detective, resigned Nov. 15, about a month after a female officer filed a complaint accusing him of making inappropriate comments to her that “if true may constitute sexual harassment,” according to investigation documents obtained by the Journal-News.

Highley was placed on administrative leave during the investigation, according to Benjamin Yoder, an attorney who handles legal matters for the city.

Highley was accused of calling a female officer a sexually explicit name and insinuating he had photos of her breasts on his cell phone while attending an October conference for law enforcement officers in Columbus. The investigation led to allegations that Highley touched the female officer’s inner thigh, threw two female officers onto a hotel room bed and followed the second female officer into a restroom and tried to kiss her during the conference in 2018.

The Journal-News requested comment from Highley and the two female officers through police union President Dennis Jordan but received no reply.

In the resignation letter addressed to Acting City Manager Susan Cohen, Highley wrote, “It has been a pleasure to serve the citizens of Middletown.”

Yoder said the investigation is complete concerning Highley, “but there may be additional officer(s) recommended for discipline for conduct associated with the investigation, but nothing has been imposed at this time.”

The complaint came during the Ohio Attorney General’s Law Enforcement Conference in Columbus, according to correspondence dated Oct. 8 from Maj. Scott Reeve to the city law department, police officials and Cohen.

The department removed Highley from the conference, according to Reeve.

He wrote that Highley was also being investigated for a possible violation of conduct unbecoming an officer.

In her statement, the first female officer said she, Highley, Officer Trey Porter and Sgt. Sam Allen were drinking and went to a restaurant at this year’s conference. She said she took out her phone to take a picture, and Highley slapped her hand. When she mentioned her husband might come to hang out with the group the next day, “Highley started getting angry.”

“This (expletive) has been chasing me and tried to get with me for three years now,” Highley said, according to her statement.

She said she denied sending any photos to Highley and demanded to see the alleged breast photos. In his statement, Allen corroborated her account, saying Highley called her “the biggest (sexually explicit name) in the PD,” and said he had photos of her breasts on his phone.

According to Detective Ken Mynhier, who roomed with Highley at the conference, Highley eventually passed out at a table. He woke Highley, and they went back to the hotel, he said.

The next morning, Sgt. Malcolm Tipton was sent to pick up Highley after a complaint was received.

“At some point (the first female officer) did mention that she could not believe that ‘they let him come after last year,’” Mynhier said in his statement “I was unaware of what she was talking about, I have no knowledge about what transpired at the 2018 OAG conference.”

The investigation into Highley’s behavior at the restaurant led to statements about alleged physical behavior by Highley at the 2018 conference.

The first female officer said that at the 2018 conference, Highley placed his hand on her inner thigh while a group was at a restaurant and later rubbed his groin against her leg while in a hotel room with others present.

“I pushed him off of me, he then grabbed me and flipped me onto the bed,” she said. “I told him he was crazy and told him to knock it off.”

Highley then allegedly grabbed the second female officer and tossed her on the bed, according to statements. She said in her statement that at the 2018 conference, the first female officer told her it was her turn to sit beside Highley at a restaurant and “take one for the team” because he had grabbed her under the table at a bar before.

“Highley was extremely intoxicated, being loud and mocking other customers,” the second female officer said in the statement.

She said Highley later followed her into a hotel room restroom and tried to kiss her.

“I pushed him off,” she wrote. “He stood in the restroom as I washed my hands and he followed me out. In front of everyone. Highley pulled on the back of my pants and tried to put his hand down. I got him off, but then he picked me up and slammed me on the bed.”

The alleged 2018 incidents in the hotel room were witnessed by others, including Trenton Sgt. Craig Flick, who was scheduled to stay with Highley and another Middletown police officer the first night of the conference.

“I observed Brandon carry on in what appeared to be a trance state level of intoxication, talking about his body and sexual related things,” Flick wrote in a statement about Highley’s behavior at the hotel room in 2018.

Flick said he saw Highley pick up the two female officers against their will.

Flick said at one point the first female officer hid behind him. He said he intended to get his own room due to the incident, but Allen offered an extra bed. Later in the night, Highley repeatedly called the second female officer and Flick, according to Flick.

According to Flick, the two female officers spoke openly about the actions of Highley the next day in front of then-Chief Rodney Muterspaw, who arrived a day later than the others.

Muterspaw, who retired from the department Oct. 4, wrote in a statement that he was not aware of any sexual harassment incident or physical incident from 2018. He said neither female officer made a complaint after the 2018 incident.

Highley’s personnel file reviewed by the Journal-News shows positive evaluations, one written reprimand and several letters of praise from the community and the department for his actions as school resource officer