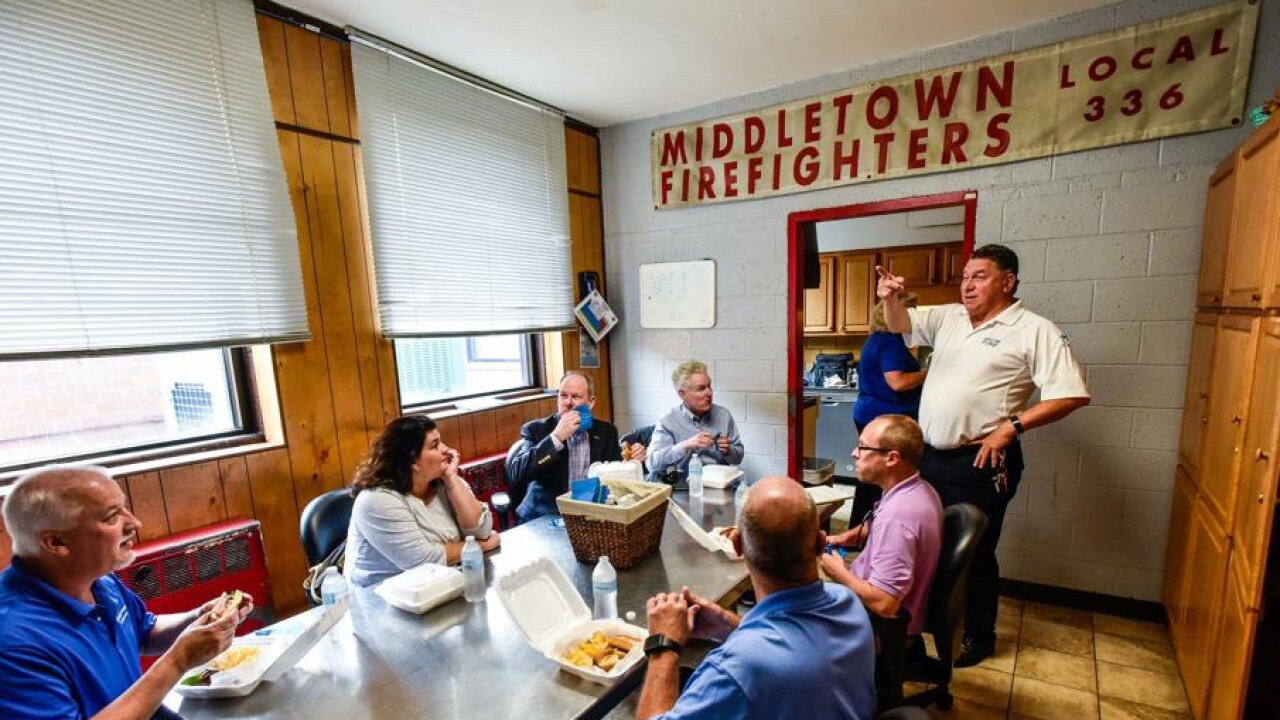 MIDDLETOWN, Ohio — City officials recently toured Middletown’s fire stations to see the conditions up close that have been called cramped, antiquated and even unhealthy.

In the four fire stations operated by the Middletown Division of Fire, the close quarters in the shared living, sleeping and working areas force firefighters to literally work on top of each other, according to the Journal-News. Fitness equipment are in small rooms or behind the trucks. None of the stations meet National Fire Protection Association standards or current building structure codes.

In December, the Ohio Fire Chief’s Association completed a staffing and deployment analysis and made several recommendations such as developing a facility improvement plan and replacing and relocating at least one station. The analysis noted two of the four fire stations, Station 81 at 307 N. Clinton St. and Station 83/Fire Headquarters at 2300 Roosevelt Blvd., respond to 64 percent of the calls for service in the city.

Lolli said Station 81, a 7,700 square-foot firehouse, was built in 1954 and is the oldest in the city. He said the building has not been modified aside from the addition of a new roof.

“We’ve known for some time that this firehouse is old and needs to be replaced,” Lolli said. “We need to put guys in safe and healthy facilities.”

While the fire stations all have carbon monoxide and smoke detectors, none have fire sprinkler systems, he said. Lolli said there is asbestos in the walls and flooring and said it would be more expensive to renovate the fire station than build a new one.

Station 83/Fire Headquarters is the newest station in the city. Built in 1978 at 2300 Roosevelt Blvd., it also serves as the department’s training center. However, Middletown firefighters do their training in shifts due to the building’s small training room. For tower training, they also go in shifts to the Butler Tech facility off Ohio 4.

The 12,700-square-foot facility’s repairs over the years include installation of a rubber roof, remodelling the kitchen, installing new lighting and having the floor redone. But it still lacks other recommended amenities such as a separate room to store fire gear and cleaning protective fire clothing.

However the city’s other two stations are “combo-stations” of three-man crews operating under the First Emergency First to respond. Station 85 located at 4310 Central Ave. and Station 82 at 3765 Dixie Highway are also the city’s smallest firehouses. Both stations are cramped even with fewer duty personnel.

Station 85 was built in 1966 and has 2,500 square feet. After a vehicle crashed into the building, the city installed a pair of concrete barriers to protect the firefighter’s sleeping quarters.

Station 82 was built in the 1960s by Franklin Twp. for its volunteer fire department. The 2,800-square-foot station was transferred to Middletown following the 1996 annexation of the Towne Mall area. The city renovated that fire station in 1997.

He also shared some ideas used in other cities that combined fire stations on the bottom level of a structure with mixed use, commercial or residential spaces that were constructed in a public/private partnerships.

City Manager Doug Adkins said he tasked Lolli and Snively with studying the staffing, equipment and facility needs. He said the city is still two to five years from moving forward on building a new fire station but property acquisition discussions are planned for 2020. Adkins also said the 2020 budget will have funding to design a new station.

Thomas said the goal was to have a 50- to 75-year lifespan for the new building that could be expanded in the future.