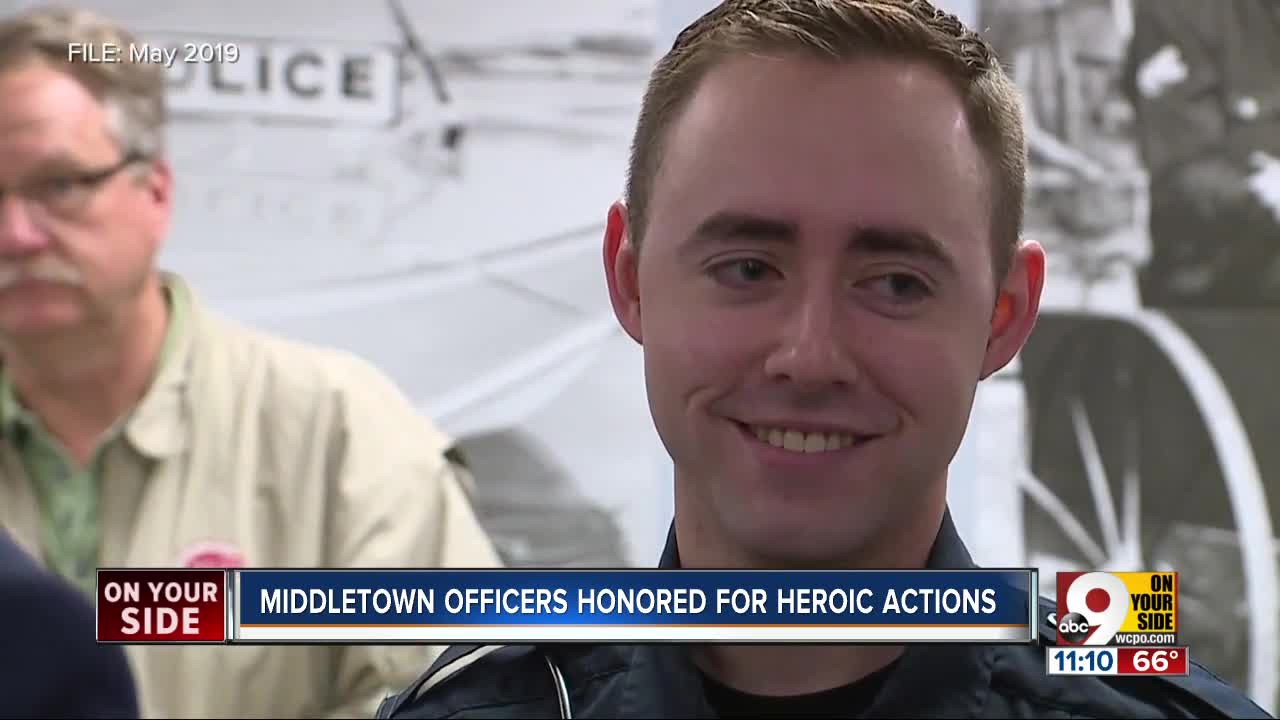 MIDDLETOWN, Ohio — By the time he called 911 from inside his burning home, John Thomas had already doused his wife’s flaming clothes with water from the dog’s bowl and watched her collapse onto the floor. He didn’t want to answer any questions. He wanted help. Fast.

The closest first responders that January night weren’t firefighters. They were officers Sheoki Reece and Austin Mooney of the Middletown Police Department, and they had just moments to rescue the couple.

The pair’s quick thinking and bravery that night earned them state recognition at the Ohio Fire Service Hall of Fame & Awards.

After all, Maj. David Birk said Monday: “It’s not every day that an officer runs into a house on fire.”

Reece, an 11-year veteran of the department, had been on a training run with Mooney, a new recruit, when the call came in.

“There was a male (in the 911 call) stating that the wife wasn’t able to get up, he wasn’t going to leave without her,” Reece recalled.

She and Mooney would have to get them both.

Her goal: “Get there are quickly as possible and hope my rookie does everything he is supposed to do.”

Smoke was rolling out the front door when they arrived at the couple’s Harlan Street home. Reece estimated that what happened next happened within 30 seconds.

Visibility was low, so Mooney called out to John Thomas to find him. Reece spotted Thomas’s wife, Kathryn, on the floor, her robe partially on fire.

“I just patted it out and dragged her,” she said. She wasn’t scared at the time, she added. “Your adrenaline is going. Afterwards, it was overwhelming.”

All four made it out of the house, plus the Thomases’ dog, Paul.

Kathryn Thomas, who went first to the hospital and next to an assisted living facility, doesn’t remember much about the night of the fire. One moment she was calling for her husband; the next, she said, she was hospitalized with second- and third-degree burns on the left side of her body.

Her injuries would have been much worse if Mooney and Reece hadn’t arrived when they did.

“They charged right into the house and picked me up,” she said. “I was just amazed that anyone would do that. I’d just like to say thank you. If it wasn’t for that, I wouldn’t have made it out.”

Thomas added she would be happy to meet the officers if they ever wanted to be thanked in person.

Reece and Mooney received the First Responder Award at the Ohio Fire Service Hall of Fame & Awards ceremony in Columbus.

“It was humbling,” Reece said. “Nice to be acknowledged. It was nothing more than any other officer would have done had they been in that situation.”