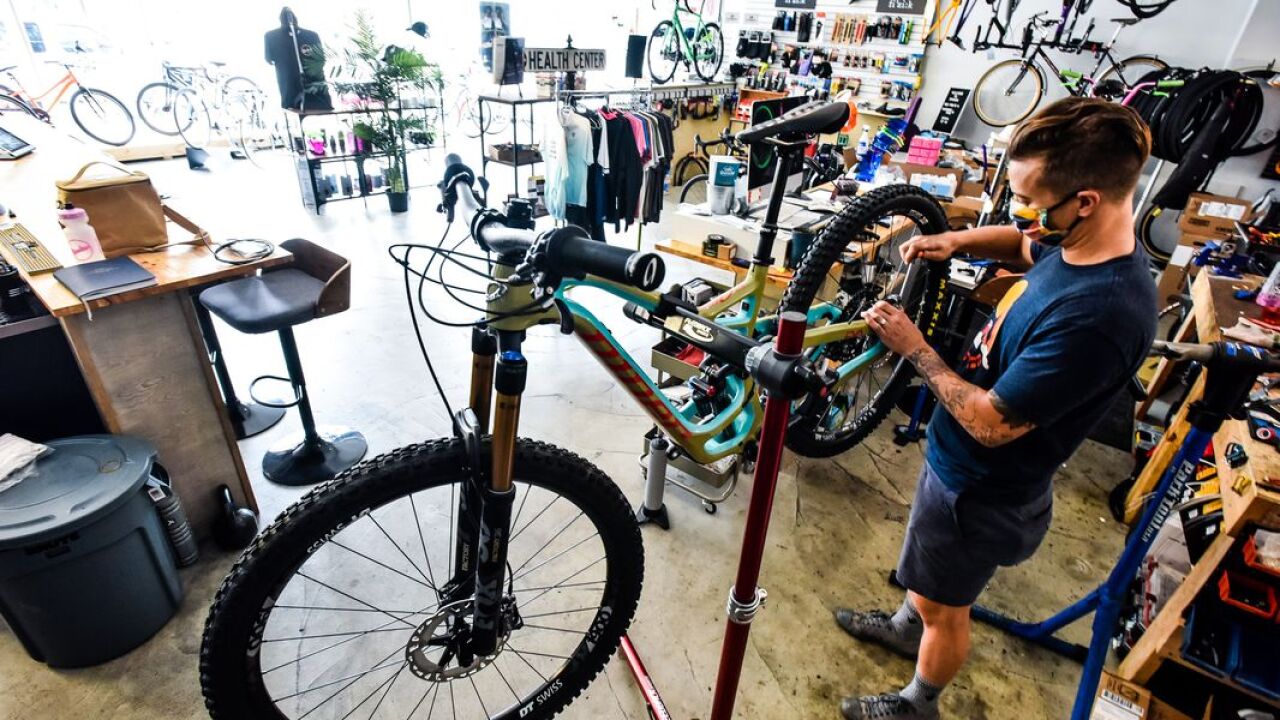 Otto Bohn, owner of Spoken Bicycles on Central Avenue in Middletown, offers a full range of bikes, repair services and parts along with beers on tap at the bike shop. NICK GRAHAM / JOURNAL-NEWS STAFF

At a time when local bicycling shops are reporting record sales because people are looking for outdoor activities during the coronavirus pandemic, one Butler County community is taking steps to make it safer for bicyclists.

Bike shop owners said they have seen such a surge in sales recently they can’t replace their inventory. Fairfield Cyclery, which typically carries 75 to 100 bikes in its store on Dixie Highway, had 10 bikes in stock this week, said General Manager Todd Allan.

Shops nationwide are struggling to stock new bikes shipped from abroad, and U.S. bicycle sales are experiencing their biggest spike since the oil crisis of the 1970s, experts said.

Inventory is low because most of the bikes are made in Asia, and some of those factories shut down for 10 weeks during the height of COVID-19.

Otto Bohn, owner of Spoken Bicycles on Central Avenue in Middletown, said his latest shipment was expected to arrive this week. Now he has been told it will be sometime in October. Those seven bikes are already sold, he said.

He has been sold out for two months, he said.

“A big boom,” Bohn said when asked about recent sales.

That also has meant additional repairs, Bohn said. He has hired a part-time employee to work two days a week to help with the influx of repair orders. He said people are bringing in the bikes from their garage or used ones purchased at garage sales or second-hand stores.

There’s only one problem, Bohn said. He’s out of some parts.

The Columbus Outdoor Pursuits runs two major bike rides in Ohio. While both were cancelled this year due to the coronavirus, Matt Wolf, programs coordinator, said he has an increase in bikes on the road.

He said Ohioans who work from home or those unemployed or furloughed are looking for ways to safely be active outdoors. For some, that means riding a bike.

“You can only watch so much TV,” he said. “So they dusted off the bike in the garage and found something to do.”

The city also plans to improve 1.4 miles of the existing bike path along Verity Parkway between Lafayette and Girard avenues, including widening the path from eight feet to 10 feet and updating pavement markings and signage with the goal of improving the “function and safety of the path,” the city said.

Proposed work in these Historic Districts involves resurfacing and restriping to add the shared lane markings and directional bike lanes. In order to widen and restripe the existing bike path along Verity Parkway, the path will need to be periodically closed during construction.

Construction is scheduled to begin in April 2021 and will require approximately three months to complete. The project is estimated at approximately $500,000 and is 100 percent ODOT funded through its Safety Grant program.