‘I don’t know, everybody bleeding’: Video of West Chester homicides suspect shown for the first time 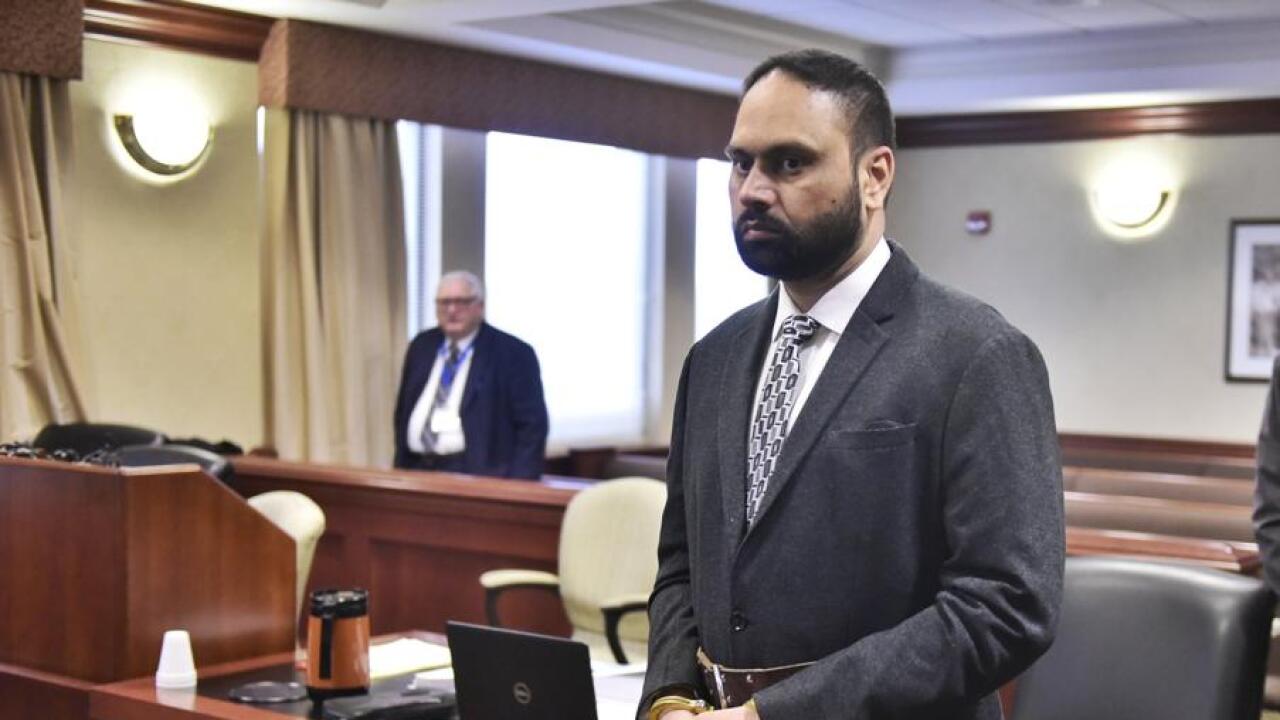 HAMILTON, Ohio — The defense team for a man accused of killing his wife and three other members of his family last year in West Chester Township say his rights were violated when he was questioned while handcuffed outside the scene and at the police department.

But prosecutors say Gurpreet Singh was handcuffed for about 10 minutes for officer safety and as a witness when they found him bloody in the stairwell of the Wyndtree Drive apartment building on April 28, 2019.

During a day-long pre-trial hearing in Butler County Common Pleas Court on Friday, Singh’s words were heard through body cam video moments after he called 911 saying he found his family bleeding.

“I don’t know, everybody bleeding,” Singh answers while lying on his belly in the stairwell of the complex.

His bloody hands are cuffed behind his back in the video.

Singh, 37, is charged with four counts of aggravated murder. With specifications of using a firearm and killing two or more persons, Singh faces the death penalty if convicted. He is being held in the Butler County Jail without bond, and his trial is scheduled to begin Sept 21.

“During those five hours, Mr. Singh repeatedly asked to speak with his children, his family members and to a lawyer,” a defense motion says. “It was not until after two hours of interrogation that Mr. Singh was read his Miranda rights. At that point, Mr. Singh refused to make any further statements and unequivocally ascertained his right to counsel.

“However, Mr. Singh was prevented from leaving the interrogation room, and he was told on multiple occasions that he was ‘detained’ and that he was ‘not free to leave.’”

Prosecutors say Singh’s rights were not violated and the defense fails to identify any particular statements they are seeking to suppress.

Singh was handcuffed for officer safety for approximately 10 minutes, then placed in the back of the cruiser while officers tried to gather information, according to prosecutors. He was later taken to a “soft interview room” to talk to detectives. He was walked through the front door of the police station and was not handcuffed, police and prosecutors say.

Body camera video played during the hearing showed Singh wearing a red shirt, jeans and socks after calling 911. As officers move toward him, blood is visible on his hands, shirt, pants and socks. He cries and says, “please help them.”

“At this point, sure, he is a suspect, but he is also a victim,” says one of the officers on the the body cam.

The handcuffs were taken off a short time later, and he was placed in a cruiser. Medics also checked him to see if he was hurt.

An officer asked Singh in the body cam video, “Why are you so bloody, why are you covered with blood?”

There was no answer from Singh.

The defense continued to underline that Singh was asked multiple questions by police while handcuffed and was not permitted to leave the cruiser or the interrogation room for several hours, even when he begged to check on his children.

But prosecutors and police say in the hours after the murders were discovered, Singh was not in custody. But he was the 911 caller and key to learning what happened. Plus, he was wearing evidence on his person, they said.

No decision was made on the motion to suppress, and the sides will continue the hearing on March 17.