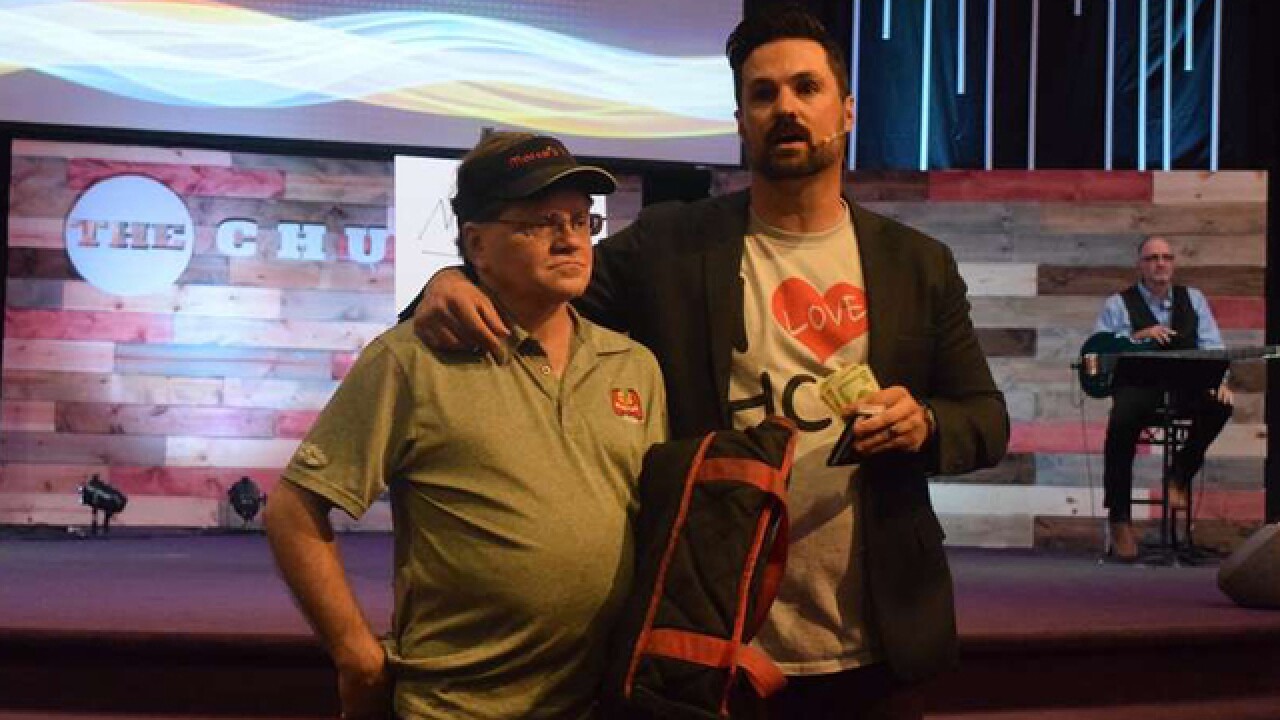 HAMILTON, Ohio — Curtus Moak, lead pastor at Hamilton Christian Center (HCC), had a surprise in store for a dedicated Marco’s pizza delivery driver on Sunday — a tip in the amount of $3,000.

When Moak took over for the Rev. Johnny Wade Sloan last year at the helm of HCC, he said he wanted to celebrate what has been accomplished with an eye toward the future. He also wanted to make sure that the church stayed active in the community and launched a plan to enact some “random acts of kindness.”

Kenny Sharp was the first target of those random acts of kindness on Sunday.

Sharp works at the Marco’s store on the west side at Hamilton and also puts in some hours at Walmart. His wife, Jennifer, works at Christ Hospital and the couple has two sons, Andrew, 17, who has Asperger’s Syndrome, and Thomas, 11, who still has lingering effects from being born three months premature.

Moak happened across an article some time ago that illustrated how a church had selected a pizza delivery driver to receive a larger-than-usual tip to and he wanted to do the same in Hamilton.

“I read an article several months ago about another church who did this,” Moak said. “It really encouraged and inspired me, so I knew I’d like to try it at the HCC one day. I contacted the Marco’s manager and told him my plan. He told me he had the perfect person in mind, Kenny. He is married with two kids and in need of a financial blessing.”

The church ordered a pizza and scheduled delivery to take place at the end of Moak’s Sunday sermon. When Sharp arrived and came into the sanctuary, Moak asked him what his biggest tip had been.

“He told us $25 on a delivery,” Moak said. “I told our congregants that we can do better than that.”

More than 150 people come forward, donating toward the tip and raising $3,000.

Sharp said he is still shaking today about the experience and feels very blessed by what happened.

“That was a big shock — I had no idea that was going to happen,” he said. “They said they would count the money after the collection was done and come back in an hour and they would give me a check. When they gave me the check, I went out to the van and was just in total shock when I saw how much it was made out for.”

Of course the IRS will want its share, but HCC’s random act of kindness is ready for Uncle Sam.

“They told me to send them how much I have to pay in taxes and they will take care of it,” Sharp said.