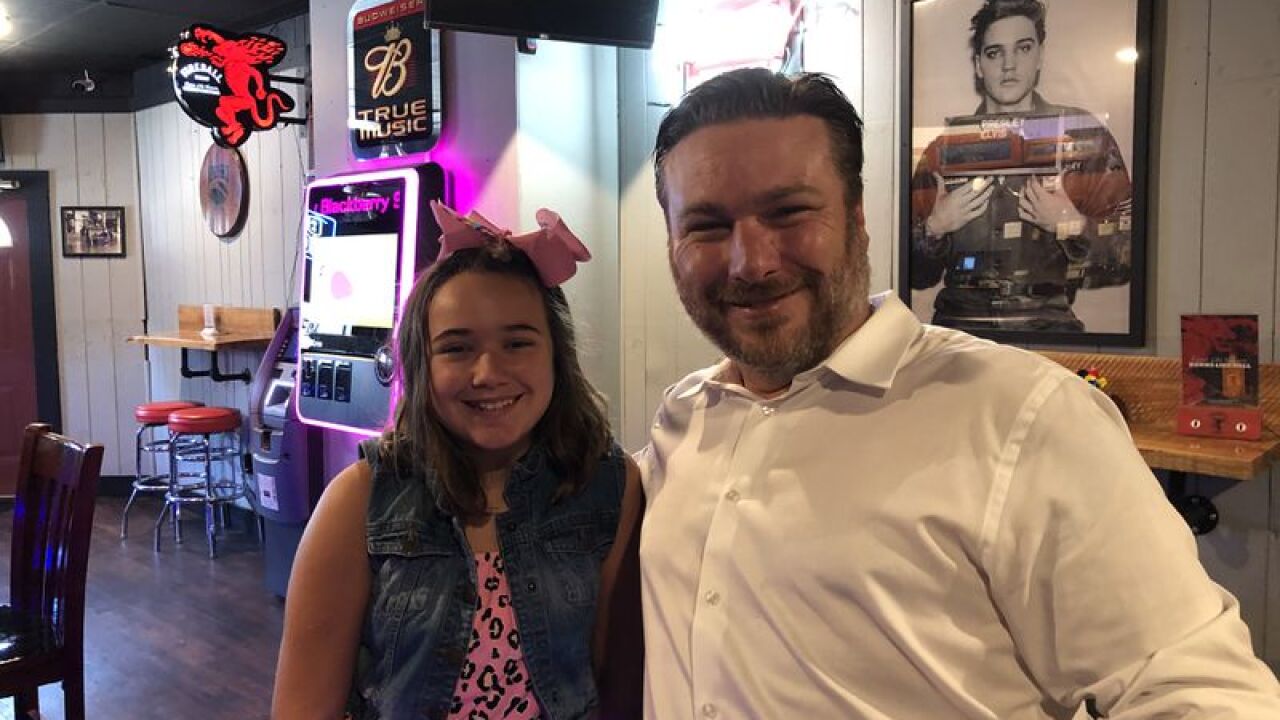 Mike Rutledge
Matt Pater, new owner of Arches Saloon, and his daughter, Cassidy Pater, 11, inside the bar, which he hopes to expand into a family restaurant and bar.

HAMILTON, Ohio — Matt Pater, a sixth-generation Hamiltonian, is back in town after almost two decades away and is trying to clean up the area around the Arches Saloon he recently bought on South B Street.

Pater and his girlfriend, Julie Ferguson, bought the bar and apartment above it this year, according to the Journal-News.

“And we also bought the house next door that has three apartments in it, and we bought another building up the street here as well,” he said.

In the future, he hopes to expand Arches northward to be more of an entertainment complex that’s attractive to families, at least until about 9 p.m.

“It’s a little bit down the line,” he said. “I’d like to wait until a little bit closer to Spooky Nook time to start those plans.”

Also, before that happens, he wants to drive away crime that plagues the pocket of South B Street, in the Rossville neighborhood, where the bar is located (233 S. B St.) with the help of Hamilton police.

“There’s a lot of drug usage in this neighborhood, some thefts, vandalism,” he said. “But mainly, the drugs are the biggest problem.”

Before that, “I’d never had that happen in my life,” he said. “There was a drug issue in here to begin with, so I cleared that out.”

Hamilton recently expanded its Downtown Outdoor Refreshment Area, where people can carry alcoholic beverages outdoors, southward along B Street because of Pater’s plans, and also because of entertainment-district expansions that are expected, so the city can serve the 10,000-plus athletes and their families that will visit the Spooky Nook Sports Champion Mill sports complex and convention center.

Business is OK, he said, although, “our numbers have dropped, because some people have taken resentment to that, trying to clean the place. It’s been hard to back-fill with new people, because the bar has such a reputation, years of potentially being a dangerous place.”

“But we’re trying to get the word out that we’re a safe, fun environment, and we just want everyone to have a great time, and they’ll return again, have another great time,” he said.

Pater said he and his employees work to provide good customer service. For example, “if there’s drinks that we don’t carry and somebody orders it that night, I do my best – if the liquor store or beer place is still open – I’ll run and go get it for them right then and there, so they’re not wanting for anything.”

The bar building’s history is intriguing — it’s named for the railroad bridge immediately to the south of it, with elegant stone arches holding up the train tracks.

“We traced back the history of the building, and the first records show in 1899 it was a saloon, so I’ve got to think we’re close to the oldest operating bar in Hamilton,” he said, although he notes, “it’s been different things throughout the years. During Prohibition it was a grocery store.”

Already, he has installed attractive blue lighting below the bar table, which has been refinished. Ultimately, he’d like to “restore the bar back to its former day, and then add on to it.”

He hopes to eventually, if he can get permission from the city, which would be required because it’s in a historic district, “expand the bar to go down the road a bit, and make a bigger place that has a full kitchen and more entertainment options,” such as entertainment for kids, and a venue for comedians and concerts.

With the promise of Spooky Nook, expected to open in December 2021, various businesses are opening to the north and south of the city’s main business corridor of High and Main streets, with more being developed along the corridor itself.

Pater moved to Nashville about 18 years ago to build homes. He was a production manager for large home-building companies, and also has done historic preservation of buildings.

“The city’s been wonderful to deal with” Pater said, noting he has met with several city staffers, and the police officer who works most closely with that part of the neighborhood.

“You would honestly think that I’m the only business coming into Hamilton, with the amount of attention they give,” he said.

“When I bought this, I knew this was a challenging project. I had no delusion about that,” he said. “But we knew that in time it was going to re-gentrify, with the creation of the Spooky Nook facility, as well as some other projects in Hamilton.”

Pater, 44, is a 1994 graduate of St. Xavier High School, and studied organizational leadership and supervision at Purdue University.

“We’ve been trying not only to clean up the bar itself, but the community,” Pater said. He’s working with Buck’s Junk Removal, which donates its services, to pick up trash from the neighborhood that he pays other people to pick up and put into piles. Buck’s is owned by a customer.