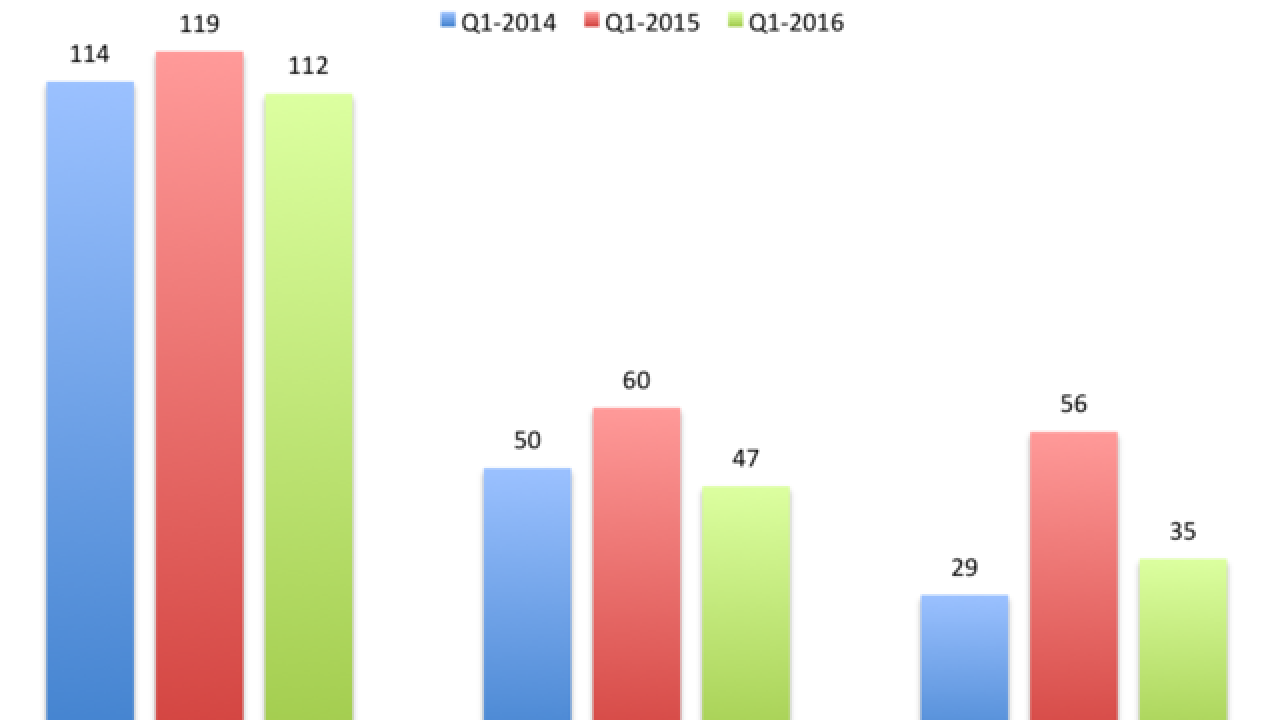 HAMILTON, Ohio -- Drug overdoses continue to be the leading cause of death among cases accepted by the Butler County Coroner's Office in 2016.

Mannix said fentanyl use has been on the rise in both the state of Ohio and Butler County. Fentanyl is an extremely potent prescription painkiller that is 30 to 50 times more potent than heroin. The coroner said they believe the fentanyl involved in these deaths is produced illicitly in clandestine laboratories and mixed with, or substituted for, heroin.

“The disturbing trend of overdose deaths involving heroin and fentanyl continues at an alarming rate," Mannix said. "At the current rate, Butler County will likely see as many heroin- and fentanyl-related overdose deaths as in the record setting year of 2015."

That was up starkly from the same period of 2014, when the Butler County Coroner investigated 114 cases with 50 drug overdoses, of which 29 were heroin-related (25 percent of total cases).

COMPLETE COVERAGE:  Heroin in the Tri-State

A targeted campaign launches May 16 to raise awareness about the signs of a drug overdose and to urge family members and friends of people who use drugs to obtain the opiate overdose reversal drug naloxone to administer during an overdose while waiting on first-responders to arrive.

Ohio has seen a major increase in overdose deaths involving fentanyl, a synthetic narcotic used to treat severe pain that in its prescription form is estimated to be 30 to 50 times more potent than heroin. Ohio had 503 fentanyl-related overdose deaths in 2014 compared to 84 in 2013.  This campaign is a collaboration between the Ohio Department of Health (ODH) and the Ohio Department of Mental Health and Addiction Services (OhioMHAS).

“Drug users may not know when illicit fentanyl has been combined with other drugs like heroin, and they can overdose and die quickly,” said ODH Medical Director Dr. Mary DiOrio. “The use of naloxone as quickly as possible is vital to saving lives during all opiate overdoses – but it is especially critical during overdoses involving fentanyl because it can kill quickly. And because of its toxicity, fentanyl overdoses may require more than one dose of naloxone, so it’s critical to call 911 immediately.”

The public awareness campaign includes two billboards; carry naloxone and know the signs , a radio spot, and mobile and digital ads. They direct people to a website at stopoverdoses.ohio.gov for more information, including how to obtain a naloxone kit without a prescription at participating pharmacies, or through Project DAWN (Deaths Avoided with Naloxone) community programs supported by ODH.

ODH requested assistance from the Centers for Disease Control and Prevention (CDC) to better understand Ohio’s rise in fentanyl-related overdose deaths and how to combat them. After visiting Ohio last fall, CDC issued its report in March, which noted Ohio’s comprehensive approach to the opiate crisis and included recommendations to expand the availability and use of naloxone in the community, and to target public health responses to high-burden counties.

Ohio’s fight against opiate abuse and overdoses during the past five years has included many initiatives to save lives by expanding the availability and use of naloxone. The current two-year state budget provides $1 million to purchase naloxone for distribution to first-responders through local health departments.

Gov. John R. Kasich recently proposed in the state’s mid-biennium review to expand access to naloxone by allowing entities that regularly interact with high-risk individuals, such as treatment centers, halfway homes and schools, to carry naloxone without a distributor license from the Ohio Board of Pharmacy.