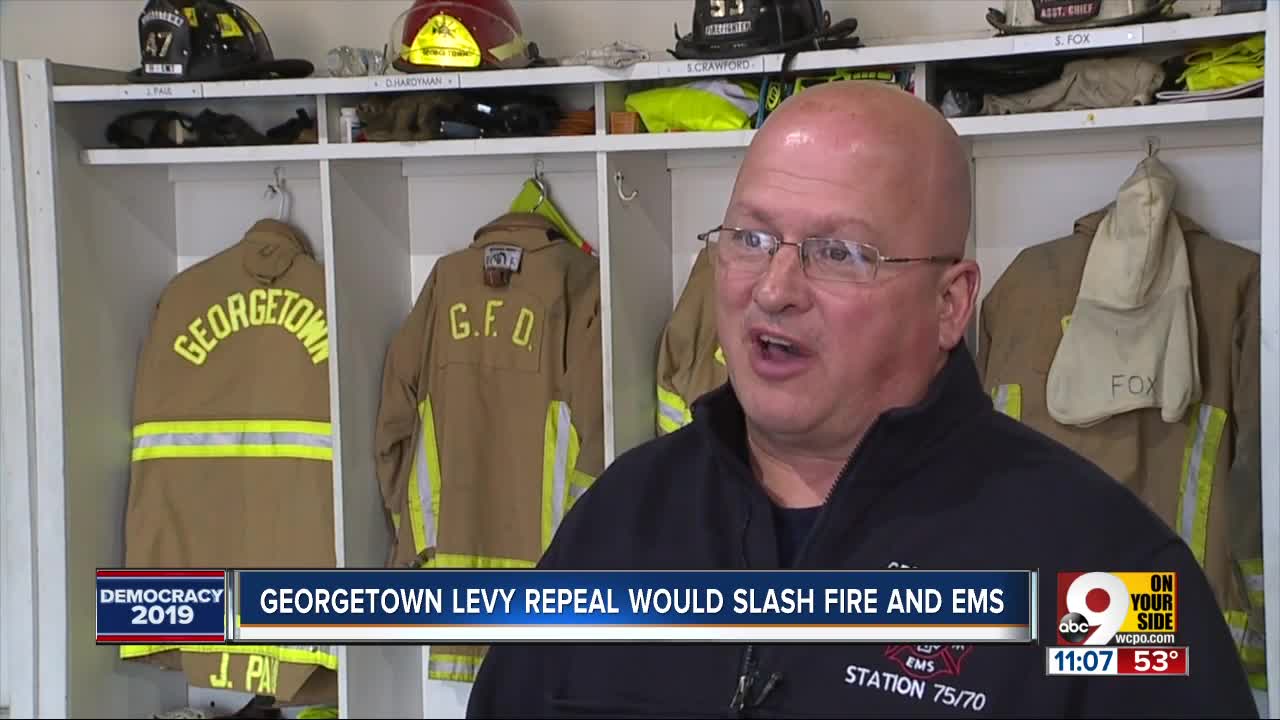 Irreversible brain damage can happen within 6-8 minutes of a medical emergency, Georgetown fire Chief Joe Rockey said Wednesday night. If a new local ballot issue passes, people in his village might not see an ambulance for 40.

GEORGETOWN, Ohio — Irreversible brain damage can happen within 6-8 minutes of a medical emergency, Georgetown fire Chief Joe Rockey said Wednesday night. If a new local ballot issue passes, people in his village might not see an ambulance for 40.

“For the community, in my professional opinion, it’s catastrophic,” he said.

Rockey’s department is funded by a tax levy that voters agreed to raise last fall. Now, property owners pay $9.50 in tax for every $1,000 of their property’s assessed value. Before, they paid $2.50 — not nearly enough to keep the department functional, he said.

Under the old levy, the department received fewer than $200,000 each year and relied on an all-volunteer staff to answer 1,600 annual calls. The higher levy had generated $505,000 by October and enabled Rockey to hire four full-time staffers as well as 14 part-timers.

But voters who head to the polls in November will have the option to revert to the 2.5 mill levy if they choose. Local businessman Mike Napier, who did not respond to WCPO’s requests for comment, has advocated for the funding cut for the sake of lower taxes.

According to Rockey, a “yes” on Napier’s proposal will mean fewer working firefighters, longer wait times for ambulances and preventable deaths. Calls Georgetown couldn’t handle would go to the next-nearest fire department in Mount Orab, which would respond more slowly.

People experiencing medical emergencies, who make up the majority of calls to the department, likely can’t wait the 20-40 minutes it would take for an outside ambulance to arrive, Rockey said.

“There’s people walking around Georgetown right now because we’re a staffed department,” he added. “I’ll leave it at that. Had it be an additional 5-7 minutes, good chance they wouldn’t be here today. If that was a relative or family of mine, I wouldn’t care how much I was paying. Your life is it. That’s all you have.”

Steve Gilliam, who lives in Georgetown, got lucky under the old levy. When he had a heart attack in 2015, firefighters responded to his wife’s 911 call within minutes and saved his life.

If he had waited for an ambulance from the nearest hospital, he could have waited up to an hour.

“I could’ve died by then,” he said. “I preach to my wife and kids that are of voting age, in order to keep the fire levy that we have going now, you have to vote ‘no’ in order to keep it going.”

Dozens of “no” signs marked front yards in the village Wednesday night. “Yes” signs appeared in front of Napier’s home and business.

Rockey said he understands why people such as Napier might chafe at the prospect of paying taxes and embrace a proposal that would lower them. However, he said, the fire department can’t serve Georgetown without money.

Anyone with questions about it is welcome to talk to him in person.

“I’m here every day,” he said. “I’ll be more than happy to sit down, open our books, show where our revenue is coming from, what reserves we have. Show you our future.”