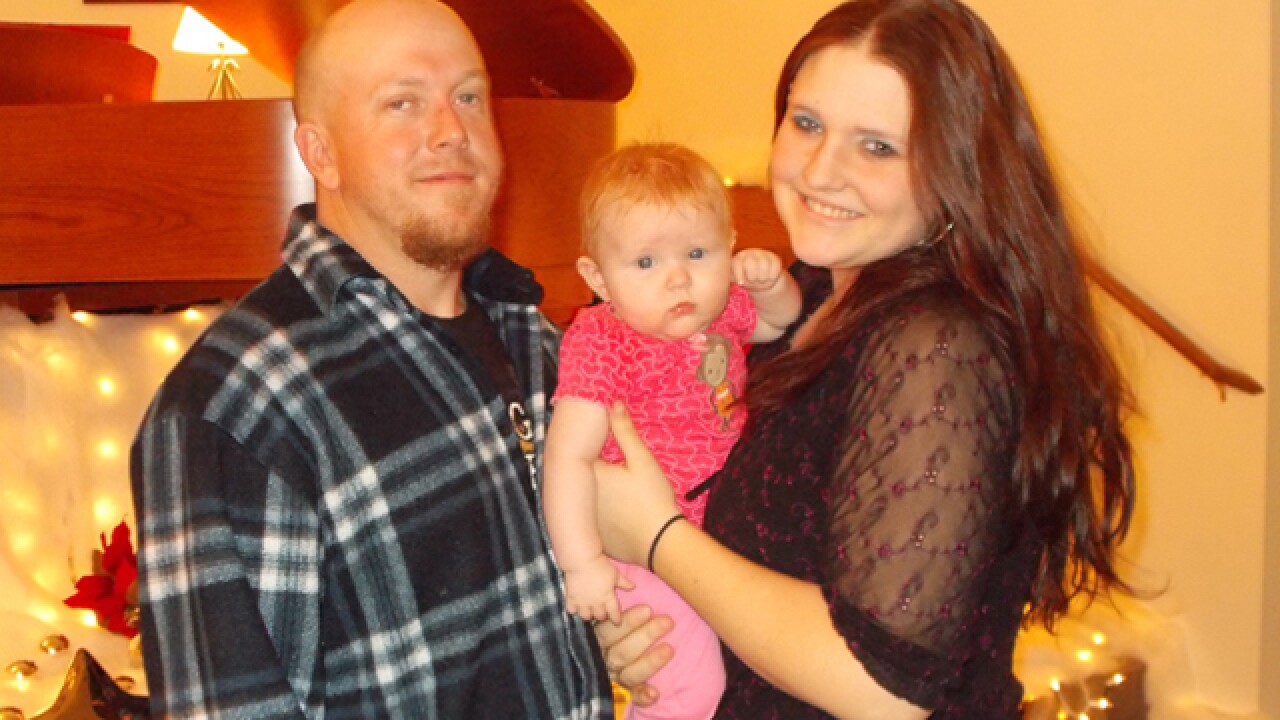 CINCINNATI – Bad blood between Brittany Stykes' husband and the family of the murdered Brown County mother spilled out over the radio waves Thursday.

Shane Stykes called Brittany's parents "idiots" – and worse - for accusing him of having something to do with her fatal shooting on a rural highway two years ago. Brittany and Shane's 1-year-old daughter, Aubree, was shot in the head and their unborn daughter did not survive.

"All I can say is thank god it's not me that has to look in the mirror and realize I'm a dumb ass every day," Stykes said on WEBN.

Stykes and Brittany's uncle Bill Pack got into name-calling while arguing on the KiddChris morning show, with Brittany's uncle blaming Stykes for creating bitterness between them and saying he still thinks Stykes was somehow involved in the shooting, even though Stykes took a polygraph test and was cleared.

"Do I think he had knowledge? Yes, I do," Pack said. When KiddChris pressed him for a reason, Pack was silent.

Stykes then mocked Pack, saying, "At least one of us has some knowledge …  These people, man, it's ridiculous. I don't even get it. As soon as they make this arrest, you all can point your fingers somewhere else and you can maybe leave me alone."

Pack:  "Hopefully once they make this arrest and the charges are brought out then we'll know the whole story."

Stykes: "Yeah, you will, and Dave and Mary Dodson (Brittany's parents) will have to look in the mirror and say, 'Oh, damn, we were completely wrong about that.'"

Brittany's parents "hate my guts," Stykes said, and though he said he has sympathy for them, it's too late to forgive them.

"If you accuse me of stealing five bucks off your dresser or something like that and apologize for it, sure, I might forgive something like that. You can't turn around from accusing me of being a horrible monster that would kill my own family," Stykes said.

"We don't really speak. I keep civil and they get  their visitations and things of that nature. I do the best I can to abide by all that. I don't want their apologies. I don't want nothing from them. Like I said, they're the ones who have to live with that, not me. I didn't accuse them. I didn't go shooting off at the mouth about stuff I didn't know about."

Stykes spoke out after WCPO revealed that the murder investigation appeared to move closer to naming a suspect Tuesday. I-TEAM reporter Jason Law was at the scene when police raided a home 80 miles away in Falmouth, Ky., and took away evidence.

Stykes and Pack also argued over who started what Pack called an "ugly" legal fight over Aubree. Stykes, speaking for the third time on WEBN, said it was Brittany's parents and accused them of playing TV stations for attention.

"Just because I'm not on the TV like Dave and Mary wanting sympathy – "Oh, for me! Oh, for me! – because I choose to keep my matters private, that makes me the fool here?" Stykes said.

Pack said Stykes withdrew from Brittany's family and tried to pull Aubree away, too.

"About seven weeks after Brittany's murder, Shane pretty much stopped talking to anyone, took Aubree away and pretty much said Aubree would be better off, as he said, 'not in the Dodsons' life.' That way she could carry on because 'she didn't need to know the memory of her mother,'" Pack said.

Stykes denied that and said Pack was never part of conversations he had with Brittany's parents.

Pack: "Who took who to court?"

Stykes: "They took me to court for custody of my daughter."

Stykes: "No, they took me to court to get custody of Aubree."

Stykes said once a guardian ad litem gave custody to him, "they dropped their case and went for visitation rights."

Then Brittany's parents were incorrectly awarded parental visitation rights "due to misrepresentation by my attorney," Stykes said.

"The last court battle was just to have it revised to where they did not have parental visitation rights … They have companionship time and that's the way it should have been from the get-go."

Stykes: "I never once told Dave and Mary they were not going to be in Aubree's life."

The accusations and insults went on and on.

Stykes said the Dodsons put Brittany's maiden name on her headstone. "They put my name in about 1-inch letters," he said.

Pack: "Did you pay for the headstone?"

Stykes: "I offered three times to pay for the headstone and Dave Dodson's reply was, 'You're not putting anything on our grave.'"

Pack: "Did you pay for the funeral?"

Pack: "Let me tell you something: Dave and Mary said, 'We own the deed to that and you're not putting anything on there.'"

Stykes said Brittany's parents don't work "so they can sit around all day and come up with stupid scenarios."

"Hey, just because you just found a job in the past few years and you're finally working, don't get picking on everybody else."

Aubree, now 3, is "amazing," Stykes said. "It's unbelievable. Not only is she like normal, she's probably a year or so advanced from where she's supposed to be at her age."

Aubree underwent multiple brain surgeries and is still healing from being shot just above her eyebrows.

"You would never know that that happened to her," her father said.

As for the police raid, Stykes said he doesn't know who owns the house or lives in it and doesn't have any connection to it. He said authorities gave him "some information I can't share." They led him to believe the shooting was a case of mistaken identity, he said.

Brown County Chief Deputy Carl Smith called the home search "successful," adding, "I feel it will be beneficial to our case." Smith said the evidence would be presented to a grand jury but declined to give any other details.

The sheriff's office ruled out Stykes as a person of interest early in the investigation. Detectives said they hope a single print removed from the vehicle in which Brittany died in can help solve the mystery.

Police found Brittany, 22 and five-months' pregnant, with multiple gunshot wounds in her husband’s bright yellow Jeep Wrangler just after 8 p.m. on Aug. 28, 2013. Aubree was strapped in her child seat. The vehicle was sitting in an embankment off U.S. Route 68 near Gooselick Road. Brittany died 3 miles from her parents’ home.