Delta employees save the day for liver transplant recipient 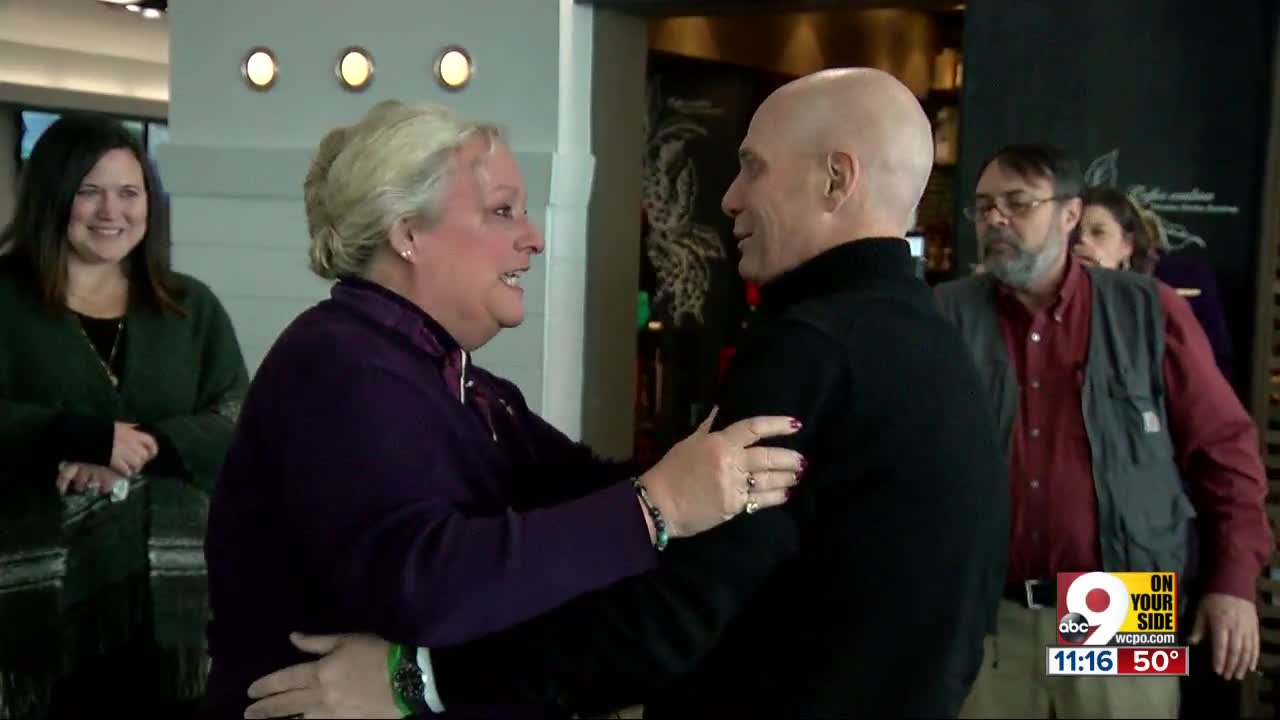 Doctors told Jon McSorley he needed a liver transplant or he would soon die. Ironically, McSorley and his wife had go to Minnesota for a conference on the disease he was fighting when they got a call from the transplant coordinator. A donor liver had been found. But there was a problem. McSorley had to be back in Cincinnati within hours for the surgery, and there was only one more flight that day, and it was sold out.That’s when two Delta employees, Jeanne McMahon and Paul Rhodes, sprang into action. 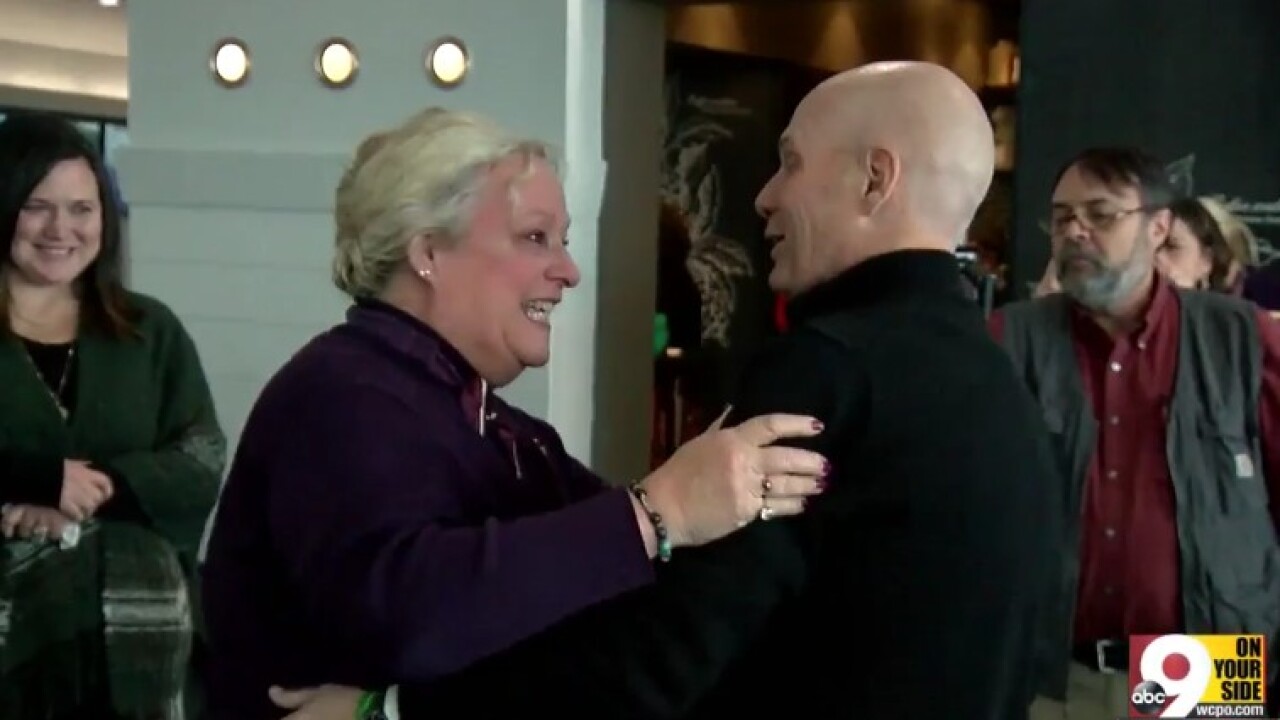 HEBRON, Ky. — A man in desperate need of a liver transplant got the best gift he could ask for, thanks to people he didn’t know.

“All kind of angels were showing up for us that day, that's for sure,” Jon McSorley said.

Last January, doctors told McSorley he needed a transplant or he would soon die. Ironically, McSorley and his wife had gone to Minnesota in June for a conference on the disease he was fighting when they got a call from the transplant coordinator.

A donor liver had been found. But there was a problem.

McSorley had to be back in Cincinnati within hours for the surgery, and there was only one more flight that day, and it was sold out.

That’s when two Delta employees, Jeanne McMahon and Paul Rhodes, sprang into action, fulfilling the promise of UC Health Transplant Surgeon Shimul Shah, who had told McSorley to never give up.

“Always have hope. Be prepared for anything. And when things seem like they can't work out, you gotta muscle up to get it done,” Shah said.

“The docs looked at us and said, 'I would suggest that you have your affairs in order,'” McSorley said.

But McSorley went on living by Shah’s words - Always have hope - and making the most of each day.

Then came the fateful day last summer when he and his wife Sara flew to Minnesota.

“Once we landed, we both turned our phones on,” McSorley said. “We were sitting next to each other. We both looked at each other at the same time in our seats and we were like, ‘Do you have a 513 number with a voicemail?’”

Anna Weber, a transplant coordinator, was calling to give them the good news, calling to mind more of those wise words from Shah.

Be prepared for anything.

And McSorley was prepared to fight for this life-saving chance. The clock was ticking, so they took Weber’s advice:

"When you get off the plane, go to the nearest ticket agent and ask for help."

This is where perfect strangers made all the difference.

Are there three more beautiful words?

“None that I'll ever hear,” said McSorley.

In that moment, the simple phrase gave McSorley comfort – something he needed, because getting back to CVG wasn't going to be easy.

What did the doctor say again?

When things seem like they can't work out, you gotta muscle up and get it done.

Getting it done, getting home in time, started with a slim possibility.

“There's one flight that is available and it's leaving in a few minutes. You need to run to Gate 6.”

They ran fast, but the flight was sold out.

No passengers offered to give up seats until a Delta agent shared McSorley’s situation.

“When she mentioned it was a medical emergency for a liver transplant, she said 15 or 20 lights above went on and we were able to go home,” he said.

Shah said he was prepping for surgery and wasn’t aware of the drama at the airport in Minnesota.

“Anna called and gave me the news – there's another flight coming back and he's on it,” Shah said. “I didn't know the backstory, but I said, ‘Wow! OK. This is karma. Let's do this.'”

The surgery was a success, but McSorley knows it took the actions of several people for him to sit at a Delta gate at CVG and tell his story.

He knows that to write new chapters with his family took someone else's remarkable gift of life.

And he knows the folks who got him from Point A to Point B get big credit, too.

“They helped save my life. I'd give them a hug,” McSorley said.

Little did he know.

“What if we told you you could give them a hug?” I asked McSorley.

“That would be great. Are they here?” he asked.

On cue, McMahon and Rhodes walked up.

As McSorley stood up, the microphone pulled him back in his seat, but not for long. He quickly embraced his Delta angels and all three reveled in the reunion.

“I look better, right? Not as yellow,” said McSorley.

They shared pictures and just the moment. And to think it happened and their lives are forever connected.

"As a team, we knew we needed to get him home," McMahon said.

McSorley recently celebrated his 46th birthday. It was a Merry Christmas, for sure.

When I asked the Delta media folks if we could interview the employees who made a difference in McSorley's life, they said sure and offered to fly them here.

They also sent a video crew to capture the moment for their own internal good news.

That crew helped us in a pinch, because the WCPO photographer I was working with had to leave, so – in full disclosure – the crew working for Delta recorded my sit-down interview with the airline's employees.