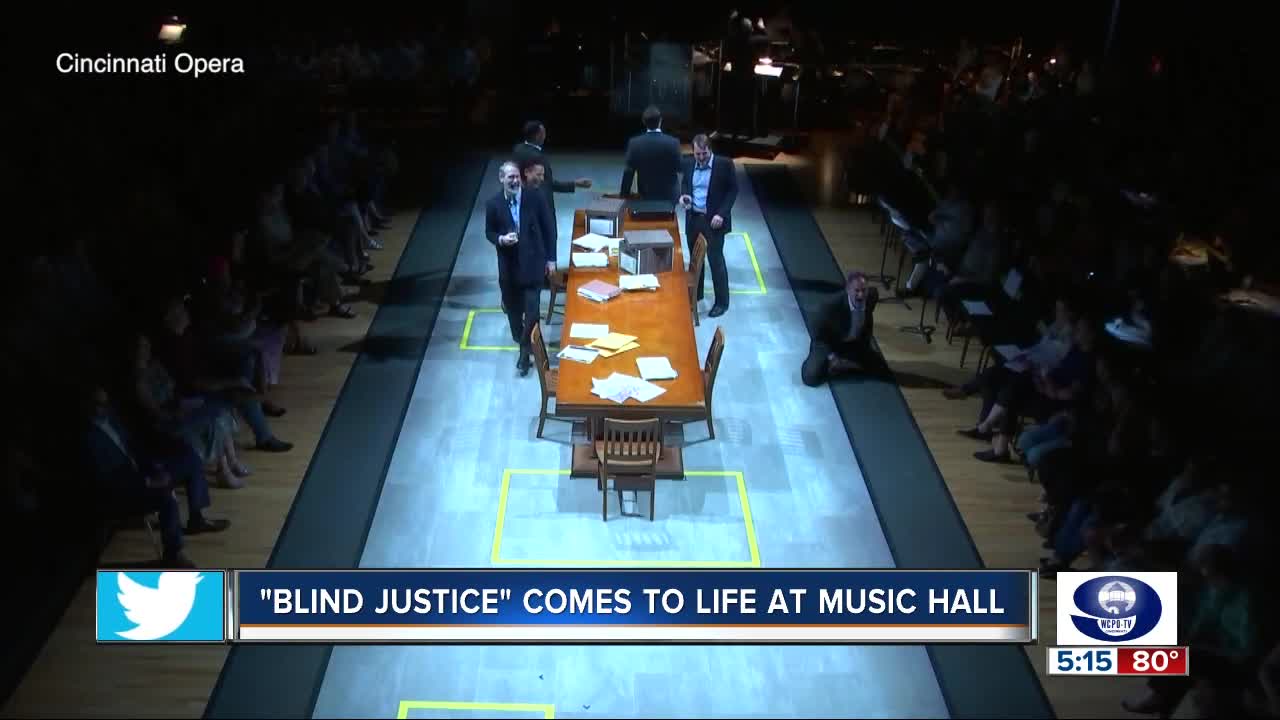 The Cincinnati Opera and The Young Professionals Choral Collective collaborated with the Ohio Innocence Project to create an emotional retelling of six exonerated inmates’ real-life stories.

CINCINNATI — They were wrongly convicted and imprisoned. They were silenced, unable to speak out against the injustice done to them.

Now, their voices soar in a new production at Cincinnati Music Hall.

The Cincinnati Opera and The Young Professionals Choral Collective collaborated with the Ohio Innocence Project to create “Blind Injustice,” an emotional retelling of six exonerated inmates’ real-life stories through opera.

“All of the performances so far, I’ve seen nearly half of the audience in tears,” said Evans Mirageas, the opera’s artistic director for the Wilks Theatre.

“Blind Injustice” is the first time the Cincinnati Opera has built a show around living characters who are part of the creative process.

“It’s incredibly humbling because these women and men had their lives robbed from them and spent hundreds of years collectively in prison,” Mirageas said. “(Thanks) to the hard work of the Ohio Innocence Project, they were freed.”

One of the six exonerees, Nancy Smith, served 15 years after being convicted of child molestation before the OIP helped secure her release.

“We’re human people,” Smith said. “What we go through is not easy.”

For exoneree Ricky Jackson, who was in prison for 39 years, watching the show “opened up a floodgate of emotions about being back there.”

“I cried the whole time,” he said.

Librettist David Cote said singing the stories of these six can be emotional but not always sad. To remain authentic, 40% of the opera's libretto comes straight from interviews with the wrongly convicted.

“In addition to being a very sad story of years stolen from people’s lives, we wanted to show their joy and resilience in the music and words,” Cote said.

The opera was commissioned for this group based on the book of the same name by Mark Godsey, a prosecutor-turned-attorney for OIP at University of Cincinnati’s College of Law.

In less than two years, the 90-minute opera was finished.

“What was done to them demands big retribution — big voices — and the size that you can get in opera,” composer Scott Davenport Richards said.

The six stories come to life so that flaws in the criminal justice system come to light.

“Yes, it is about Nancy Smith and Derrick and Laurese and all of the others,” Mirageas said. “But these are stand-ins for women and men just like them who are still unlawfully imprisoned all around the country.”