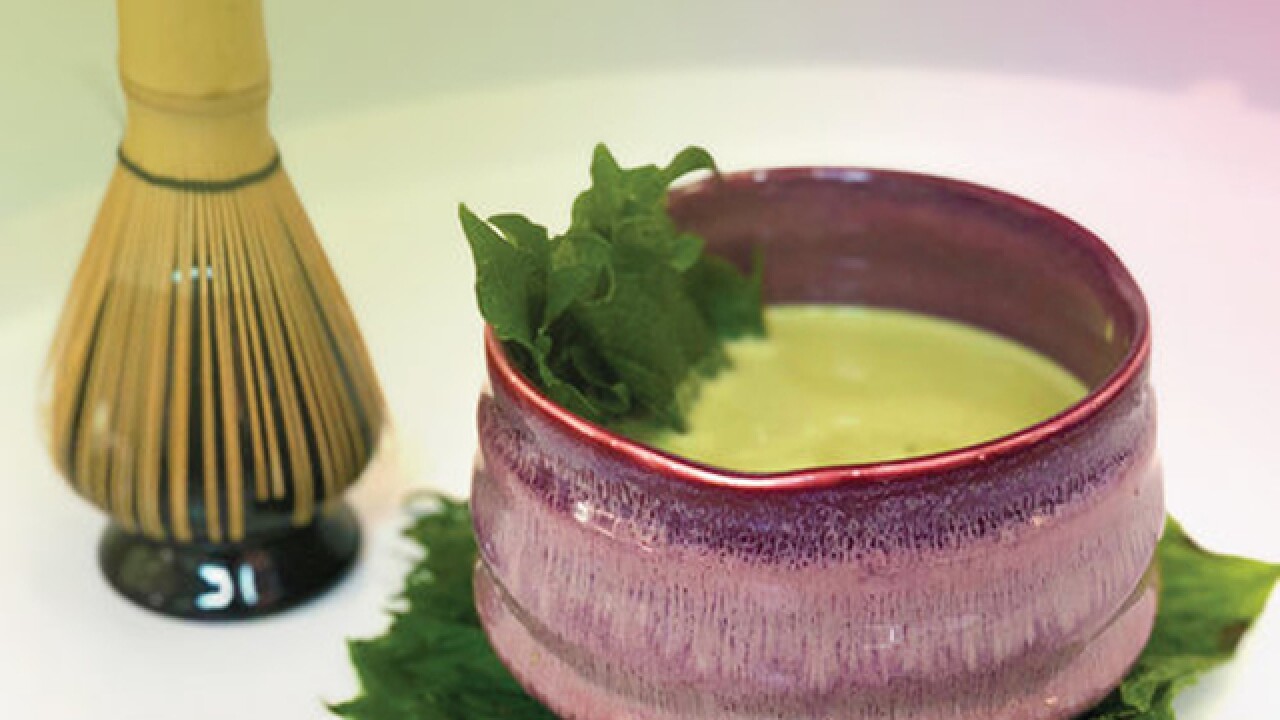 On July 12, in collaboration with Smooth Nitro Coffee , he'll launch what he believes to be the world's first nitro matcha latte, on tap at Japanese-style karaoke bar Tokyo Kitty .

"It is a new frontier of tea because no one is doing this -- the merging of technology and a legendary-type tea into a drink," White said. "I've never seen anything like this, and it's my job to see things like this. It is way more high-end than has any business being in a keg, but I want people to experience it."

He's referring to the fact that he uses a meticulously curated ceremonial-grade matcha from Uji, Japan; ceremonial is the highest grade of matcha, made from ground green tea leaves that spend a few weeks in the shade.

White names all of his teas after folklore monsters, and he named his matcha  Kappa Matcha after the river-dwelling turtle-like monster. (It resembles a Koopa Troopa from Mario Bros.)

"He looks like a real chill uncle," White said about the monster, designed by Wendigo Tea art director Matthew Franklin.

Nitro matcha has been around for a while -- some coffee shops in Chicago and Los Angeles have it on tap -- but the added latte element is new. To make the drink, White hand-whisks matcha powder with almond and coconut milks (the drink is vegan) and then places the concoction into a keg.

"Once you brew tea, it starts losing its luster and character over time," White explained. With the nitrogenation process, the kegged tea retains a long shelf life, similar to beer, he said.

"Not only does Smooth's technology allow the beverage to be velvety smooth, but the nitrogen also helps to preserve and maintain the complexities of Wendigo's Kappa Matcha," said Dan Thaler, Smooth Nitro's founder. He described it as "the absolute creamiest and smoothest matcha latte ever seen before."

The idea of the Kappa Matcha Latte sparked last year when White and Smooth Nitro were stationed next to one another at Oakley's The O.F.F. Market .

The launch event, billed as the Future of Tea , will not only mark the nitro matcha latte's debut, but it also will be a chance for White to show tea can be cool.

"There aren't exciting tea companies," White said. "You don't hear of tea companies going out on a limb and doing interesting things. I'm regularly unimpressed by tea companies. Somebody needs to do something cool."

At the event, Tokyo Kitty also will supply cocktails made with the nitro latte, and White plans to have a few more of his teas on tap.

The nitro latte will be a permanent menu item at Tokyo Kitty, White said, adding that he appreciates that the bar is willing to take a risk in serving something so unusual.

"I don't think anybody else would be willing to have a frothy green thing come out of their nitro tap," he said.

White hopes the Kappa Matcha Latte will land in more bars and restaurants -- especially those that want high-quality tea products. People seem to grasp the difference between good coffee and bad coffee, and good beer and cheap beer; White wants people to elevate tea in the same realm.

"Everyone has a relationship with tea -- whether it's their grandma who had sleep tea, or somebody who traveled somewhere far away and brought it back," White said. "Having regular people more knowledgeable about what they're experiencing just seems like the next step."

The Future of Tea