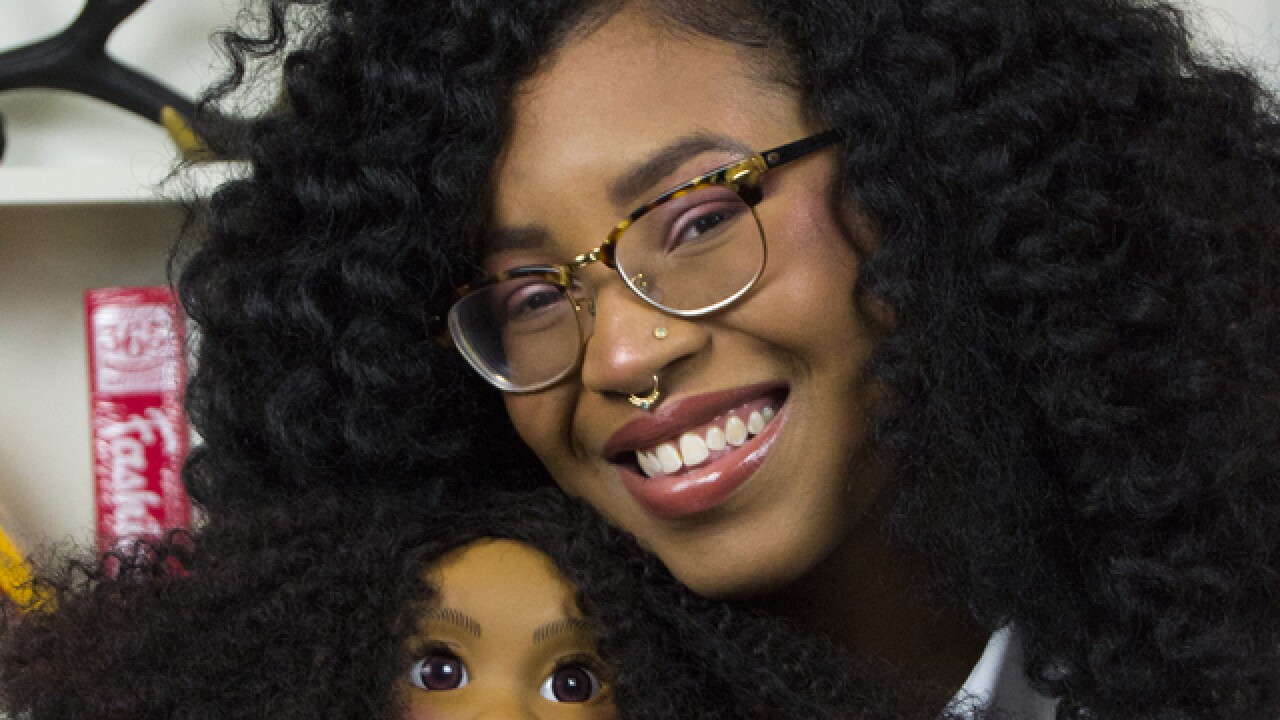 Copyright 2018 Scripps Media, Inc. All rights reserved. This material may not be published, broadcast, rewritten, or redistributed.
Kevin Eigelbach | WCPO contributor
<p>Yelitsa Jean-Charles and "Zoe," the doll that her company, Healthy Roots, manufactures is designed to help children of color love their hair.</p>

CINCINNATI -- Until she was 20, Yelitsa Jean-Charles didn't know how to wear her hair.

"I used to straighten it," Jean-Charles said. "I thought that made it prettier. I was always taught that the closer to European-style hair, the better… but you shouldn't have to feel that you have to straighten your hair.

"You should love the hair you have."

That experience helped the Over-the-Rhine resident when it came to creating her new startup, Healthy Roots, which makes dolls and storybooks designed to help teach natural hair care to young girls of color.

Aside from making money, its mission is to combat internalized racism and colorism, she said. The latter refers to a social hierarchy in which people with lighter skin are deemed better than people with darker skin.

How did the business get started?

In her junior year at the Rhode Island School of Design, the New York City native took a 3D illustrations course in which she was asked to redesign a fairy tale character. She chose to make Rapunzel -- traditionally depicted with long, blonde hair -- into a brown-skinned girl with curly hair.

All her friends of color really liked it, she said. They talked together about how great it would have been to have a doll that looked like them when they were children. There are some dolls with brown skin out there, she said, but added that you have to do more than paint a white doll brown for a girl with brown skin to see herself in it.

So, she put together a team and created a Kickstarter campaign that raised $50,000 in September 2015, which the team used to produce 1,000 of the prototype doll, "Zoe."

Zoe has African-American features, stands 18 inches tall, and sells for $65. A companion book about her experience with hairstyles sells for $30.

Jean-Charles landed in Cincinnati because she worked as a graphic designer for two local tech startups as part of a fellowship with Venture for America, a New York City-based nonprofit that matches recent graduates with startups.

"Venture for America is so proud of all Yelitsa has accomplished with Healthy Roots," said the nonprofit's CEO, Amy Nelson. "These dolls serve a real need in the market, and the progress Yelitsa has made in a very short time is remarkable."

The company's goal is to create dolls that represent the "black diaspora" worldwide, Jean-Charles said, so its next projects will be Haitian, Nigerian and Afro-Brazilian dolls. How quickly that could happen depends on money.

To that end, she's raising funds now for a seed round of investment she hopes to complete in April. She's planning a trip to San Francisco to talk with angel investors there. Angel investors in Cincinnati seem more interested on tech companies, she said.

What does the local startup scene lack?

It would benefit from bringing in people with different experiences and perspectives, she said.

She contrasted that with cities on the East Coast, where she has made business connections on the street.

"Cincinnati is not the same kind of networking … you have to learn to navigate the space differently, and meet the right people," she said.

When she pitches the company to investors, Jean-Charles constantly feels she's starting from behind, because most of them don't know about hair care for people of color. Too many times, she's pitching to men who have only worked at tech companies or as finance officers in banks. They know nothing about the beauty industry.

That has taught her to avoid certain pitch contests.

"I look at the judges and their backgrounds, and I know I'm not going to win that crowd over," she said. "If you're focused on Bitcoin and tech, I'm not for you," she said.