Xavier's Musketeers made school history Sunday, now here's how they could win it all 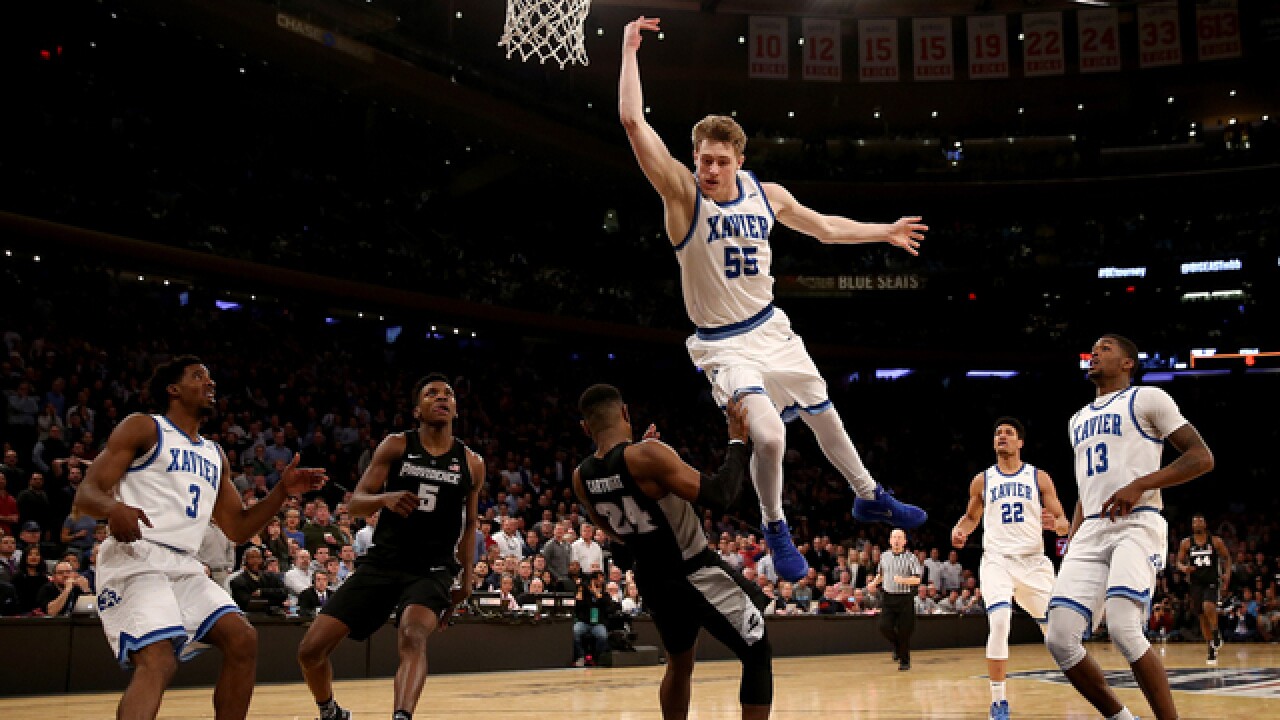 Image copyright 2018 Getty Images. All rights reserved. This material may not be published, broadcast, rewritten, or redistributed.
J.P. Macura #55 of the Xavier Musketeers heads for the net as Kyron Cartwright #24 of the Providence Friars defends in the final minute of the overtime period during semifinals of the Big East Basketball Tournament at Madison Square Garden on March 9, 2018 in New York City.Macura was charged with a player control foul.The Providence Friars defeated the Xavier Musketeers 75-72 in overtime. (Photo by Elsa/Getty Images)

CINCINNATI -- Xavier’s senior class has experienced almost everything imaginable during its four seasons together -- from heartbreaking losses to exhilarating victories, and plenty of program firsts.

In many ways, the Musketeers' senior trio of Trevon Bluiett, J.P. Macura and Sean O’Mara are a sum of the team's experiences, both positive and otherwise.

On Sunday night, Xavier earned a No. 1 seed in the NCAA Tournament for the first time in school history, but the Musketeers are brutally aware how precarious high seeds can be.

Two years ago, the Musketeers were a program-best No. 2 seed, with a 27-win team that seemed destined for a Final Four run.

Xavier led the Badgers by three points at halftime and by nine with six minutes left, but Koenig hit a pair of 3-pointers in the final 13 seconds, one to tie the score and another at the buzzer to break Musketeers’ hearts.

"I still think about the shot going in at the buzzer," said junior Kaiser Gates. "It was heartbreaking.”

The Musketeers (28-5) face Texas Southern in the West Region at 7:20 p.m. Friday in Nashville. A win would set up a matchup on Sunday with either No. 8 seed Missouri or No. 9 seed Florida State.

Xavier won its first Big East Conference regular season championship this year and achieved a program-best No. 3 ranking in the latest Associated Press poll. The 27 wins in the regular season also were a school record.

But the Musketeers won’t be taking anything for granted on Friday night.

“I feel nervous before every game,” coach Chris Mack said. “What you do to alleviate those feelings is you get your team as well prepared as you can. You get them excited to play. We have a senior-laden team. I know they’ll play with some urgency.”

Last year, the Musketeers overcame injuries and a late-season six-game losing skid to squeeze into the NCAA Tournament as a No. 11 seed. They then proceeded to make a run to the Elite Eight, falling to top-seed Gonzaga on the doorstep of the Final Four.

Two years ago, they were earmarked for greatness.

"It’s something that we’ve talked about and learned from, the experiences from that game,” O’Mara said. “We have four guys that were part of that team. We know what happened at the end there.”

The Musketeers have many of the qualities necessary for success in the NCAA Tournament.

They also have areas of concern. The defense has been porous at times this season. The Musketeers are susceptible against teams with small, quick guards, which was evident in a December loss to Arizona State and two losses to Providence.

“I think our defense grew up the last few weeks,” Mack said. “You want to be playing your best basketball going into the tournament. I think we’re on the verge of that.”

One important advantage for Xavier is that they have strong senior leadership from players who have played in the NCAA Tournament in each of their four years, and in that time experienced all the peaks and valleys March Madness has to offer.

But is the value of experience overstated in March?

“Experience helps, but being ready to play that night probably is the most important thing,” Mack said. “I think you can look at a team like Villanova. A few years ago, they won the national championship. The very next year, they were bounced out in the second round.”

The Musketeers also have been through the wars, winning 15 games this season in the rigorous Big East and 28 overall against a top-five schedule. Their stay in the Big East Tournament was brief, however, losing in overtime on Friday to Providence.

Xavier has been tested often this season, going 5-1 in games decided by four or fewer points.

“We’ve had a lot of close games this year,” O’Mara said. “We’ve learned a lot from our losses. Those losses have driven us to bounce back. At this point, we know it’s over if we lose. It’s those minor details, it’s one or two possessions that decide games.”

Xavier has reached the NCAA Tournament in five straight seasons and in 12 of the past 13 years.

The Musketeers have advanced to at least the Sweet 16 six times in the past 10 years. They have reached the Elite Eight three times but never the Final Four in any of their 28 NCAA Tournament trips.

The opportunity for one final NCAA Tournament run has driven them all season. But it's a cautionary tale. Bluiett believes the Musketeers are better prepared to handle the responsibility and pressure inherent in earning a top seed.

“We were doing just fine two years ago, then it was over for us,” Bluiett said. “It was a motivating factor for us. We want to get back and attack and finish. This being my last go-around, you want to take advantage of that.”