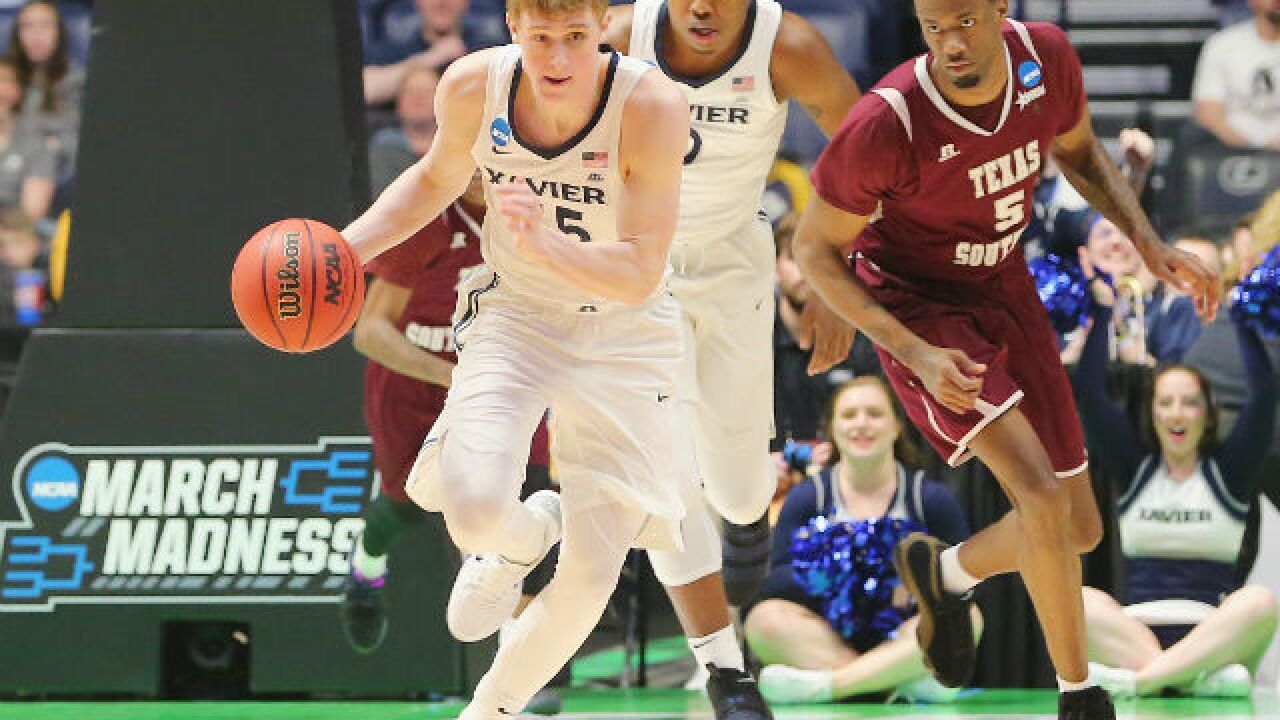 Image copyright 2018 Getty Images. All rights reserved. This material may not be published, broadcast, rewritten, or redistributed.
<p>NASHVILLE, TN - MARCH 16: J.P. Macura #55 of the Xavier Musketeers dribbles the ball up the court against the Texas Southern Tigers during the game in the first round of the 2018 NCAA Men's Basketball Tournament at Bridgestone Arena on March 16, 2018 in Nashville, Tennessee. (Photo by Frederick Breedon/Getty Images)</p>

NASHVILLE, Tenn. -- The NCAA Tournament is about advancement, not aesthetics.

It might have been easy for Xavier, playing its first-ever game as a No. 1 seed, to feel the need to look the part.

And, at times during Friday night's 102-83 win over Texas Southern at Bridgestone Arena, the Musketeers did play like a top seed.

Foul trouble and a back injury to freshman Naji Marshall in the second half, left the Musketeers short at guard and took some polish off the win.

But, Xavier mostly overcame those challenges in a relatively comfortable victory.

An hour or so later, No. 1 overall seed Virginia lost to Maryland-Baltimore County to become the first No. 1 seed to lose in the first round. So, the Musketeers were offering no apologies for not being perfect.

"We had a thin deck," coach Chris Mack said. "Any time you advance in the NCAA Tournament, you consider yourself fortunate. It wasn't aesthetically pleasing by any means, but we will play on Sunday."

Style points don't matter much in the NCAA Tournament, where it's all about survival. But, the Musketeers did express a desire to put two solid halves together, something they hadn't done in a while.

Consistency was key for Xavier on Friday night.

"It's about taking care of the ball, doing the little things," said Trevon Bluiett.

Aside from a 16-0 spurt by Texas Southern in the first half, Xavier provided a consistent defensive effort over 40 minutes, despite allowing 83 points to the athletic Tigers.

"I give Texas Southern credit, they made the game really choppy," Mack said. "We played a defense (zone) we've played maybe three minutes in the last 15 games or so because of foul trouble. It wasn't perfect by any means, but we did the job well enough."

Senior leadership is among the Musketeers' best attributes coming into the tournament. And, it was on display Friday night with Bluiett, J.P. Macura, and graduate transfer Kerem Kanter combining for 79 of their 102 points.

Macura scored 18 of his 29 points in the first half. Bluiett finished the night with 26, and Kanter added 24.

"We talk a lot about experience mattering, and I thought those guys did a great job getting us off to a great start," Mack said. "It's something I've grown accustomed to, having coached them for four years."

The Musketeers say the pressure of being a No. 1 seed isn't something they felt coming into the tournament.

Xavier doesn't have to look far for evidence that seeds don't matter.

The Musketeers were a No. 2 seed in the 2016 tournament before losing to Wisconsin on a buzzer-beater in the second round.

They were a No. 11 seed and among the final at-large teams given a bid to last year's tournament, then proceeded to reach the Elite Eight.

The Musketeers have won a lot of close games this season, which can be attributed to the formidable schedule they've played, but also some defensive deficiencies that have cropped up at times.

Despite its 16-19 record, Texas Southern had a couple matchup problems for the Musketeers with dynamic 5-foot-7 guard Damontrae Jefferson and 7-foot-2 center Trayvon Reed.

But, Macura scored nine straight points and drew a charge as the Musketeers led by as many as 18 points in the first half and were never truly challenged.

One concern for the Musketeers heading into Sunday's second-round game is the condition of Marshall, who started Friday but played only 16 minutes before leaving with a back issue.

Mack said it's the same back issue that plagued Marshall earlier this season, and that it was too early to define Marshall's status for Sunday.

The Musketeers passed their first test on Friday night. The challenges will grow with each passing game. That's how it works in March.

"We're the one seed, so every team will give it their best shot so we've got to be ready to take their punch," Bluiett said. "We're well aware."