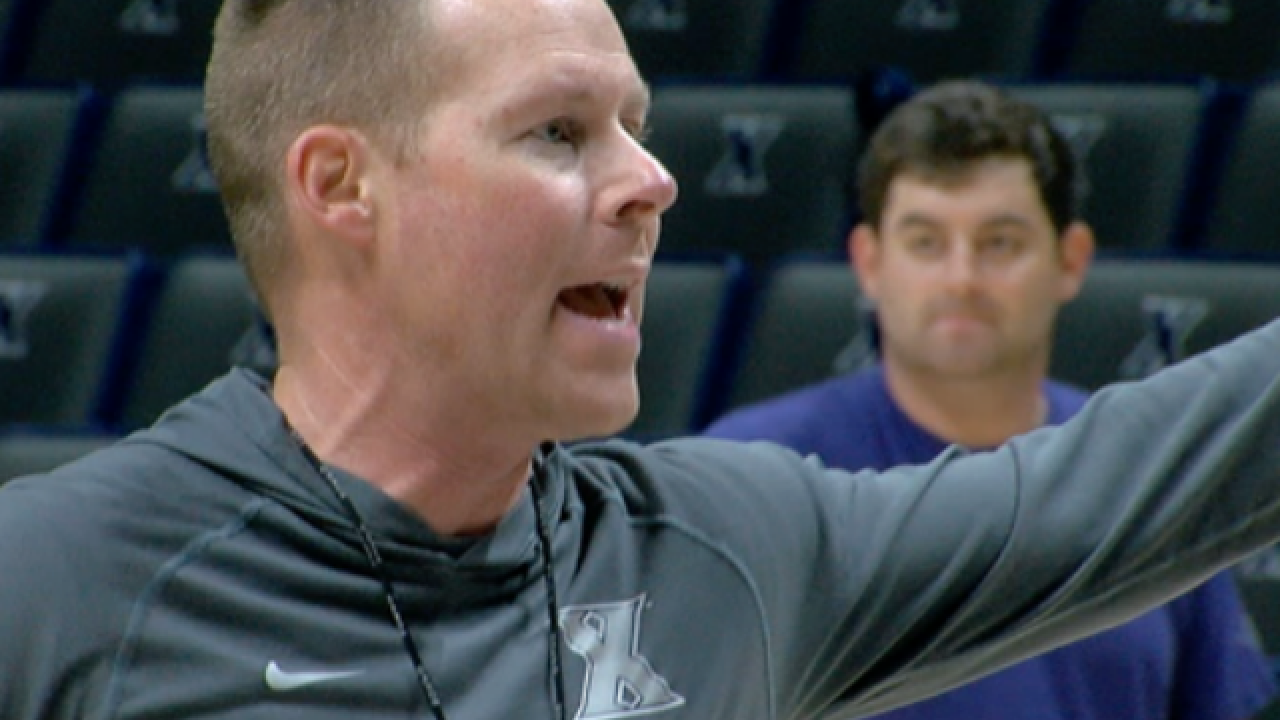 Copyright 2018 Scripps Media, Inc. All rights reserved. This material may not be published, broadcast, rewritten, or redistributed.
<p>Travis Steele</p>

CINCINNATI -- Travis Steele's first victory as head coach at Xavier on Tuesday night at Cintas Center wasn't a thing of beauty. It had more grit than style.

It was Tyrique Jones' type of game.

"He's our heart and soul," said Steele. "We need his energy."

In the second half of the Musketeers' 82-69 win over IUPUI, Jones got tied up with IUPUI's 7-foot-1, 260-pound center Ahmed Ismail. As officials rushed in to calm the skirmish while signaling possession for the Musketeers, Jones ripped the ball from Ismail's hands and sprinted down court before pausing to entice the crowd with two arms raised.

"He made some hustle plays," Steele said. "Our team fed off that."

Excitability isn't anything new for Xavier's junior forward. What's new is the quick hands and feet and the newfound body control. The sleeker, slimmer Jones dropped around 25 pounds over the summer, transforming his previously 260-pound physique into something more aerodynamic.

Within the first 10 minutes of Tuesday's game, Jones scored 10 points, had three steals -- two of which resulted in breakaway dunks -- and took a pair of charges. Jones scored Xavier's first basket of the new season with a thunderous two-handed dunk on a lob from Naji Marshall.

Jones finished the game with 17 points, six rebounds, four steals and an assist before fouling out.

"Coach Steele stresses, be an every day guy," Jones said. "Bring the same energy every day. It helps me be a better leader."

The Travis Steele era officially got underway on Tuesday night at Cintas Center, and it's pretty clear that the Musketeers' new head coach has his work cut out for him. The rough-and-tumble performance might be what Musketeers fans should expect this season.

There were moments of brilliance on Tuesday, but those were few and far between. The new defensive-mindedness under Steele was apparent only for brief stretches. The absence of injured point guard Quentin Goodin didn't help the Musketeers, who have only 10 scholarship players.

It took a yeoman's effort for the Musketeers to close out Tuesday's win. If there is an identity that ultimately will emerge for Steele's inaugural team, perhaps he summed it up: "It's never going to be easy."

Marshall played despite missing four days of practice due to illness and responded with 13 points and a career-high seven assists in a team-leading 36 minutes. Paul Scruggs fouled out to further limit the Musketeers' options at guard.

In the end, Steele celebrated the start of his 11th season at Xavier with his first career win as the Musketeers' head coach.

"Glad to get the first one," he said.

Xavier didn't allow a point for more than four minutes to start the game. The Jaguars didn't record a field goal until the 14:53 mark of the first half. The Musketeers led by as many as 18 points.

However, IUPUI finished the first half on a 12-0 run to close to within three points. Despite being picked to finish sixth in the Horizon League and having junior guard Camron Justice ejected in the first half for tripping Xavier's Zach Hankins, the Jaguars led 42-40 early in the second half.

"I was disappointed with our response in the first half when they went on their run," Steele said. "But I was really proud of how our guys came back in the second half."

Enter graduate transfer and Greensburg, Indiana native Ryan Welage. The transfer from San Jose State scored 13 straight points, including a pair of three-pointers, to help turn an early second-half deficit into a 57-50 lead and calm the nerves of the sellout crowd at Cintas Center.

"I thought he had good looks in the first half," Steele said. "At halftime, I told him to keep shooting."

With 20 or so friends and family in attendance, Welage scored 21 of his team-leading 24 points in the second half to help Xavier escape what would have been a season-opening disaster.

"My teammates got me great looks. It was me becoming more comfortable, knocking shots down," Welage said. "It felt good to knock a few more down this game. It was a good showing for Greensburg. A lot of people are texting me congratulations. It felt good to have the hometown support."

Coming into the season, Steele expected great things from his team on the defensive end of the floor. On Tuesday, Xavier forced 15 turnovers, had 10 steals and held IUPUI to 36 percent shooting. That wasn't enough to prevent Tuesday's game from being too close for comfort for Steele.

"We have to be more handsy, get deflections, create offense from our defense," he said.

Steele became the eighth straight Musketeers head coach to win in his debut. Xavier has won 29 straight regular-season openers, including 27 straight at home. Its last loss in an opener was to Southern Utah State in 1989.

"I told our guys, every game is going to be hard," Steele said. "Doesn't matter who we're playing, it's always more about us. We have to be the hardest-playing team on the floor, regardless of what's going on at the offensive end. The effort has to be there."