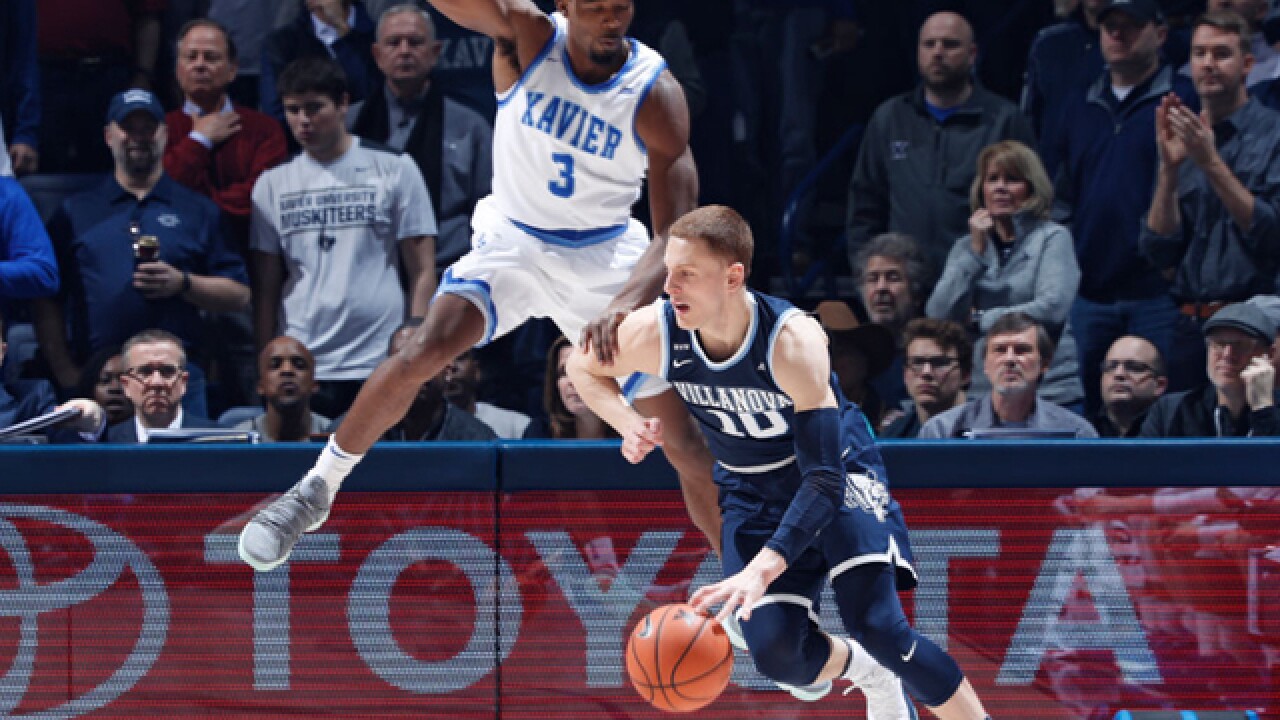 CINCINNATI -- As the three-point shots continued to fall for Villanova during the first half of Saturday’s game, Xavier seemed powerless to prevent them.

Mikal Bridges made four 3-pointers, Donte Divincenzo made three. The Wildcats went 11 of 19 from 3-point range during a 51-point first half.

Of those 11 long-range shots made by six different ‘Nova players, Musketeers coach Chris Mack estimated that eight were highly-contested.

“I don’t think we could have done much better,” Mack said.

Villanova led by 14 points at halftime before Xavier rallied to within three points early in the second half.

But the Wildcats pulled away for a 95-79 win, silencing the standing-room only crowd of 10,777 at Cintas Center.

“You tip your cap,” said Mack. “Then curse under your breath.”

It was an all-too familiar occurrence for the Musketeers: Villanova getting the best of them.

Xavier has beaten the Wildcats only once in eleven meetings since the teams joined the reconfigured Big East Conference in 2013, with losses by an average of 17 points.

The stakes were much higher on Saturday.

The Musketeers (24-4, 12-3 Big East) had an opportunity to take control of the Big East title race, and be in the driver’s seat for a No. 1 seed in the NCAA Tournament.

But, the defensive lapses that have plagued the Musketeers throughout most of this season cropped up once again.

Xavier allowed nine 3-pointers during a 65-point second half by Seton Hall in a 102-90 win on Wednesday. But Villanova wasn’t about to let them off the hook.

“When you play an elite level team, margin for error is razor thin,” Mack said. “I have to own the fact that we have to be better in those moments. We won’t be hanging our heads on Monday. We’re still playing for some things.”

Despite having limited depth after the loss of guard Phil Booth to a fractured hand last month, and playing most of Saturday’s game with foul trouble, Villanova still managed to have six players in double figures led by Bridges and Divincenzo who had 25 and 21 points respectively.

The Wildcats (24-3 11-3 Big East) cooled off a bit in the second half, going 5 of 15 from 3-point range, but the Musketeers couldn’t get enough stops on defense to complete their comeback.

“We were excited playing ‘Nova in our gym, and I think we came out too excited,” said freshman guard Naji Marshall. “Maybe it’s discouraging to play good defense and they still hit the shot. But, you just have to keep playing. We have to play a forty-minute game. We have to be tougher.”

After going 3 of 20 from 3-point range in a loss at Providence on Wednesday, the Wildcats came out red hot on Saturday to avoid its first two-game losing streak since the 2012-13 season.

“We wanted to send a message to ourselves,” said Divincenzo. “about getting back to playing Villanova basketball.”

And, a message to Xavier that the Wildcats aren’t about to relinquish supremacy in the Big East easily.

For all of Xavier’s success in the past decade or so – two Elite Eights, six Sweet 16 appearances, 11 NCAA Tournament trips – it continues to play second-fiddle to the Wildcats in the Big East.

But all is not lost for the Musketeers who still hold a half-game lead over the Wildcats in the Big East standings.

“You got to move on,” said Mack. “It was a dominant performance by Villanova. To me it was pretty simple. I thought we were playing hard. I didn’t think the (halftime) lead was insurmountable. Our guys came out with the proper mindset and cut the lead to three. You have to make your own breaks against an elite team.”

Third-ranked Villanova, which spent five weeks at No. 1 in the Associated Press poll before losing Booth, has four games remaining, including tough trips to Creighton and Seton Hall.

Fourth-ranked Xavier has three games remaining: at Georgetown, home against Providence, and at DePaul.

The Musketeers needed overtime to beat the Hoyas at Cintas earlier this month, lost to the Friars on the road in early January, and beat the Blue Demons by five at home.

“We can’t get down about this loss,” said Marshall. “We still have games to play. Our seniors want to do something we’ve never done, which is to win a Big East title. We just have to be tougher.”

But, with Villanova owning the tie-breaker over the Musketeers, the Big East title once again will go through Philadelphia. Xavier no longer controls its own destiny.

The Wildcats lead the all-time series against Xavier 26-5.

Saturday’s loss snapped Xavier’s nine-game winning streak and was its first loss this season at home.

Mack said last week the precedent of beating Villanova at home two seasons ago might help his team psychologically on Saturday, especially with seniors J.P. Macura and Trevon Bluiett playing well in that game as sophomores.

Macura and Bluiett responded with solid performances on Saturday. Macura scored 14 points and Bluiett added 26, to move past David West into second place on the school’s all-time scoring list on Saturday.

“He needed to score 43 points,” quipped Mack. “Then we would have won.”