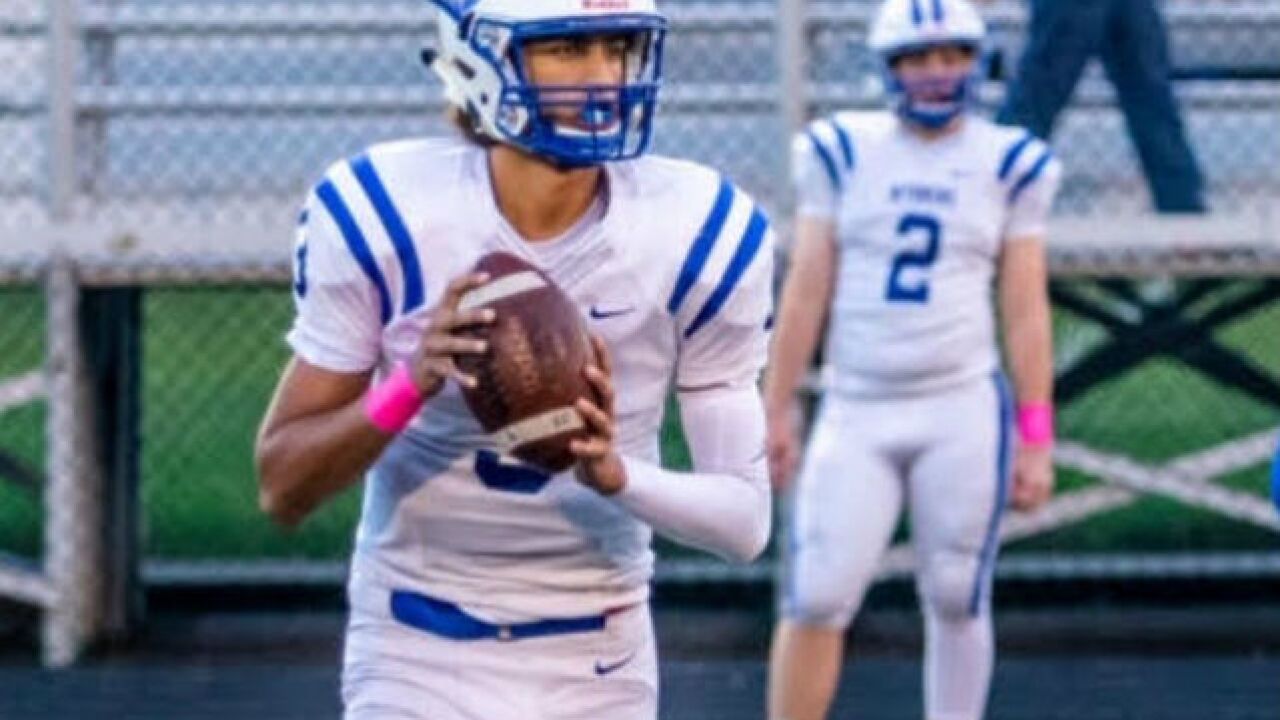 Copyright 2018 Scripps Media, Inc. All rights reserved. This material may not be published, broadcast, rewritten, or redistributed.
<p>Wyoming junior quarterback Evan Prater has scholarship offers that include Cincinnati, Pittsburgh, Akron and Toledo. (Photo by Rod Apfelbeck)</p>

WYOMING, Ohio – Wyoming senior Joey Edmonds knows where the football will be thrown when he breaks from his receiving route.

When your high school quarterback is Evan Prater, life is much easier.

“He’s a security blanket for me,” Wyoming offensive coordinator Keith Jordan said. “It’s pretty nice knowing when I call a play – even if it’s not the best play call – that he can make something happen. I trust him to make the right reads and get us in the right plays, and he’s done a tremendous job.”

Prater, a 6-foot-5, 190-pound Wyoming junior, was named the Division IV state offensive player of the year on Monday night. Prater, the son of former Forest Park High School standout tight end Gary Prater (Class of 1985), is a dual threat to run or throw, and his teammates know how much of an impact he has made.

“We’ve seen him work throughout the whole summer, and he’s been a leader for our team,” Wyoming senior wide receiver Moe Mitchell said. “Everyone in Wyoming knew this was possible. Now, everyone else is seeing it.”

Evan Prater, 16, has helped lead the Cowboys (14-0) to the Division IV state final Saturday night in Canton. They will play Girard (13-1) at 8 p.m. Saturday at Tom Benson Hall of Fame Stadium.

If you are looking for offense, then Saturday night’s state final will be the game to watch.

Girard senior quarterback Mark Waid, a Fordham commit, has thrown for 4,182 yards with 47 touchdowns. He has rushed for 1,744 yards and 26 touchdowns for the Indians, who are making their state football finals appearance.

“This is really obvious that this is going to be a show of the two best quarterbacks in Ohio right now,” said Mark Porter, director of ScoutingOhio.com.

Wyoming, which set a program record this season for the most wins (14) in its 100-year history, is making its first state football final appearance since 1977, when it won the 2A title.

Prater, the younger brother of Ohio State sophomore wide receiver Garyn Prater, is a significant reason why. Wyoming is 26-1 with him as the starting quarterback the past two seasons.

Prater has thrown for five touchdowns and rushed for four in the past two weeks.

Prater has scholarship offers that include the University of Cincinnati, Pittsburgh, Ohio University, Akron and Toledo. More schools will follow; Indiana and West Virginia have shown interest this week.

Prater doesn’t seem to mind the attention. He's also a basketball standout who has a scholarship offer from Wright State. But the recruiting attention can wait a week. Prater wants to lead Wyoming to its second state title in program history.

“My favorite memory probably of the season is having the opportunity to go up to Canton this weekend with these guys,” said Prater.

“I wouldn’t want to do it with any other group of people. I have been with these dudes since I was little – youth football and growing up together. We’ve all known that we are a special group of kids. I knew when they were seniors and I was a junior that we could get this done. Now we’re here, and I’m very excited to go up to Canton this weekend.”

Edmonds, who has 50 receptions for 912 yards this season, said the Cowboys have every bit of confidence in Prater each game.

“We trust him with everything," Edmonds said. "He’s what makes our offense go.”