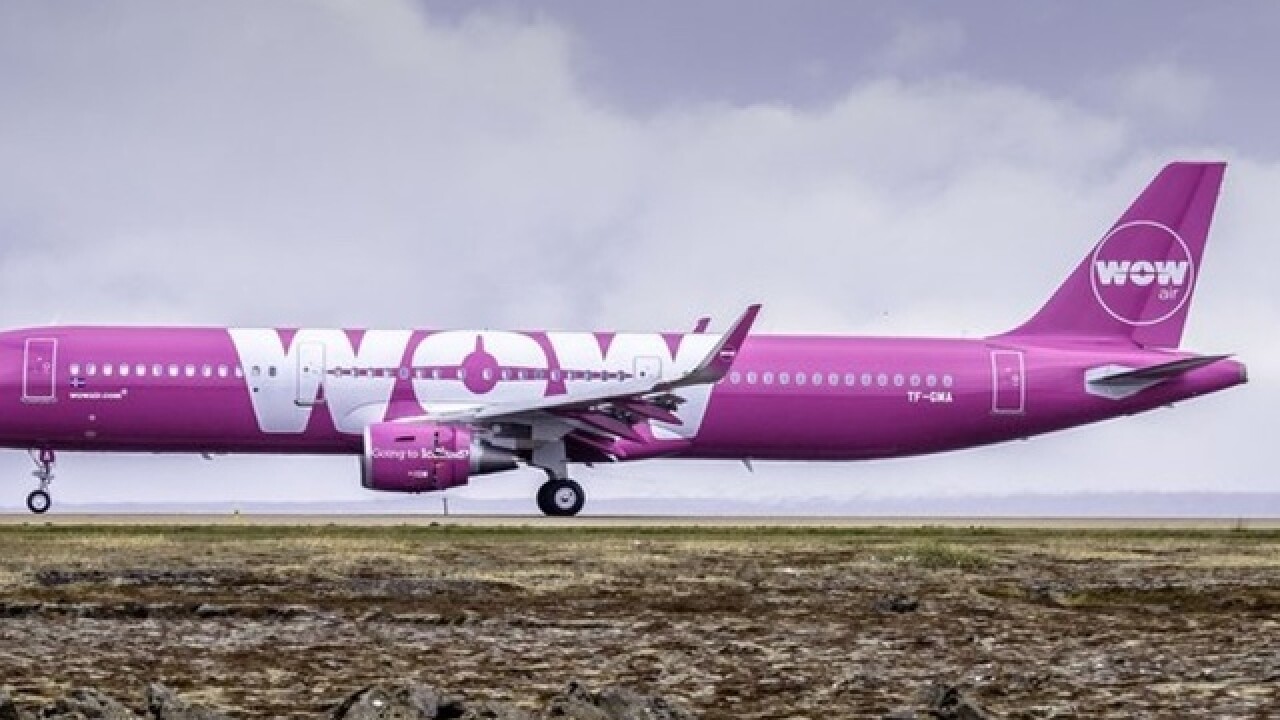 Copyright 2017 Scripps Media, Inc. All rights reserved. This material may not be published, broadcast, rewritten, or redistributed.
<p>WOW aircraft. Photo from the WOW air website.</p>

HEBRON, Ky. -- WOW air is adding a fifth weekly flight to its scheduled service from Cincinnati/Northern Kentucky International Airport – weeks before its scheduled launch this spring.

That tops news this week from the budget airline, which has released a list of top travel destinations for passengers flying in and out of CVG. While Iceland is certainly tops, several other European cities rank high -- including Delta Air Lines' overseas stronghold for the last 20 years.

WOW promises flights to Iceland and beyond on the cheap -- often with $99 one-way, rock bottom fares. It starts service in May at CVG.

A bulk of those flying from Cincinnati will make Iceland their final destination (47 percent), but other end points include Dublin (12 percent), London (12 percent), Paris (10 percent) and Amsterdam (8 percent).

Delta currently operates the only trans-Atlantic flight from CVG to a city that ranked high on both lists: Paris. The airline marked the 20th anniversary of that route in 2017.

WOW is slated to start service at CVG on Wednesday, May 9 -- specifically, its first inbound flight lands at 11:50 p.m. and departs at 12:50 a.m. Thursday, May 10. With the added service, WOW will now operate flights on Mondays, Tuesdays, Wednesdays, Thursdays and Saturdays. The airline connects to 20 European cities via Keflavik, Iceland -- WOW's headquarters -- as well as two destinations in the Canary Islands and Tel Aviv in the Middle East.

The fifth flight will be offered throughout the summer travel season, June 4-Sept. 17.

To celebrate the increase in seasonal flight service, WOW air is offering $99 one-way flights from CVG to Iceland (KEF) and $149 one-way flights from CVG to London (STN), Paris (CDG), Amsterdam (AMS), Frankfurt (FRA), Dublin (DUB), Berlin (SXF) and Copenhagen (CPH) via Iceland. The fare is available for travel from September to October, similar to a promotion the airline announced in recent weeks.

The carrier lives by the “ultra low-cost” operating model, which means WOW charges extra for most accommodations.

WOW said it would add service in three other Midwest cities when it announced service in Cincinnati in August, including St. Louis, Cleveland and Detroit. CVG to date has had the second-strongest ticket sales behind St. Louis, Spann said. WOW also added a fifth weekly flight in that market in January.

In Cincinnati, WOW, too, will recently upgraded its equipment in Cincinnati from a 200-seat to 208-seat Airbus A321 aircraft, presumably as a result of the early demand.

CVG meanwhile is gearing up its facilities for the launch. It will soon start modifications in the ticketing and gating areas to accommodate the new airline. WOW will utilize Concourse B, which is Delta's home base but also where American Airlines will land -- albeit temporarily -- come April as crews start a major ramp rehabilitation around Concourse A.

WOW passengers will board via Gate B9. Airport officials also plan to retrofit four ticket counters at the end of the terminal near Delta with WOW branding and more.

In other airport news: