Wonder who is attending the Trump fundraiser? Ask a Republican, but don't expect an answer 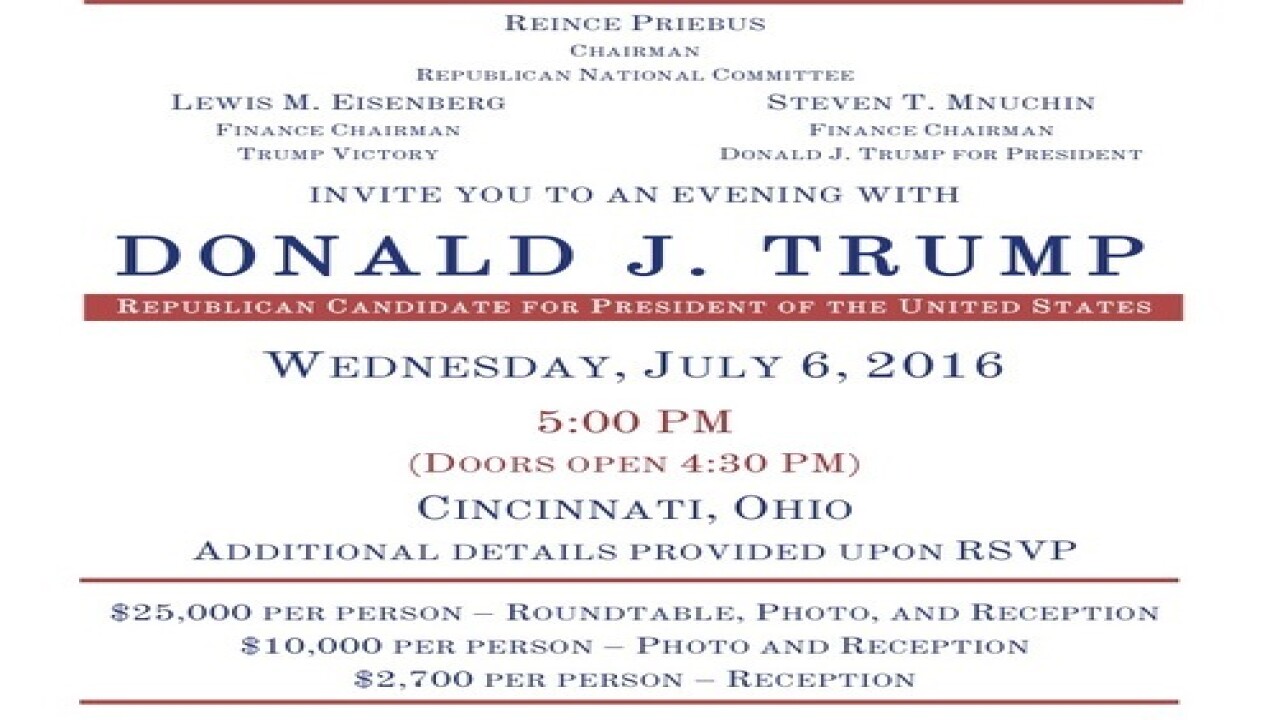 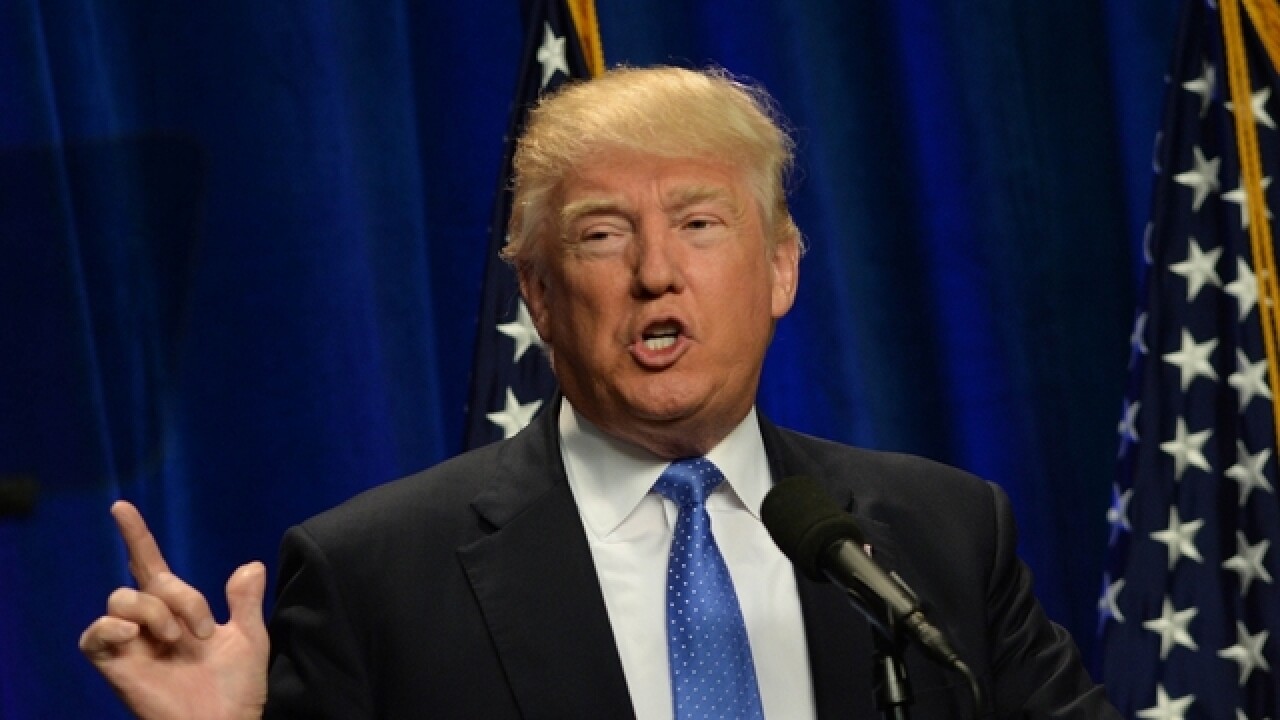 What’s the fastest way to silence a Republican?

Ask them if they are going to a Donald Trump fundraiser.

It may seem like a political joke, but it’s actually not.

When WCPO reached out to more than 30 Republican donors, supporters, elected leaders and candidates to ask if they would attend a fundraiser for Trump on Wednesday, the vast majority declined to comment or ignored the inquiry.

A few Republicans said they would be out of town or couldn’t afford the $2,700 ticket.

“I’m not aware of anyone attending the fundraiser on Wednesday,” said Alex Scharfetter, campaign manager for U.S. Rep. Brad Wenstrup, who noted that Wenstrup will be in session in Washington, D.C. this week.

"I'm not going, its beyond my price range. I'm on a very low budget," said Norbert Nadel, a Republican candidate for Hamilton County Recorder, who said he will attend Trump's rally at the Sharonville Convention Center on Wednesday night.

“If I had the money to burn I’d love to go. I think it would be very interesting,” said Andy Pappas, who is running for a seat on the Hamilton County Commission this fall.

“I don’t know anybody who is going,” Pappas said. “This event came together kind of quickly.”

WCPO broke the news of the upcoming fundraiser on June 27 – eight days ahead of the July 6 event.

Yet details about the 5 p.m. event remain uncharacteristically sparse. The Republican National Committee, which is hosting the event, referred comment to its state arm, the Ohio Victory Program, which also passed on commenting for this story.

So the event’s location and its guest list are still a mystery.

The strange quietness surrounding this fundraiser illustrates the tough spot many moderate Republicans are in this year. Some aren’t happy with Trump as the party’s presumptive nominee and are trying to distance themselves from the flamboyant and often polarizing entrepreneur. Yet many want to stay loyal to the party, and find the Democratic choice of Hillary Clinton far worse.

“In politics when you are faced with two unpleasant options, ideally what you want is to have no one pay attention to what side you choose,” said University of Cincinnati political science professor David Niven. “Just try to be quiet about it and see if you can survive personally, regardless of how things turn out.”

A slew of Republican leaders either declined to comment or ignored requests for comment about whether they will attend the Trump fundraiser, including Hamilton County Prosecutor Joe Deters and County Commissioner Dennis Deters. Council members Amy Murray and Charlie Winburn said they would not attend the fundraiser. County Commissioner Chris Monzel said he would be out of town.

In contrast, many local Democrats, such as Vice Mayor David Mann and State Rep. Denise Driehaus, were vocal about their attendance at a fundraising event for Clinton on June 26. Cincinnati Mayor John Cranley hosted the fundraiser at his home that raised $492,000 and attracted 270 donors.

And the local GOP seeks media attention when it comes to raising money for candidates other than Donald Trump.

For example, the Hamilton County GOP announced a fundraiser for Dennis Deters on July 7 – the day after Trump’s fundraiser – with a host committee of 23 prominent donors.

Coincidentally, many on these same donors were contacted by WCPO for comment on the Trump fundraiser and ignored the inquiry.

Not only are local Republicans keeping their mouths closed about Trump – they also haven’t been opening their wallets for him.

So far, Cincinnatians have been very stingy with their donations to Trump. Just 15 people donated a total of $5,792 to Trump’s campaign from 2015 through May, according to the latest campaign finance reports.

That meager purse is a stark contrast to how generous Cincinnatians have been to Republican presidential candidates in the past, federal election records show.

While local Republicans aren’t donating much to Trump, they are opening their wallets for Sen. Rob Portman, who faces a tough election this fall. He’s raised $1,222,294 from Cincinnatians in his campaign cycle so far.

“The party is going to say to loyalists who cannot stomach putting dollars behind Trump, ‘OK then, fund the Senate candidates we are fighting for dear life to keep,’” Niven said.

Federal campaign reports released two weeks ago show he started June with $1.3 million on hand – far less than the $42 million Clinton has in the bank.

“For a long time he has pretended he didn’t need the money,” Niven said. “We don’t tend to give money to entities who say they don’t need it.”

Trump recently launched a fundraising blitz and is traveling across the country in the weeks leading up to the Republican National Convention.

But Niven isn’t sure this will help.

“Trump’s biggest supporters don’t go to high dollar donor events,” Niven said. “He really missed the kind of $25 donor who likes Bernie Sanders. He never built that structure and he left tens of millions of dollars on the table.”

Linda Caudill, a volunteer for Trump from Delhi Township who decide to attend the fundraiser earlier this week, has spent several days making phone calls to Cincinnatians asking them to show up and donate.

She’s reaching out to contacts she made when she owned an insurance agency -- small business owners, doctors and lawyers who might be interested in supporting Trump.

“You’re going to see some different donors come forward,” Caudill said. “There are a lot of people who are unhappy right now and are probably going to be attending the fundraiser.”

She described a grassroots campaign, where volunteers make phone calls from their homes on Trump’s behalf and wear his shirts at local festivals.

In fact, Caudill used her own money to buy dozens of Trump T-shirts and hats, which she keeps in her car to hand out to potential voters.

“We don’t need that many people to do what we do,” Caudill said. “The volunteers, we buy his hats and T-shirts. It’s just a different environment. We don’t need that kind of (campaign) money, we step up to the plate for him.”