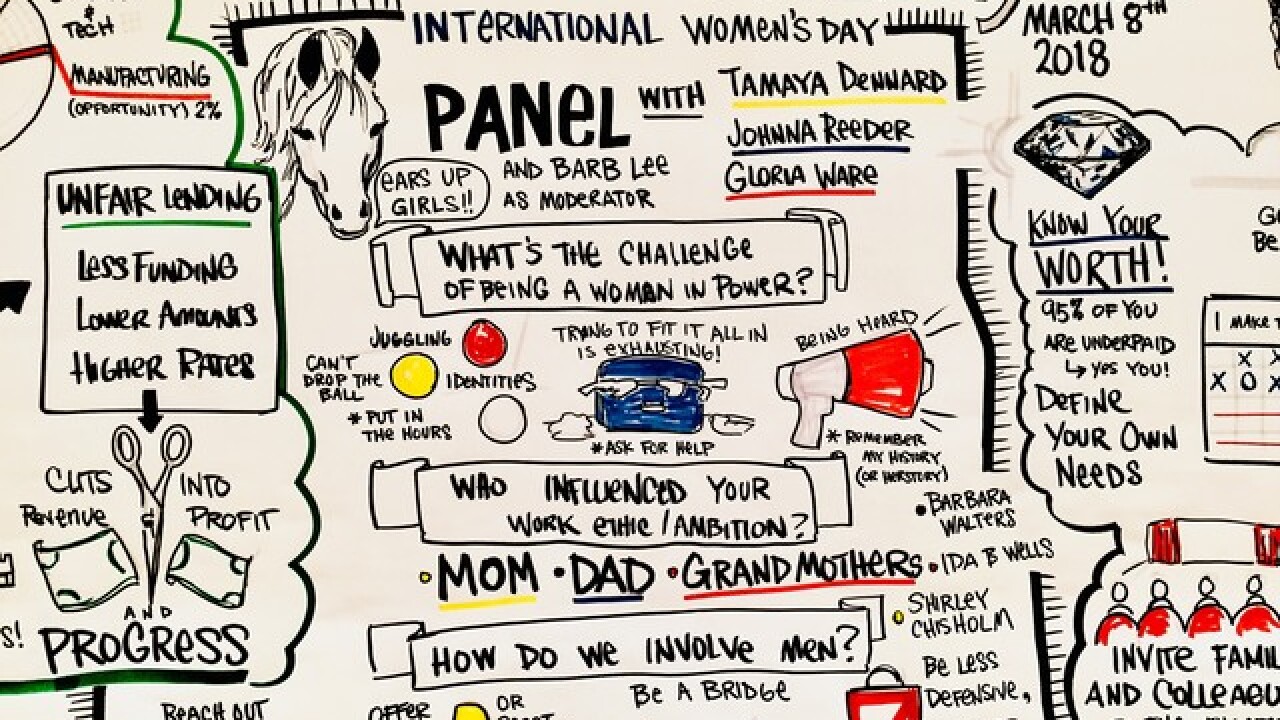 CINCINNATI -- Listen to Emily Chang discuss her Silicon Valley expose "Brotopia" and it's clear that startup Cincinnati also has a problem to fix when it comes to promoting, respecting and supporting female tech talent.

"I fully believe that the people who are taking us to Mars and creating self-driving cars can create a more diverse workforce," Chang said, speaking recently in Redwood City, California. " …  It needs to come from the top, and diversity needs to be a priority."

Chang's book might focus on Silicon Valley and the online payments company PayPal, but Cincinnati-based tech leaders like Wendy Lea, CEO of Cintrifuse, a startup support network, admits there's plenty of work to do in the Queen City.

"We (Cintrifuse) are not experts in diversity and inclusion," Lea told a capacity, female crowd during an International Women's Day breakfast at the Over-the-Rhine startup hub known as Union Hall. "But expect the following. We will continue to convene and connect in order to drive more innovation."

Lea describes Cintrifuse-led efforts as building a "SHEcosystem" and refers to a recent Mastercard Index of Women Entrepreneurs report as a source for key metrics and goals involving diversity and inclusivity.

What are the entrepreneurial conditions for women in Cincinnati? Is there true, financial inclusion? What are the advancement outcomes? More important, what's the cultural perception? How do women entrepreneurs view their chances for success with Cincinnati-area investors, other startups and the big corporations that work with them?

"The best way to support others is to engage and build a support network," Crenshaw said. "I have a female founder group I meet with every two weeks. They are my tribe. The women in my group are founders of their own tech startups and face similar challenges day-to-day. They support me both personally and professionally. Each of us dedicate time to reaching out to other female founders to ensure we are making other women aware of support as well as teaching others to build their own tribe. Startup Cincy rises into the national spotlight only when we are a solid support system. That means networking with one another and giving out the most valuable asset to others: time."

As dog-eared copies of Chang's "Brotopia" get passed from one entrepreneur to another, the action steps needed to help transform Cincinnati from a "brotopia" into a diverse and fair entrepreneurial ecosystem become clear: VC firms need to hire more women. VCs need to fund more women. Most of all, women need to get bigger paychecks.

Although the female-to-male earnings gap in pay has narrowed to 80.5%, thanks partly to the increasing number of women in the workplace, Crenshaw said she sees a way for female tech leaders to continue to close the gender gap.

"We are all examples of how to break the mold," Crenshaw said. "As we build and scale our businesses, we need to ensure that we are leading gender-neutral pay. The gender pay gap continues to exist because we are not putting conscious thought into how we compensate our employees. We have to be part of the solution by creating compensation structures for our roles that are structured in a more rigid way so that they maintain gender neutrality. It's not about paying women more; it's about how we structure our compensation models that ensure neutrality."

During her talk, Chang also delivered a call-to-action specific to men in tech startup ecosystems. She called for male entrepreneurs to:

According to Ashley Keating, chief financial officer at CincyTech, a leading Southwest Ohio-focused seed fund, when women entrepreneurs need to lead by example when they are in a position to influence and make an impact.

"Encourage women to ask questions and have a voice," Keating said. "Find a rising star and be sure to support her. Help connect her to more people in your network, especially meaningful people who have been your mentors or influencers. Don't talk to your female colleagues only about the weather, cooking and kids and then turn to your male colleague and start talking about the business meeting you just had."

With Women's History Month coming to a close, with numerous Women in Digital meet ups and workshops along with the social-media posts promoting networking, Keating emphasized that no one event or month's worth of female-led business conferences will move beyond #PressforProgress hashtags and ignite real work-culture change. Like building a startup, it's a long journey.

"It is about a steady, daily drumbeat," continued Keating. "Lead by example. Be open to someone reaching out for a mentor. Think about whether someone's gender is influencing your everyday actions. Make conscious choices to challenge us.

"More important, find a team that challenges you so you 'walk the talk.' Support those in the ecosystem now, but also look to the pipeline. Teach a message to kids in middle school so the seed is planted early. Pay it forward a generation."

Looking for mentors and entrepreneurs to ignite your support network?

Here are some additional female tech leaders to seek and meet.

"I think one of the challenges as a female entrepreneur is feeling alone. Entrepreneurs often have a sense of imposter syndrome, where they feel like they shouldn't be in their position. We all need to see others succeeding. We also need to have a sense of support in the community. Regardless of success or failure, we should feel that startup Cincy is a community of support. One thing Silicon Valley does very well is celebrating failures just as much as successes. A failed business in the Valley shows you to be an entrepreneur that has learned a lot. Knowing we have an ecosystem that will absorb entrepreneurs if they have a failure is just as important as supporting each other to success."