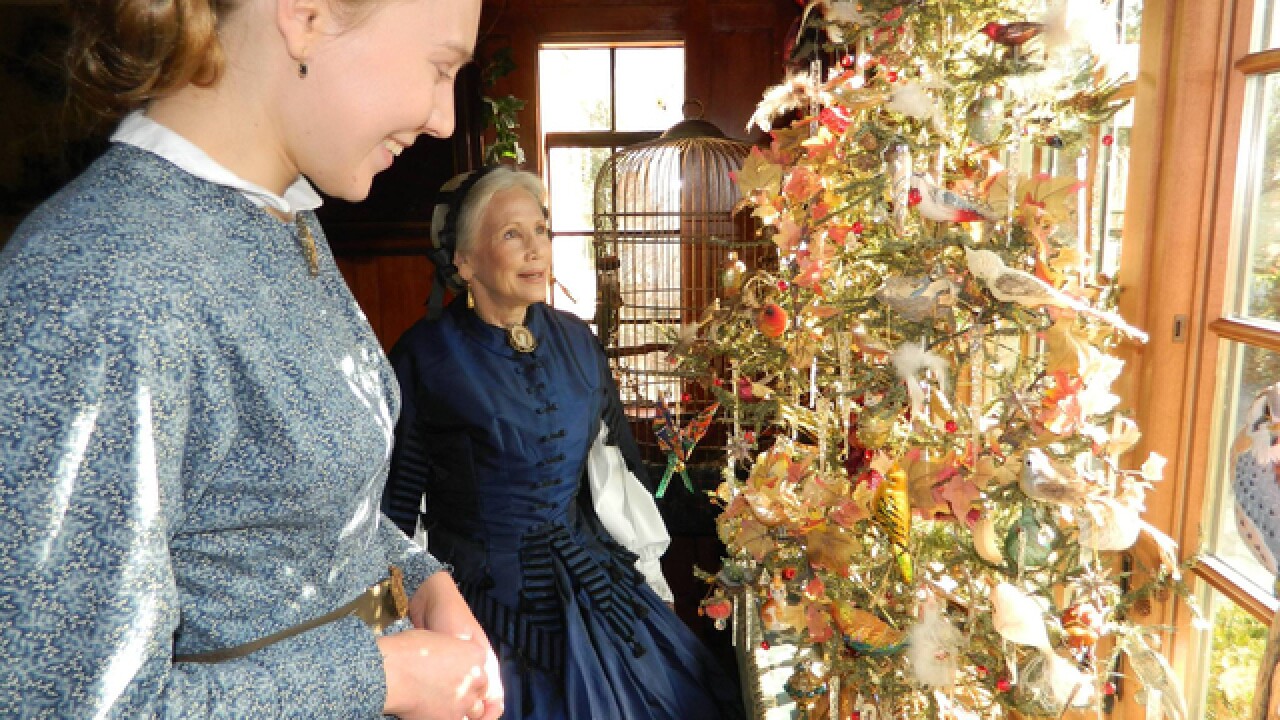 Copyright 2017 Scripps Media, Inc. All rights reserved. This material may not be published, broadcast, rewritten, or redistributed.
Contributed
Heather Pfeiffer (left) wears an example of a cotton work dress while Margo Jang, president of the Ladies Living History Society, is dressed in navy silk for receiving company.

A slender hand surrounded in lace pulls the door open and suddenly, you’re transported to a different era. Jang’s silver-white hair is tucked neatly back in a snood, a sort of elaborate hair net, trimmed with velvet ribbons.

Her navy blue silk skirt swishes as she walks, black velvet trimmings swaying with her. A large brooch is clipped at her throat, and brass drop earrings dangle from each ear. Her waist is cinched but her skirt is voluminous, buoyed by several steel hoops.

Despite the somewhat complicated underpinnings of her outfit, Jang takes a seat in an antique chair. As the president of the Ladies Living History Society of Greater Cincinnati, she’s had a lot of practice.

When the society was founded in 1993, there were no civilian historical reenactment groups in Cincinnati. Living history groups were confined to men who wanted to reenact battles from the Civil War.

“If you wanted to do the 1860s and be a soldier, there were plenty of groups for that,” said Dana Gagnon, one of the most active members of the society.

Just as they did in the 1860s, the modern day "soldiers" are divided into regiments with commanders who dictate the uniform. When the wives of the 6th Ohio regiment attended historical reenactments of battles and other Civil War events, they started to wonder what an 1860s female group would look like. That’s when the society was born.

“The nice thing about being a civilian group is that we get to tell more of the story,” said Gagnon. “There’s one part of the story told over and over again.”

The society meets monthly to learn and talk about their research together. The women research the food, clothes and pastimes of the 1860s, as well as historical figures from the era.

One of the goals of the society is to educate the public that women served Cincinnati in many ways during the Civil War. Aside from raising their families, women worked in munitions factories and ran their husbands’ farms and businesses.

“When you talk about women in the Civil War, you talk about undercover soldiers, nurses and spies, but women were on the home front running everything,” said Gagnon.

In the 1860s, women also hosted charitable events to raise resources for soldiers. In Cincinnati, women hosted an elaborate event called the Great Western Sanitary Fair to raise money to improve the living conditions for soldiers. The fair was a citywide event that shut down the streets of Cincinnati for weeks at a time.

“It was a big expo filled with fun activities for people to do,” said Jang. “They would let the children out of school. They would have magnificent art displays and whatever they had that people would pay to see.”

As the society grew, the idea for a group dedicated to young women emerged and eventually became the Western Female Seminary Living History Society. Named for the famous women’s college in Oxford, Ohio, the group welcomes girls ages 14 and up. Dana Gagnon is in charge of the girls’ group, often posing as the famed principal of the Western Female Seminary Society, Helen Peabody.

Both groups focus on the 1860s because Cincinnati has such a rich history in that decade; however, the members are open to exploring other periods if the opportunities arise. Society members attend local history-oriented events in order to educate other attendants as well as provide a more immersive experience.

“Other groups find out about us and they say, ‘You add to our event. You’re educating not only the public but our own docents,’" Gagnon said.

The young ladies participate in educating the public as well.

“Learning to interact with the public, giving tours to people who are much older -- it definitely builds confidence,” said Gagnon. “One of our goals is to make sure they understand that when we’re at a public event, your purpose is to educate.”

Caitlin Gagnon, Dana’s daughter, started giving tours at historical events at age 8 and joined the young women's group at age 12. At 23, she holds a decidedly modern degree in media but said that she still uses the antique skills she learned in the group.

“I still use the etiquette that we learned, and knowing the historical context of different things is really helpful,” said Caitlin. “I still use the clothing skills we learned, like the clothes we wear are custom-fitted to our bodies. Now I know how to buy modern clothes that are flattering to my body.”

Fashion and an authentic 19th-century exterior -- and interior -- are hallmarks of both the society and the young women's group. In order to attend events, authenticity is paramount. Luckily, the present members are more than willing to help newcomers find dresses that meet the standards of the 1860s.

“Both groups are private and that allows us to invite people who are willing,” said Gagnon. “And we’re willing to help them make it affordable. Yes, you have to be accurate, but that doesn’t mean it has to be exclusive.”

Some women prefer to have their dresses professionally made, using inspiration from actual dresses worn in the 19th century. The young ladies, however, spend time learning the industries and crafts of the time, including making clothing.

“In the high school and young ladies’ group, we usually make our own (dresses),” said Gagnon. “We do that to make the hobby more affordable and to stay accurate.”

The society does a fashion show every year to educate people about the many layers that Civil War era clothing entailed. Gagnon said that the underpinnings of 19th century clothing are seen as constricting or uncomfortable. However, the interior structures of a dress like steel hoops and corsets were actually pivotal to make the many layers of clothing comfortable.

“Corsets get a bad rap that has nothing to do with their historical use,” said Gagnon with a laugh. “The tight lacing didn’t really happen until much later and was very much a high-fashion thing. Corsets should support you, not stop your breathing.”

Though the women may be “straight-laced,” the group is ultimately about friendship and fun. Naturally their idea of fun correlates to the fun women would have had in the 19th century. At their monthly meetings, they might partake in some 1860s entertainment like parlor games or skits. While they have fun, members enjoy tea and authentic Civil War era food, which was surprisingly rich, diverse and delicious.

“In 1788, when people were first arriving to this area, people had basic things like cornbread,” said Gagnon. “In the 1860s, Cincinnati was the Queen City. You have your basic lunch of summer sausage, bread and cheese, but there are also so many pies and sweet things to enjoy.”

Gagnon explained that although the group loves history, there’s a balance between immersion in the 19th century and their affinity for 2017 amenities.

“We like technology, we like things like modern plumbing,” said Gagnon, laughing. “But when you step in an event for the day, you have to put away your phone and right there, you’re detached from all that stress. You put that aside and interact with the people around you.”

If you’re interested in seeing the ladies all dressed up and having some good, old-fashioned (literally) fun, both groups will be ice skating on Fountain Square on New Year’s Day at 2 p.m.