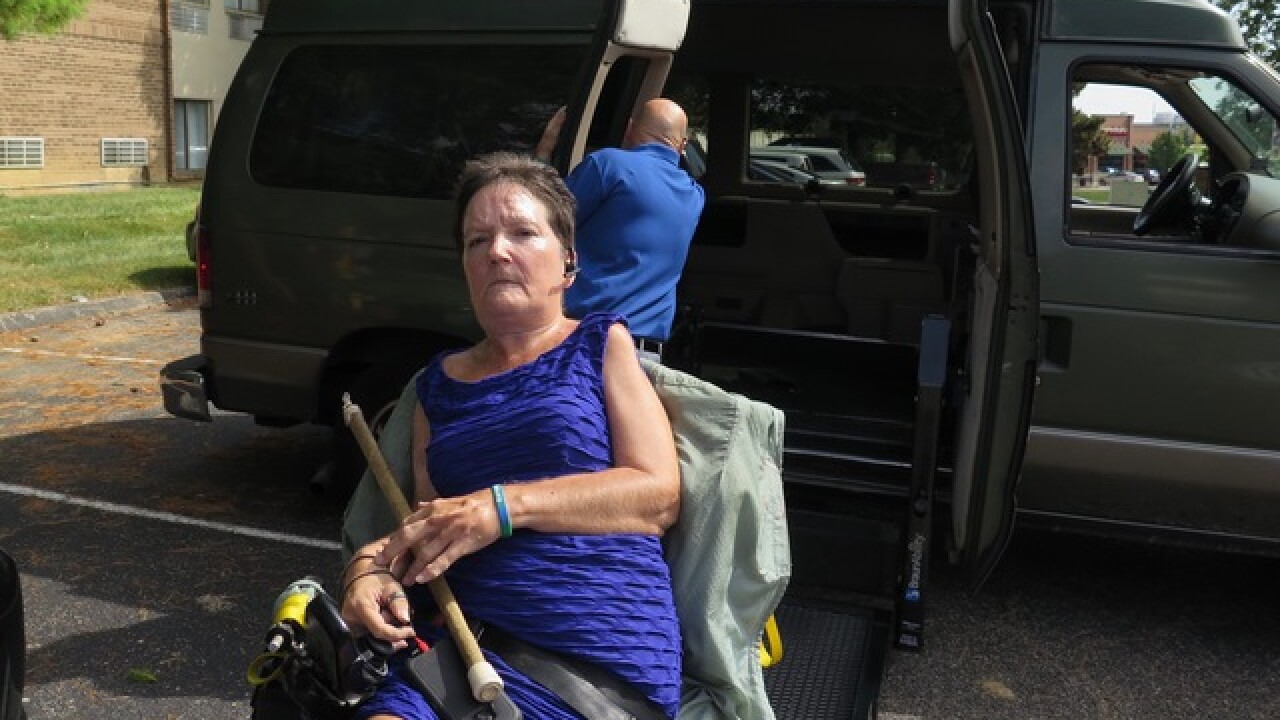 Copyright 2017 Scripps Media, Inc. All rights reserved. This material may not be published, broadcast, rewritten, or redistributed.
Lucy May | WCPO
<p>Jessica Scully said she has had problems with the wheelchair lift on her van since 2014.</p>

CINCINNATI -- A local woman with a rare, disabling genetic condition has filed a federal lawsuit against 19 Hamilton County officials and service providers, charging them with discrimination under the Americans with Disabilities Act.

In the lawsuit, Jessica Scully alleges a variety of discriminatory practices that have caused her “extreme emotional distress that has made her suicidal.” The allegations include:

• Hamilton County DDS “provided the wrong benefit, aid, or services required by someone with her disabilities.”

• The Southwest Ohio Regional Transit Authority, or SORTA, denied her access to public transit that she is entitled to receive.

• Hamilton County commissioners and DDS board members and staff allowed the problems to continue despite Scully’s repeated complaints and requests for help.

• Generations of Providers, a home health care services provider, breached its “standard duty of care” when its staff failed to show up for overnight shifts, failed to tell Scully that her home had become infested with bedbugs and hired a service provider who stole Scully’s credit card while on duty.

• And M.C. Mobility Systems, a van modification and lift installation service, was negligent in its work installing a lift system and wheelchair-locking mechanism for Scully’s van.

The lawsuit states Scully is seeking compensatory damages in excess of $100,000 for actual losses because of emotional distress, pain and suffering. The lawsuit also asks the court to order DDS to purchase a new wheelchair for Scully and seeks attorney fees as well as punitive damages in excess of $100,000 for “intentional discrimination.” The lawsuit doesn't specify how monetary damages would be paid by the various defendants.

WCPO reached out to the defendants named in the lawsuit, but Scully’s attorneys said the defendants likely would not receive official notification of the complaint until next week.

Scully said she has spent years trying to get her problems resolved with the county officials and organizations that she is suing.

“It’s hard for me to realize that I have to sue for something,” she told WCPO. “I’ve been disabled all my life. It’s upsetting to me.”

Scully’s lawyer, Susan Dunn, said they opted to sue so many people individually “to get somebody’s attention.”

“She’s entitled to money damages for the way she’s been treated,” said Dunn, the senior partner at Dunn Law . “She hasn’t been treated equally.”

Scully has fibrodysplasia ossificans progressiva, more commonly known as FOP. The rare, genetic condition causes bone to form in muscles, tendons, ligaments and other connective tissue. Over time, the new bone restricts patients’ movement, fusing their bodies into static positions. That is why FOP also is called "stone man syndrome."

Once the new bone forms, it cannot be removed because surgery triggers more bone to form. There is no treatment for FOP, and there are only 800 known cases of the condition in the world, according to the International Fibrodysplasia Ossificans Progressiva Association .

She worked as an accountant at the University of Cincinnati until 1999 when she had to retire because of her deteriorating health. Scully funded the bulk of her own medical care as long as she could, she said, depleting her retirement savings. In 2009, she began receiving aid through Hamilton County DDS, according to the lawsuit, and the problems began almost immediately.

She had problems getting the kind of bed she needed, according to the lawsuit.

Because she can’t move much of her body, Scully needed a bed that was fully electric with elevating feet, elevating head and that could move up and down to make it easier for the caregiver.

She got a bed on Aug. 8, 2011, but she had problems with it from the start. Within the first year, it wouldn’t elevate properly. The air mattress on the bed also leaked and had to be taped up with duct tape. The warranty on the bed stated that it wouldn’t take effect unless the bed was completely paid for within the calendar year, however, and Hamilton County DDS didn’t pay its portion of the cost of the bed until October 2012, according to the lawsuit.

That delay meant the repairs were not covered under the warranty for the repairs. But when Scully asked for DDS to pay to have the bed fixed, the agency refused, according to the lawsuit.

The bed stopped working in late November of 2014, but DDS didn’t replace it until February 2015. DDS also installed a $7,000 lift that Scully said she didn’t request and didn’t need, using up some of the limited funds set aside for her care.

Scully also has had problems with the wheelchair lift for her van.

The lawsuit states that DDS paid for a new lift in 2014 to handle the weight of a heavier wheelchair she needed as her condition worsened.

Within a month of the installation, according to the lawsuit: “Plaintiff informed DDS that she had serious concerns about her safety when using the vehicle lift. Because of the height of the entrance where the lift brings Plaintiff into the van, she is practically required to lie horizontally in order to get into the van. Doing so makes it impossible to see what she’s doing when moving her chair into the vehicle via the lift. Further, the lift has no guard railings, so that as she is moving blindly she is under constant threat of guiding the chair off the lift and falling which would cause her catastrophic injury.”

It further states: “DDS has been deaf to her repeated complaints about these safety concerns.”

Scully can only move her fingers at this point, but she didn’t file the lawsuit to get sympathy, she said.

She said she’s concerned that scores of people with disabilities in Hamilton County are not getting the services and support that they need and are entitled to get.

“I want to change this for a lot of people,” she said.

Scully is especially worried about people with intellectual disabilities who can’t advocate for themselves, she said, and about parents of children with disabilities because she doesn’t think those parents aren’t getting the information they need to prepare their children for adulthood.

“We are seeking money damages because she has been hurt, but we are hoping that we can wake some people up and that they begin to treat the disabled in this community with the respect they need,” Dunn said.

Because of Scully’s low income, her attorneys have requested that federal marshals deliver notice of the lawsuit to all the defendants. The defendants might not receive the lawsuit until next week as a result, she said.

The defendants that returned WCPO’s calls and emails said they could not comment because they had not seen the complaint yet. The lawsuit names the following defendants:

• The board of directors of Hamilton County DDS

• Nestor Melnyk, president of the board

• Andrew Magenheim, vice president of the board

• April Flagler, secretary of the board

• Hamilton County Board of Commissioners