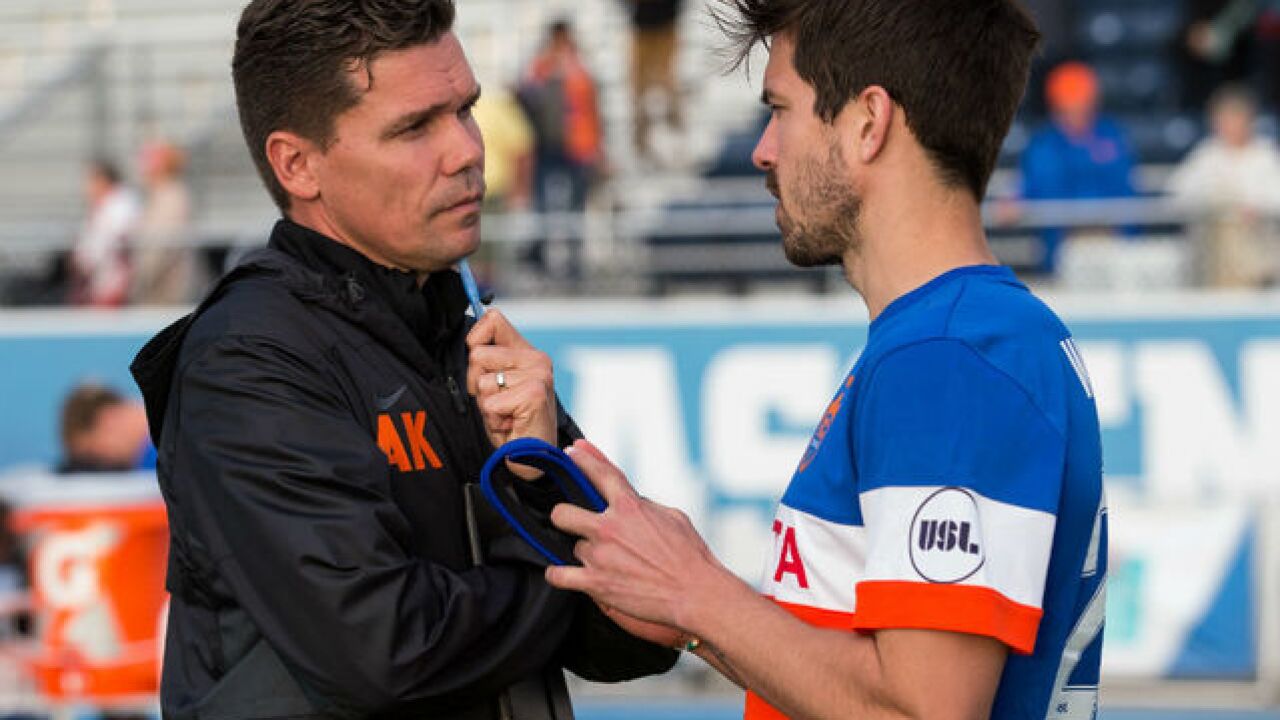 He simply hasn't had time.

With the United Soccer League season set to begin in less than a month, Koch has much work to do to continue assessing players, implement his systems and bring his vision for the club's second season to fruition.

FC Cincinnati hired the former Vancouver Whitecaps 2 manager as an assistant coach and director of scouting and analytics in December, and he had only actually been working with the players for a few weeks before the sudden firing of John Harkes on Feb. 17. Koch was immediately promoted, and the next day FC Cincinnati left for its preseason training trip at IMG Academy in Bradenton, Florida, where the club went 0-2-1 against some quality competition.

"I guess I was the benefactor of circumstances," Koch said Monday in a phone interview from Florida, where the club remained leading up to its exhibition at Sacramento Republic on Saturday.

"Thankfully, I've been a head coach for almost 15 years now," he said, "so I have a great body of work I can rely on to get the ship going in the right direction. In terms of having a plan and how we want to go about it, I have that in place and we're trying to execute it now on a daily basis."

Koch has never moved from an assistant position to head coach like this, but he has taken over teams just before the season.

He was hired as the Whitecaps 2 manager just weeks before the 2015 season -- the club's inaugural season -- and guided the club to its first playoff wins last year before it fell in the Western Conference final to USL Cup finalist Swope Park. Koch's other head coaching experience included stints at Simon Fraser University, an NCAA Division II school in Canada, where he compiled a record of 126-21-7 in seven seasons, and Baker University in Kansas.

"We are pleased to have someone with Alan's resume joining FC Cincinnati," president and general manager Jeff Berding said when Koch was originally hired. "We feel his ability to develop young talent and his experience in the areas of scouting, analytics, as well as with an MLS youth academy are key to the long-term advancement of the club. His familiarity with the USL and his background as a head coach in our league brings a level of expertise that will help us in continuing to bring professional soccer at the highest level to Cincinnati."

That head coaching experience is especially valuable now, but as prepared as Koch feels to handle the transition, it still came as a surprise.

"I think collectively as a group, the players and staff, we've all had to deal with it very, very quickly and move forward," he said. "We have a season to play that starts in a few weeks, so we are building towards it. Last year gave the club a nice platform, but now we really need to build and make sure we take the steps to move forward even more. It's that end process, and the league is getting better, too. That's going to be a major challenge."

As a native of Durban, South Africa, who played collegiately at SFU, Koch brings a unique perspective to the game.

He played professionally in the South African first division with Reservoir Hills United and also signed with Preussen Krefeld in the German fourth division before adding a stint with Limerick FC in Ireland's first division.

"I feel my own personal journey shows really what the sport is about," Koch said. "It's a global game, and I've managed to play or coach the game in six different countries. Those experiences are things I've tapped into to create my own coaching philosophy and how it's molded me as a person. I wouldn't change those experiences for the world, but it's also given me a very broad perspective on the game and allowed me to work with players from all sorts of different backgrounds."

Koch had been drawn to Cincinnati after watching from afar as the club made global headlines with its record-breaking attendance and on-field success.

Though it was probably considered a step down, going from manager to assistant, he was intrigued by the opportunity to have a hand in growing the club in many different facets.

"It was pretty remarkable how quickly the club built up an amazing fan base and really started to create something pretty special," Koch said. "When you see something like that happening in the soccer landscape, you're definitely aware of it, so when the opportunity came to be part of it, not only as an assistant but also as director of scouting and to help the club grow in a positive direction, that was something I was very interested in."

But even after his hire in December, Koch had some work to finish with Vancouver's Major League Soccer side, for which he served as a scout. He was responsible for helping the club prepare for the SuperDraft on Jan. 13 and had to finish up those obligations before diving full in with FC Cincinnati.

While he was completing his tasks in Vancouver, Koch said, he also was doing his own synopsis of what FC Cincinnati's team looked like. He watched every game from last year to review players' strengths and weaknesses so he was up to speed before the team stepped onto the field for its first preseason training session Feb. 1. He also had a hand in the recruiting and signing of all nine newcomers to the team.

"I think I had a very good idea what the group looked like, but obviously, until you actually start working with the team day in and day out, you aren't going to know exactly what the group looks like," said Koch, whose wife, Amy, and youngest daughter, 16-year-old Aurora, will remain in Vancouver until the end of the school year. "When I came in as an assistant coach, it gave me an idea what the players were like, but your role between assistant and head coach are very different.

"As a head coach, we've really hit the ground running the last week and really are making sure we're assessing the players completely and giving them constructive feedback about what they're doing well and what they are not doing well and we're starting to implement a system of play and really working to get the group up to the match fitness level they need to be at. We're a little behind the 8-ball, but thankfully we have four more weeks to go until the start of the season."

FC Cincinnati midfielder Jimmy McLaughlin, one of the club's 17 returners, said the players had an idea what to expect from Koch based on the first three weeks of training with him as an assistant on Harkes' staff.

Despite the sudden change, the transition has gone smoothly, he said.

"It's always a surprise when you have a change in coach, but we have to be professional about it and do what we need to do to prepare for the season," McLaughlin said. "I learned a lot from Harkes. I had a good relationship with him, but I've got a good relationship with Koch, and now we're just working to learn his systems and adjust as quickly as we can."

McLaughlin said Koch and Harkes "definitely have a lot of similarities" in how they like to play, and Koch brings the same principles of an attacking, possession-based style that the club grew familiar with last year -- but with his "own little nuances."

Koch said every team he's coached "has always scored a lot of goals." He described his style as a "very attacking type of soccer, possession-based with an outcome, but also very organized." He added that FC Cincinnati will build on the system Harkes implemented but will also be flexible enough to change depending on the opponent or flow of the game.

"If you look at the way we play, and for the fans that have watched, you'll see there is a structure we are trying to start with as our first building block, and we will build from how we play out of possession and then once we've picked that up we'll move to however we are going to possess the ball," Koch said. "There is a methodology for how we are trying to help prepare the team for the season."

Despite dropping its first two games under Koch this preseason, FC Cincinnati saw some positives, including scoring five goals in three games, and both Koch and McLaughlin said it was a productive first week in Florida.

"Not everything is going to be perfect," McLaughlin said. "Of course you want to win every game, but preseason games are basically training sessions where we are working on ideas, trying different player combinations and getting our fitness level up. It's a work in progress, and we will continue building on each game."

Koch said it was a good time for bonding, as well, which is something the club needs to do quickly given the circumstances.

"It's obviously been a challenging week to go through a coaching transition and then to come down here and have to embrace playing high-level competition right away to start the preseason," Koch said. "I've been really impressed with the players' resilience and character they've shown. … I feel we've taken a big step forward, but now we need to take an even bigger step forward this next week and keep building on that.