With MLS coming to town, Cincinnati will be the smallest US market to support 3 major-league teams 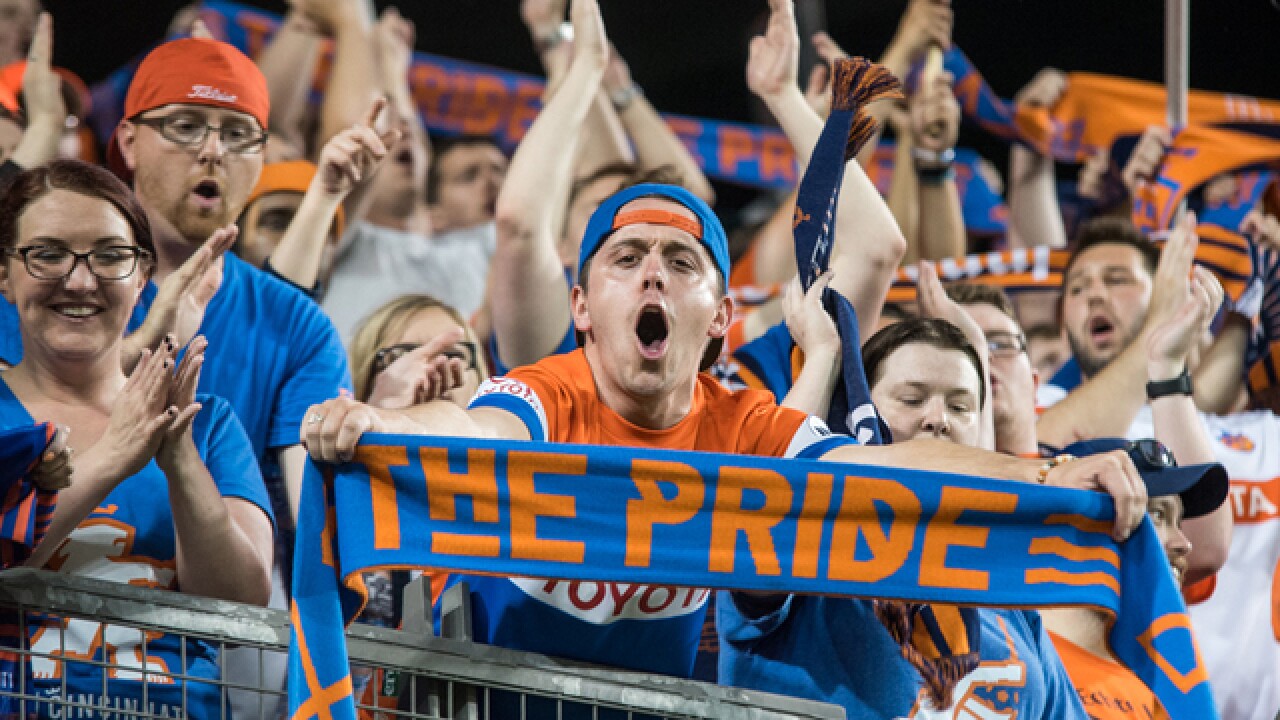 Copyright 2017 Scripps Media, Inc. All rights reserved. This material may not be published, broadcast, rewritten, or redistributed.
Phil Didion | WCPO contributor
<p>The Bailey, located behind the north endline of the pitch, holds 1,700 fans, about a third of them members of The Pride and Die Innenstadt supporters groups, who sing, chant, taunt and beat drums throughout FC Cincinnati home games.</p><p> </p>

CINCINNATI -- If you buy the idea that soccer has joined baseball, football, basketball and hockey as a fifth major professional sport in America -- an argument that gains strength almost daily -- then Cincinnati is soon to become the smallest metro area in the country with three or more big-league franchises.

When the meteorically popular FC Cincinnati enters Major League Soccer in just seven months, joining the Reds and Bengals in our pro sports pantheon, it should be a big moment for civic pride. For the first time in almost 50 years, we'll have as many teams as Cleveland or Pittsburgh.

Cincinnati was a three-team city once before, with the 1968 birth of the Bengals, but that ended just four years later, when the NBA Royals booked it for Kansas City. As FC Cincinnati comes into play, there will be long-term questions of whether we can economically sustain this alongside much curiosity as to how the three teams will compete for the loyalty of fans.

The designation of "smallest three-team metro area" employed for this article is based on the key sports metric of TV market size. Metro Cincinnati in 2018 is ranked No. 35 nationally, well below the aforementioned markets of Cleveland (19), St. Louis (21) and Pittsburgh (24), according to the NFL Record & Fact Book.

Below our No. 35 spot, only three markets (Milwaukee, New Orleans and Buffalo) have even as many as two big-league clubs.

The concept of a three-way tug for fan loyalty might be premature in another city with established baseball and football teams and a brand-new soccer club. The NFL and MLB still significantly outpace MLS nationwide in brand recognition. In the Queen City, however, fan fatigue is real for the two big guys.

The Reds are headed for a fourth-straight last-place finish in the National League Central Division, and the Bengals hold the dubious active NFL streak of most years without a playoff win (27). FC Cincinnati, in contrast, is the hot new thing, having tapped an astoundingly large well of local soccer interest, drawing crowds in the second-tier United League that have outpaced most MLS clubs.

"It's a good time to be the new team in Cincinnati," said Darren Rovell, an ESPN sports business analyst who is also on the advisory board for graduate sports programs at Northwestern University. "People do care about winning, and expansion teams have done very well recently in MLS."

"If it's not there yet, it's certainly close," he said. "Atlanta is going nuts for soccer. You walk around Atlanta, and you see that Atlanta United is definitely in play with the other teams (MLB Braves, NFL Falcons, NBA Hawks). You know when there's a United game in town. Portland and Seattle have excellent support. I've been impressed with what I see in Houston and Harrison, N.J. (New York Red Bulls) and also NYCFC."

No doubt, across the country, many casual fans who could name multiple stars in both football and baseball would whiff on identifying a single performer from MLS. NFL television ratings still leave MLS in the dust. However, Rovell said MLS can be the fifth major sport while still being years away from catching up in all metrics with the NFL and MLB.

"I don't know if (fully catching up) ever happens," he said. "But that's OK. Hockey is a niche sport compared to football and baseball, and they're OK with that. Nothing replaces hockey for their fan base. And (MLS commissioner) Don Garber can be OK with that for now. They're the next big thing, they have plenty of teams easily drawing 15,000 or more (in range of what NBA and NHL teams draw) and they've got people wanting expansion franchises at $100 million-plus."

Another sports business pro who sees MLS as the fifth major sport is Don Schumacher of Cincinnati. Schumacher has spent more than 30 years focusing on all aspects of the sport tourism industry. He founded the Greater Cincinnati Sports and Events Commission in 1988, and after that body ceased operation in 1998, he was one of the founders of the National Association of Sports Commissions.

"I do buy MLS as major league, right now," Schumacher said. "I would contend there are at least as many, or probably more, strong soccer fans in this market than strong NFL or MLB fans.

"My job enabled me to watch youth soccer become the biggest travel sport in the U.S. When those parents and kids are at home and have a chance to see the best soccer in the U.S., they're going to go. There's live soccer from around the world all over TV now, and those kids are watching. They know the players, even if we older folks don't yet."

Despite the Reds' and Bengals' current doldrums, Schumacher doesn't see the addition of MLS as a direct threat to those clubs.

"The Reds and Bengals may have ticket concerns right now," he said, "but I don't see any concerns directly related to FCC. I don't think there's a significant crossover with the FCC fan base. And I think sponsors and advertisers will come to see they're reaching a different audience through FCC, so that should give some comfort to all three teams."

"The No. 1 challenge for the four established sports is simple," said Andrew Brandt, who has an extensive national background in sports law and business journalist as well as experience in academia and as a pro football executive. "How do they attract younger audiences? With the consumer consumption model having been flipped to on-demand and mobile, there are too many options for these leagues to continue delivering their product as they have. They have to adapt. That's the challenge."

Although FC Cincinnati still may be an overall fan-base underdog in a Cincinnati sports culture that has lived many years on baseball and football, attractiveness to younger audiences is one area where the soccer club likely has an edge even before it plays its first MLS game.

Each club has its strong points as the Queen City's new three-team era begins. And instead of thinking, "Let the best team win with the fans," the experts seem to believe they all can win.