With Hildebrandt gone, what will FC Cincy fans come up with to replace 'Mitch Says No'? 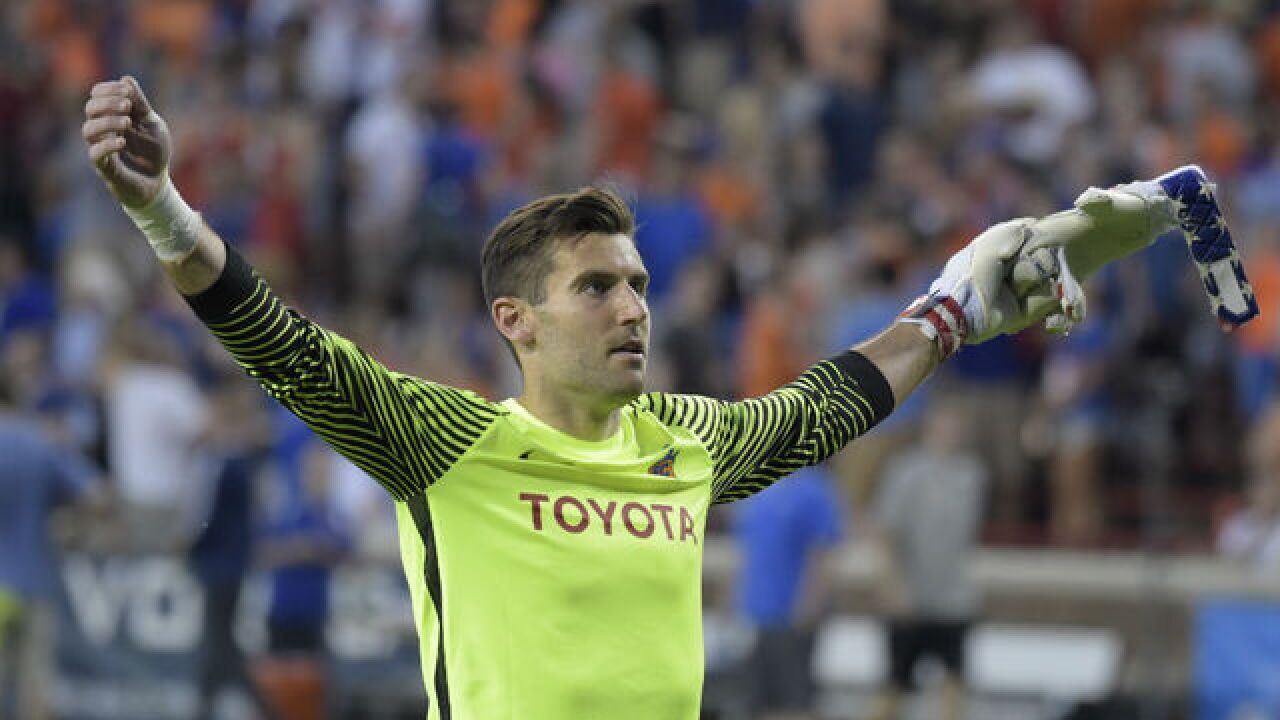 CINCINNATI -- A new guy will be saying "no" to opposing shooters from FC Cincinnati's goal box this season, and the three candidates for the job look forward to seeing how The Bailey responds to it.

Starter Mitch Hildebrandt signed a Major League Soccer contract with Atlanta United during the offseason, and FCC fans who chanted "Mitch Says No" after saves the past two seasons at Nippert Stadium now will need to latch on to a new goalkeeper.

Cincinnati brought in a competitive trio to replace Hildebrandt and his two departed backups. Former Vancouver Whitecaps 2 goalies Spencer Richey and Mark Village and Sacramento starter Evan Newton are all in the mix and could carry the battle for the starting job into the regular season.

"Seeing highlights from games or pictures, it looks like a great atmosphere, and talking to some of the guys, they've just said it's like nothing else in this country," Newton said when asked about his familiarity with the home support.

"I'm excited. Obviously there are a couple places in MLS that have good fan support, and where I'm coming from, we had good support in Sacramento as well, but this is just the next level, I think. I'm excited to get a chance to play in front of it, so it should be fun."

FC Cincinnati coach Alan Koch is hoping his keepers can feed off the home crowds just like Hildebrandt did, as "the Bailey really helped him develop as a player." Hildebrandt now seeks a chance to play in front of some of the most electric crowds in MLS, but will have to do so coming up behind national team goalie Brad Guzan.

Richey, who is on loan from Vancouver, said he was impressed while following FC Cincinnati's U.S. Open Cup run last year as a general fan of the game and former player of Koch. Koch coached Richey with the Whitecaps 2 in 2015 and 2016 and was responsible for selecting him in the third round of the 2015 MLS Super Draft while Koch was also serving as college scout for the Vancouver MLS club.

The 25-year-old University of Washington product didn't have any suggestions for a new chant when he or the others are in goal, but expects The Bailey will come up with something clever organically.

"I actually watched quite a few of their games last year," Richey said. "The Open Cup games were obviously something special. I knew a few guys that were on the team and obviously was familiar with Alan, so it was pretty cool. For a USL club to have that type of following was unbelievable, so people like myself from all over want to tune in and get a taste of it. I'm looking forward to getting an in-person taste as well."

FCC fans might have to come up with three separate slogans to feed some extra energy to the club's goal box this season. It wouldn't be a surprise if at least two keepers see substantial playing time, but Koch insists all three are battling for position. Newton started the preseason opener against MLS side New England Revolution on Tuesday, while Village started the second half of the 1-1 draw that saw plenty of player rotation.

Richey, who earned a 2017 MLS contract after two solid seasons with the Whitecaps 2, and 29-year-old Newton, a 2011 first-round draft pick out of Old Dominion, appear to be the lead candidates. Both had MLS opportunities but couldn't push through to a starting role, including Richey getting just one MLS appearance last year, and each saw Cincinnati as a place to gain valuable minutes with an ambitious club. Newton spent time on the bench with two MLS clubs before trying the USL route beginning in 2014 and served as Sacramento's starter the past two seasons.

Village, a 26-year-old Canadian, also could challenge. Koch referred to him as a late blossomer who might just need the right atmosphere to break through. He didn't come up through professional development like Richey and Newton but joined the Whitecaps 2 for their inaugural season after finishing with Canada's University of Fraser Valley in 2014.

"It's an absolute battle," Koch said. "It's awesome to see. … All three keepers are great guys and great keepers, and it's great to see them under Jack (Stern's) tutelage and see how they are developing and how they are forming their goalkeeper unit, and we're excited to see how they do in these games."

All three keepers said they chose Cincinnati for a competitive environment where they could get decent exposure.

Village signed first but under no impression he would walk in as the guaranteed starter. He said he still would have wanted to join the club had he known two MLS keepers would follow him because he will grow more being around better players.

"Alan kind of said to me, 'We're going to bring in some really good guys,' " Village said. "I'm a little bit of a late developer, and he said he wants me to push for that No. 1 spot, but he said, 'You might not start off at that No. 1 spot. You're going to have to work for it.' I love a challenge so I knew right away I would probably be starting second or third, and I've got to work my way up."

He added, "We're all competing for one job. That's the reality of the business, so we will all relish that and support whoever it is going forward."

All three guys are somewhat familiar with each other from their time in the USL Western Conference, and Richey knew goalkeepers coach Jack Stern from his time with the Montreal Impact.

Stern joined FCC's staff in December after four years with Montreal, including the first-team goalkeepers' coach last year and previously with the club's academy. He spent five seasons in the English Premier League with West Bromwich Albion, where he helped design and implement a technical program that produced England National Team youth goalkeepers each year.

"It's been super awesome," Richey said. "I was joking the other day that this is the most normal foursome, if you count the goalkeeper coach, that I've ever worked with. … It's a fun group. We like to keep things light but also work, so it should be a fun season."

The three keepers are all similar in build and skill set. Newton and Richey are 6-foot-2 and around 190-195 pounds, and Village is 6-foot-1, 185 pounds. All three are good with their feet in addition to being solid with their hands and in shot-stopping ability.

Despite the competition, the trio is helping one another improve and sharing knowledge from past experience.

"We're all meshing well," Newton said. "It seems like we're pushing each other, but also supporting, and hopefully we keep that same energy the whole season. There's only one guy that can play, and obviously we all want to play, so hopefully we can keep a good attitude even if our name isn't called that weekend.

"It's a good group. Who knows what can happen? It's a long season with a lot of games, Cup games, things like that, so there could be opportunity for all of us."