Who replaces Chris Mack? If not Travis Steele, is it Xavier's turn to steal a Porter Moser?

Shoe's on the other foot now 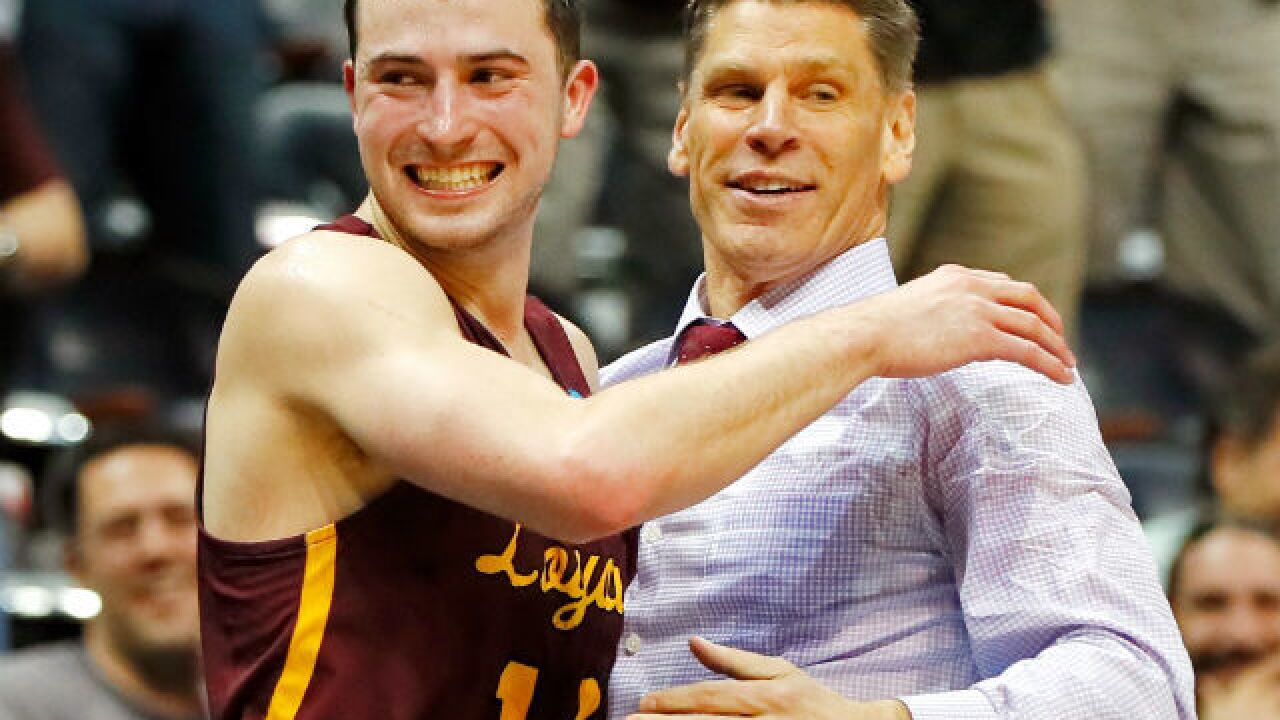 Image copyright 2018 Getty Images. All rights reserved. This material may not be published, broadcast, rewritten, or redistributed.
<p>ATLANTA, GA - MARCH 24: Head coach Porter Moser and Ben Richardson #14 of the Loyola Ramblers celebrate their teams win over the Kansas State Wildcats in the second half during the 2018 NCAA Men's Basketball Tournament South Regional at Philips Arena on March 24, 2018 in Atlanta, Georgia. The Loyola Ramblers defeated the Kansas State Wildcats 78-62. (Photo by Kevin C. Cox/Getty Images)</p>

CINCINNATI -- Before Xavier moves Travis Steele into Chris Mack’s office, will Athletic Director Greg Christopher take a look at the hottest coach in the business, Loyola of Chicago’s Porter Moser?

Xavier fans may get some indication in the next few days if Christopher plans to hire Steele, Mack's long-time assistant, or has eyes on Moser, who has led the Cinderella Ramblers to the Final Four, or another coach outside the program.

Although Christopher said at a Tuesday news conference that he’ll set up a committee and do a national search, he doesn’t need to do that if Steele is his guy, as the national basketball media think. He can name Steele now. But as long as Christopher goes to the Final Four this weekend without naming a coach before then, he’s going to raise speculation about Moser, as well as a pool of other possible candidates.

Maybe now it's time for Xavier to break the tradition of hiring from within.

Maybe now, after Xavier has lost its last six successful coaches to bigger programs, the shoe will be on the other foot.

The national media is all in on Steele, citing Xavier’s tradition of hiring from down the hall. Sports Illustrated’s Andy Staples suggested the 49-year-old Moser for Xavier, but only in passing. Staples wrote:

Another Steele supporter is Mike DeCourcy of the Sporting News, who used to work at the Enquirer  and still has connections to Xavier and UC. DeCourcy is the guy who wrote the article naming Mick Cronin as TSN’s National Coach of the Year.

DeCourcy wrote this about hiring Steele:

“It doesn't need to be complicated at Xavier. It never has been in the past, mostly since the Musketeers have established a past worth considering. This is a program — no, this is a university — that understands how to succeed at this game: the coaching search game.

"This is how it has been done at Xavier for more than three decades, with very little deviation: When the person serving as head coach departs for a more prominent job in the game of college basketball, the person hired is the one who has been preparing all along to keep pushing Xavier toward a position prominent enough to be difficult to ever leave.

"Steele has been Mack's right-hand assistant since he got the job in the spring of 2009: an elite recruiter, an excellent tactician, a coach the players in the program have come to trust. His strength as a recruiter in his hometown of Indianapolis is obvious in the presence of such high-end talents as All-American Trevon Bluiett and freshman Paul Scruggs on the most recent Musketeers roster."

That's fine, but here’s the catch:

What if Christopher has a different way of looking at who he wants in a coach? Or if he wonders if Steele, just 33, is too young for the job?

What if Steele decides he’s not ready and goes to Louisville with Mack?

And here's the big if:

What if that Xavier tradition of hiring from within just isn’t relevant anymore?

Think about it. Mack held this job for nine years. Since he got it, Xavier has moved up in a class from the mom-and-pop Atlantic 10 to a top-tier Big East Conference with prestige and a big TV contract. Xavier raised itself to a No. 1 seed and a No. 3 ranking this season.

You could say Xavier doesn’t have to hire from within anymore. You could see how Xavier could draw interest from coaches who might not have looked nine years ago.

Kentucky’s Kenny Payne, top assistant to John Calipari, could be one of those.

Let’s rule out a few names:

Pat Kelsey, former Xavier player and assistant who coached Winthrop into the NCAA Tournament two years ago, fell out of favor when he agreed to take the UMass job last year and changed his mind. Winthrop went from 26-7 to 19-12 this year.

Miller and Matta? You must joking.

Miller, whose favored Arizona team lost to Xavier in last year’s Sweet 16, is neck deep in the FBI investigation into payoffs for recruits. The FBI reportedly wiretapped Miller offering $100,000 to get a recruit.

Matta had a good run at Ohio State (two Final Four appearances, five Big Ten titles) but acknowledged health problems and was let go after a 17-15 season last year. Matta, only 50 though he looks much older, apparently wants to get back into coaching and was offered the Georgia job this month. But he turned it down, telling ESPN he wasn’t ready to return yet.

Which brings us back to Moser.

Moser is going to be a hot commodity, and Xavier could be at the front of the line to get him. For all times that coaches have used Xavier as a steppingstone, this could be the time the Little School On Victory Parkway That Could gets to make the steal.

So watch what happens if Loyola loses to Michigan Saturday. Moser's agent will be busy scheduling appointments. Christopher should be one of them.

Of course, if Loyola wins the whole thing, Moser’s price is going to go up. Xavier might not be able to afford him.