When Trump talks about infrastructure today in Cincinnati, locals will be hanging on every word

From Brent Spence to locks and dams, lots at stake 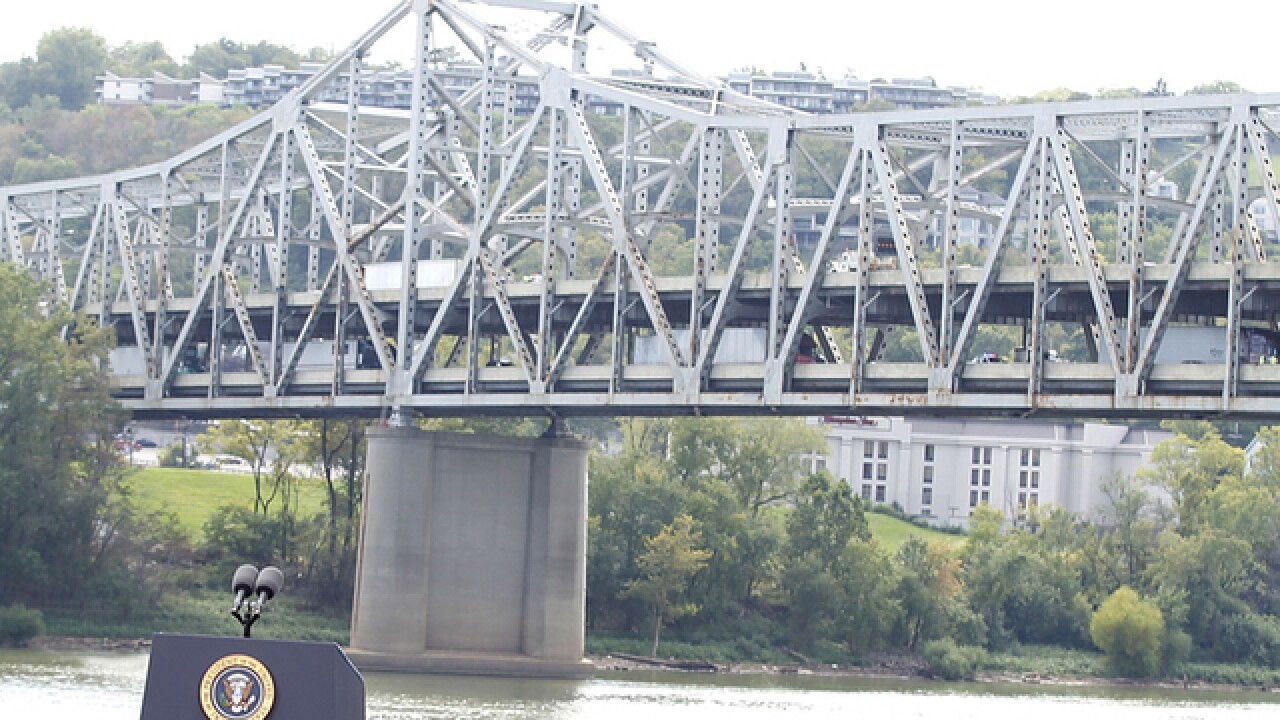 CINCINNATI -- President Trump's visit Wednesday afternoon to Rivertowne Marina will look broadly at the issue of the nation's transportation infrastructure, with a local focus on inland waterways and surface infrastructure.

For most people in Cincinnati and Northern Kentucky, that brings to mind just three words -- Brent Spence Bridge -- and yet there is no assurance the president will even address it.

The 53-year-old span over the Ohio River is one of the most heavily used bridges in the country, and officials at all levels have been grappling with how to handle an upgrade, replacement or companion bridge for at least a decade.

As a candidate, Trump promised $1 trillion to shore up faltering infrastructure, and today, he's expected to explain in more detail how such a plan would be carried out.

Even after the president attempts to clarify a vision for an infrastructure overhaul, the mantra among regional entities appears to be largely "wait and see."

"OKI's priorities remain focused on surface transportation projects, namely the Brent Spence Bridge," said Lorrie Platt, a spokesperson for the Ohio, Kentucky and Indiana Regional Council of Governments. The council has been at the forefront of discussions about the span's fate throughout. "We look forward to what President Trump will say about our nation's waterways. The fact that infrastructure remains a top commitment from his administration is good news for all of us."

Former President Barack Obama used the Brent Spence Bridge itself as a backdrop for his own infrastructure push. That was in September 2011.

The Kentucky Transportation Cabinet, likewise long vested in the fate of the bridge, intends to remain focused on the present day.

"Any time infrastructure is discussed at a federal level, we're very interested, because it impacts the work we do."

OKI Deputy Executive Director Bob Koehler also pointed to the 85-year-old Western Hills Viaduct as one of the worst infrastructure issues in Greater Cincinnati. Plans have been suggested to build a new span just south of the existing bridge at a cost of over $300 million.

"They're not sure where we're going to get all of the construction dollars for the projects. It just makes … it makes for a tough situation but it's got to be addressed,” Koehler said.

Hamilton County Commissioner Todd Portune said the city, county and state are working on funding plans, but he’s concerned about a federal contribution.

"Do we have to do the Western Hills Viaduct all by ourselves?” Portune asked. "I'm going to answer the question by saying this: We shouldn’t."

Perhaps overlooked in the equation here are inland waterways, which mean dams, locks and levees on the Ohio River and its immediate corridor.

Waterways Council Inc. is a Washington, D.C.-based advocacy group that couldn't be happier with Trump's visit if it factors in what the rivers move: more than $229 billion in economic impact via 600 million tons of goods per year. The closest structures to Cincinnati are the Markland Locks and Dam, about an hour southwest, and the Meldahl Dam, about 40 minutes southeast.

"The president has recommended a new 10-year initiative," said Mike Toohey, president and CEO of Waterways Council Inc. "We're very interested in if we could build these projects in the next 10 years, the benefits to the national economy, the reduction in cost to shippers, would allow us to grow our export market and would reduce the cost to the consumer on the domestic transportation side."

Toohey said that $8.7 billion worth of work spanning 24 dam and lock projects is in progress or will be soon. Still, it's not enough to him, in large part because the outlay is intended to stretch over 20-25 years.

"Fifty-seven percent of our locks, out of more than 200, are beyond their design life," he said. "We're seeing more and more unplanned outages resulting from maintenance issues. This has always been identified by our founding fathers as a federal responsibility, and it touches 37 states directly.

"The problem has been, after the '30s and '40s, we stopped investing in a major way in this transportation system. We've underfunded maintenance to the extent that it now goes as a 'fix as it fails' instead of doing strategic maintenance planning and pre-failure work."

The president is scheduled to speak at 1:20 p.m. Wednesday at the marina at 4601 Kellogg Ave. Before that, he'll speak about health care at Lunken Airport, at 12:55 p.m.