Almost more words in its name than ingredients 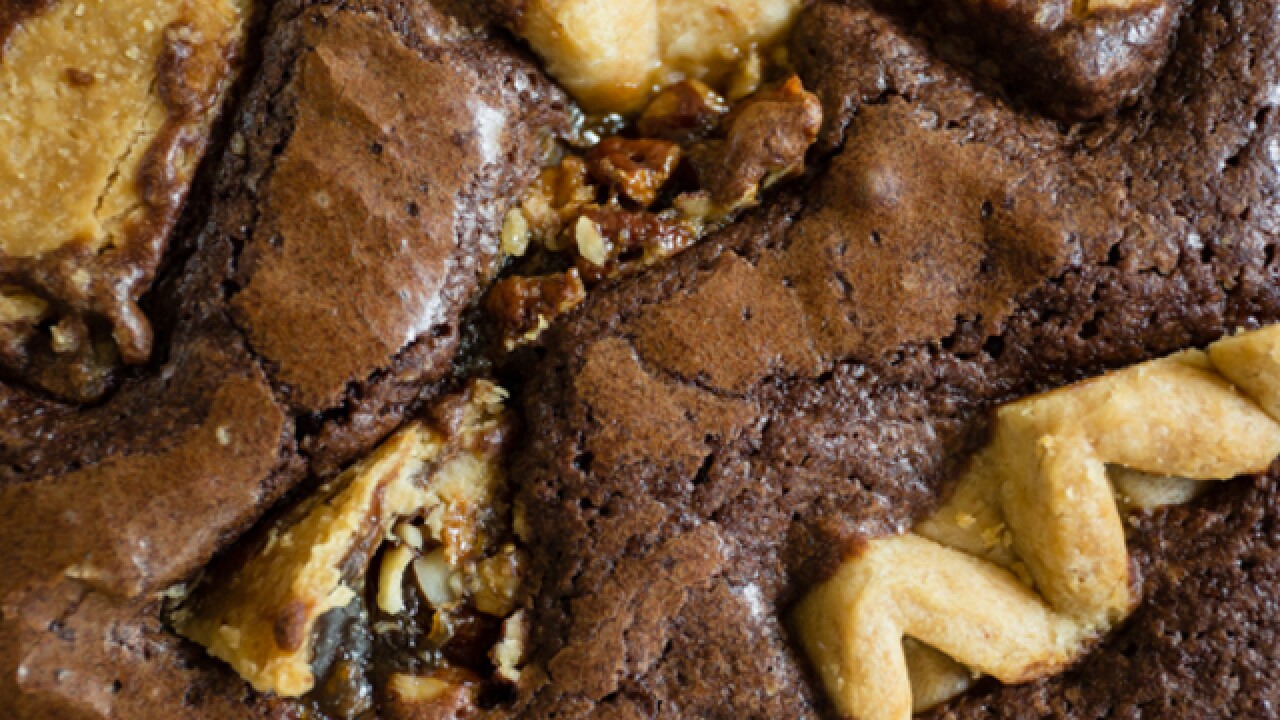 WYOMING, Ohio -- When it comes to decadent dessert, sometimes simple is best.

Take it from Caitlin Steininger, one half of the dynamic duo behind Cooking With Caitlin. Steininger and her sister, Kelly Trush, opened CWC: The Restaurant in Wyoming last year. They credit Cincinnati Enquirer food writer Polly Campbell with the inspiration for their pecan pie brownies.

"I have all these old newspaper clippings of dessert ideas. Back in 2005, Polly suggested the brilliant idea of adding chopped-up pie to brownies," Steininger said.

She debuted the idea at one of her multi-course Third Thursday dinner events several years ago around the Thanksgiving holiday. Then she added the recipe to the Cooking With Caitlin website.

A quick glance reveals a dessert based more on assembly than intensive culinary technique. Steininger starts with a Marie Callender's pecan pie, which is still frozen so it's easier to cut into small pieces. Then she folds the pie bits into a batch of Betty Crocker Dark Chocolate Brownie Mix, prepared according to the package directions. After the brownies are baked and cooled, Steininger serves the slices with homemade whipped cream.

"For the last three to five years, it has been the single biggest driver to our site. It's the most pinned and linked recipe that we have, and that's probably because it's so easy. There are as many words in the title as there are ingredients, I think," she said, laughing.

Steininger and Trush launched Cooking with Caitlin 10 years ago. The two Wyoming residents started as caterers, balancing culinary careers with family life, but the business soon took on a momentum of its own.

"Our elevator speech is that we are food marketers and content creators. Brands hire us to do recipe development or write blogs for them. It quickly became our bread and butter because we could do that during naptime and before our kids got out of school," Steininger said.

The "Cooking with Caitlin Show" has aired Sunday afternoons on 55 KRC for the last nine years. In the meantime, they've managed to pack in a brief Time Warner Cable television show, six years of live Twitter parties, live Fountain Square cooking demos and seven children between the two women and their spouses.

Last year, they added the colorful Wyoming restaurant to their delightfully manic mix with Steininger at the stove and Trush, an ebullient extrovert, gleefully marshaling the front-of-the-house.

Steininger credits her mother with their incredible work ethic and indomitable energy.

"She used to always say, 'Be mercenaries for experience.' Kelly and I say 'yes' to as much as we possibly can and then work backward to figure out exactly how to do it," Steininger said.

Having watched their parents work together over the years selling insurance, the sisters had a "blueprint for success" and learned the value of trusting each other while playing to their individual strengths.

As for the brownie, customers can order it from CWC's dinner menu on Friday and Saturday evening or swing by for a single serving at Wyoming Community Coffee, set to open March 10th.