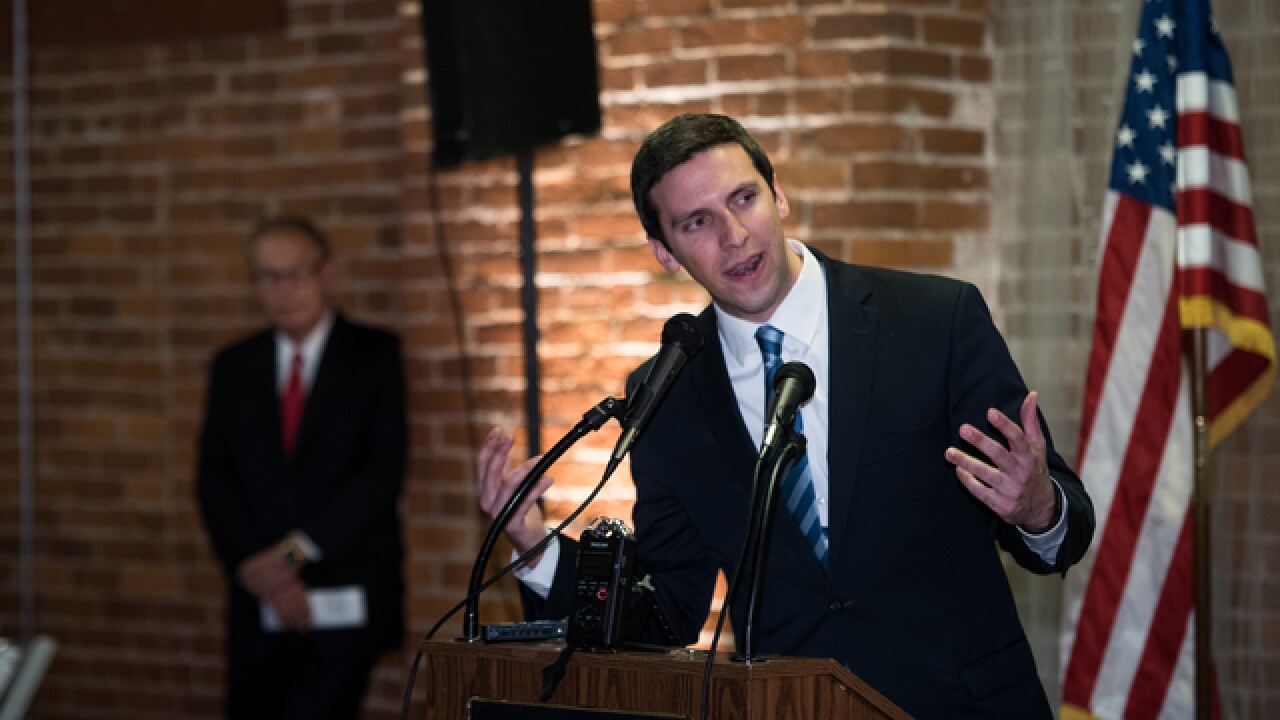 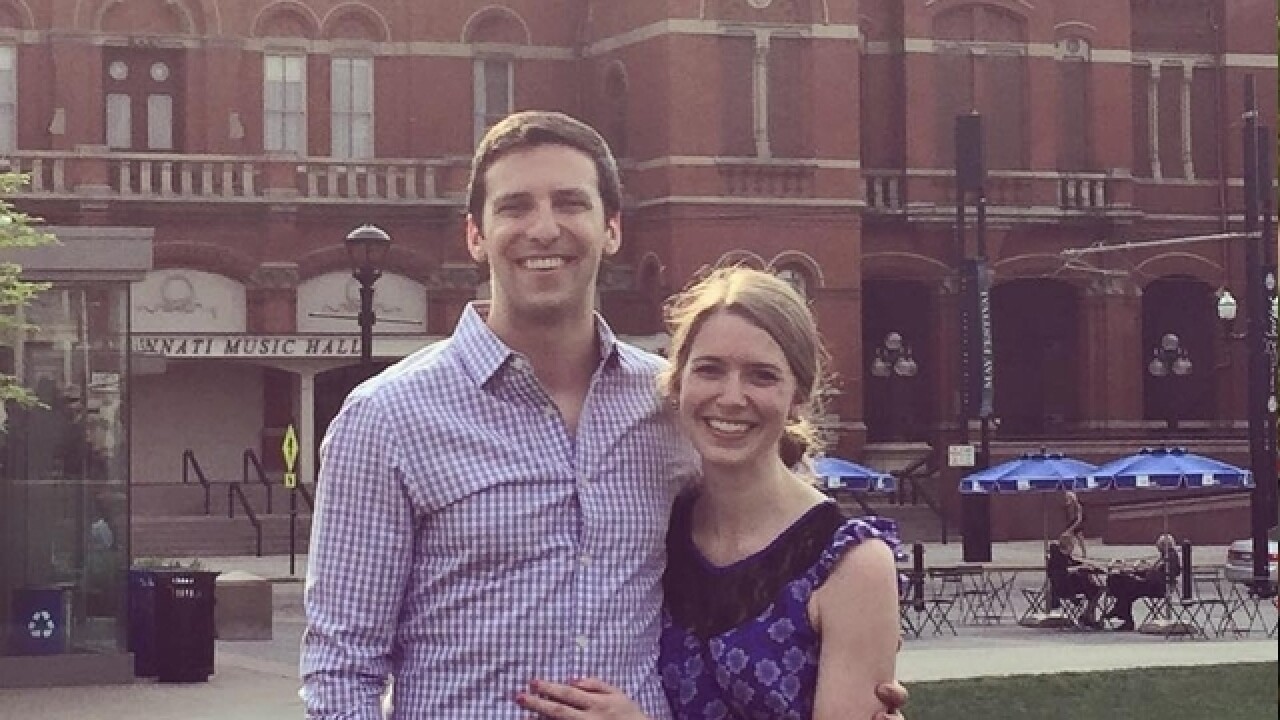 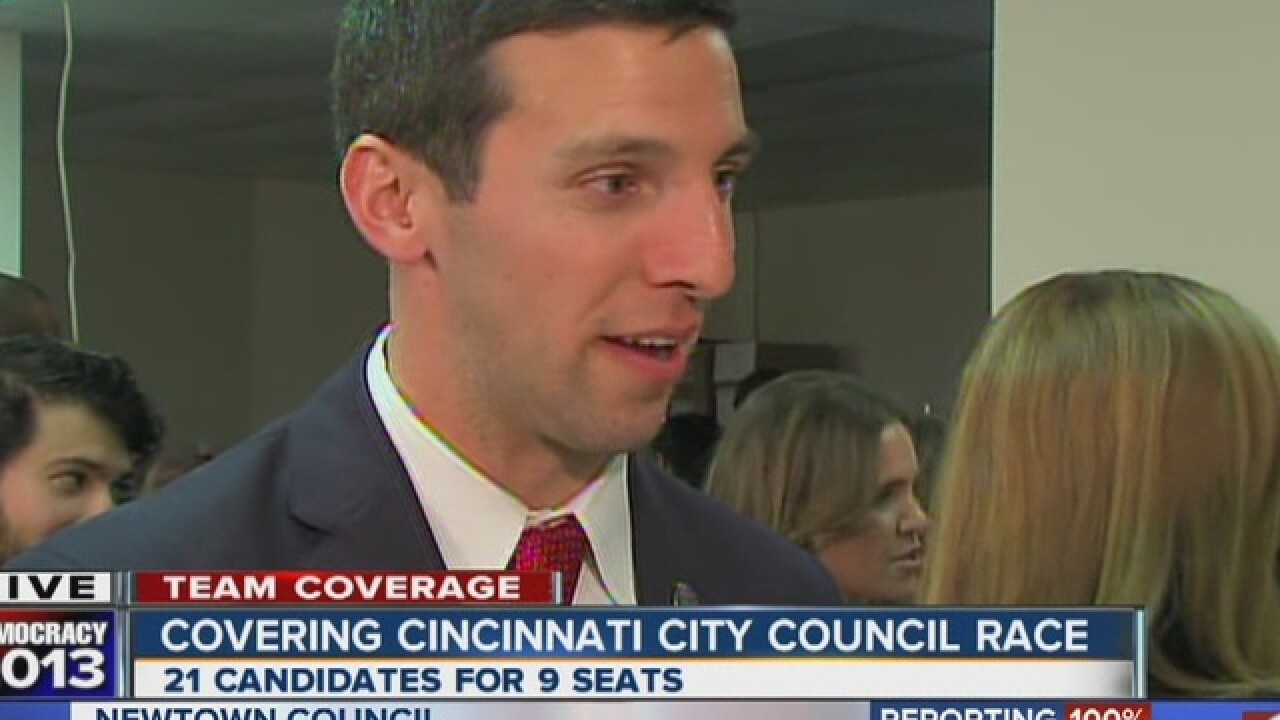 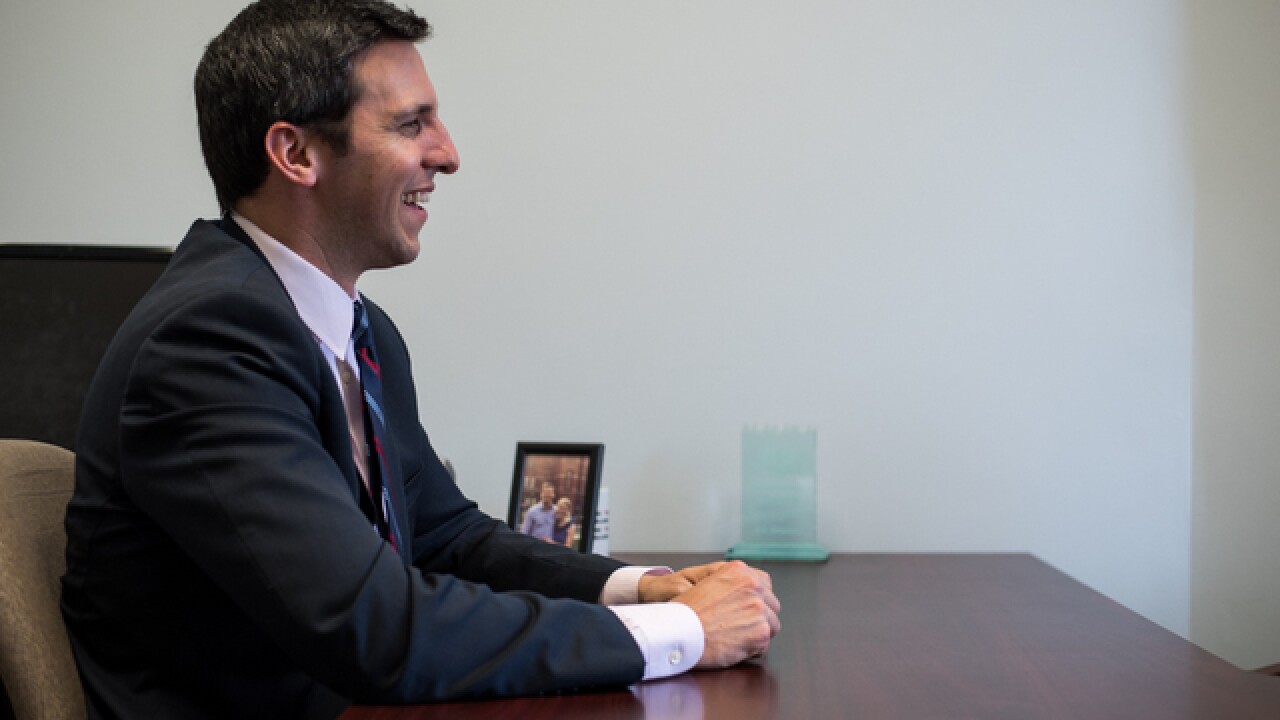 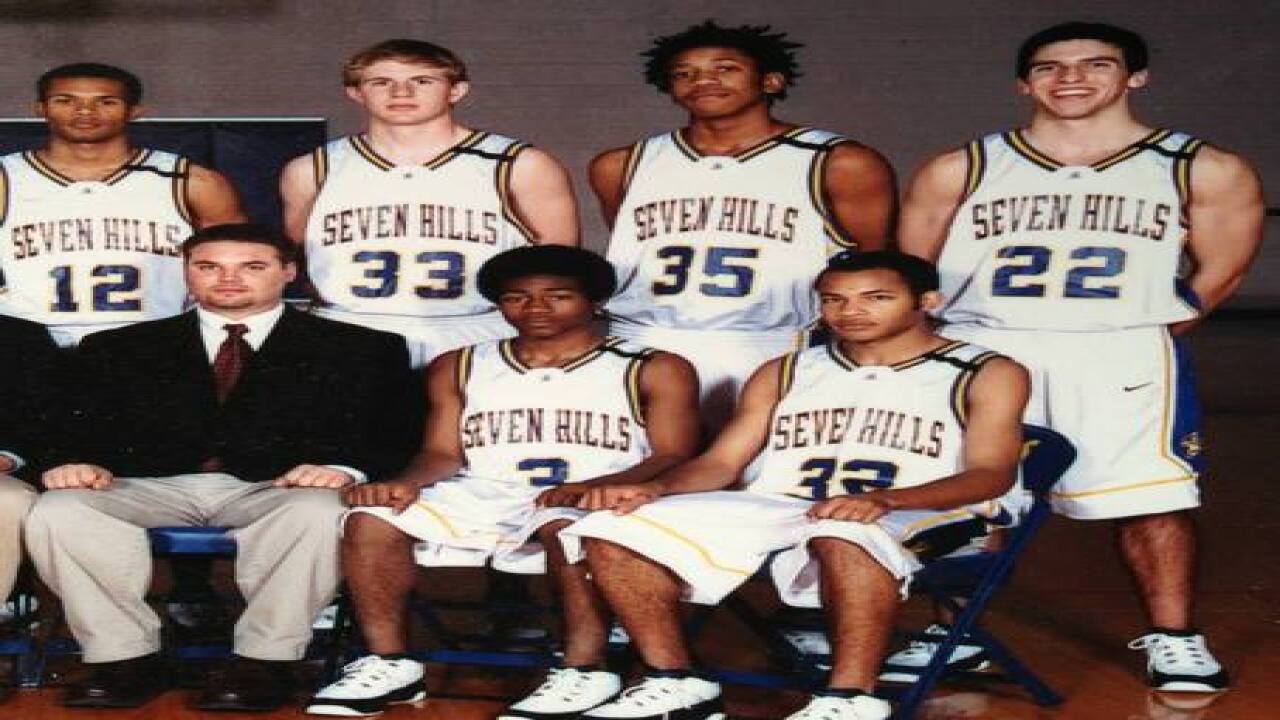 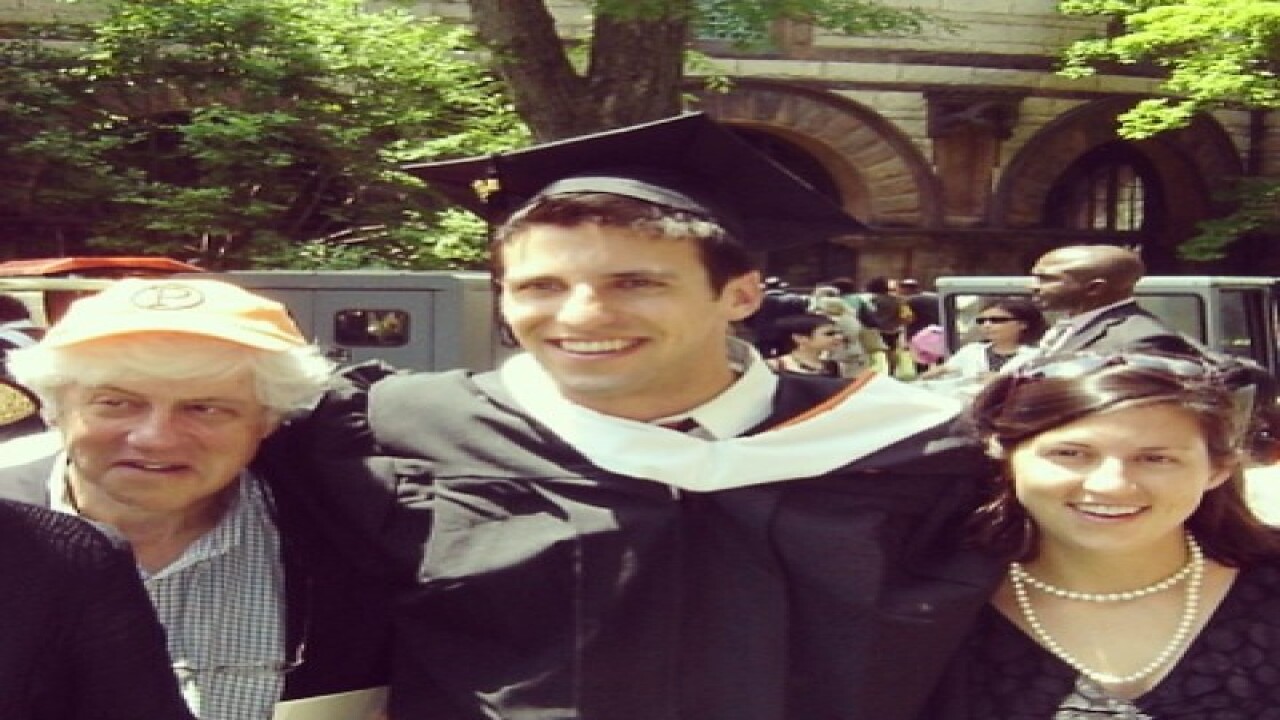 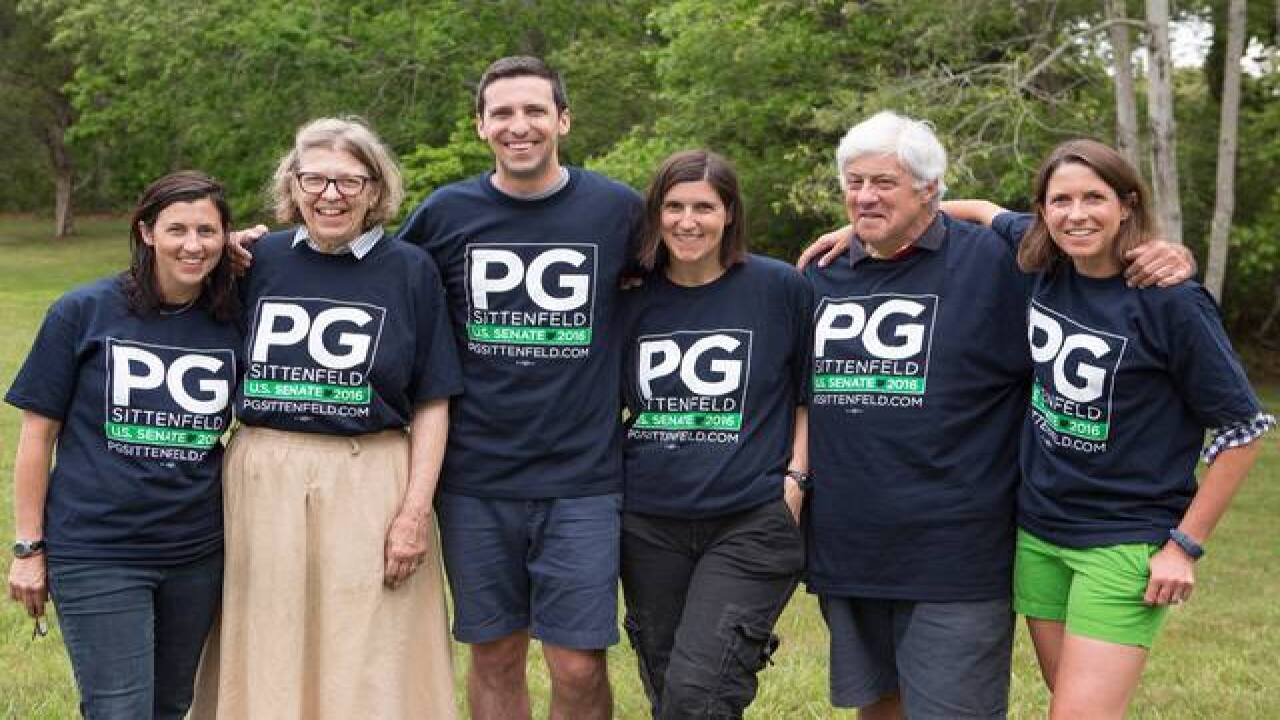 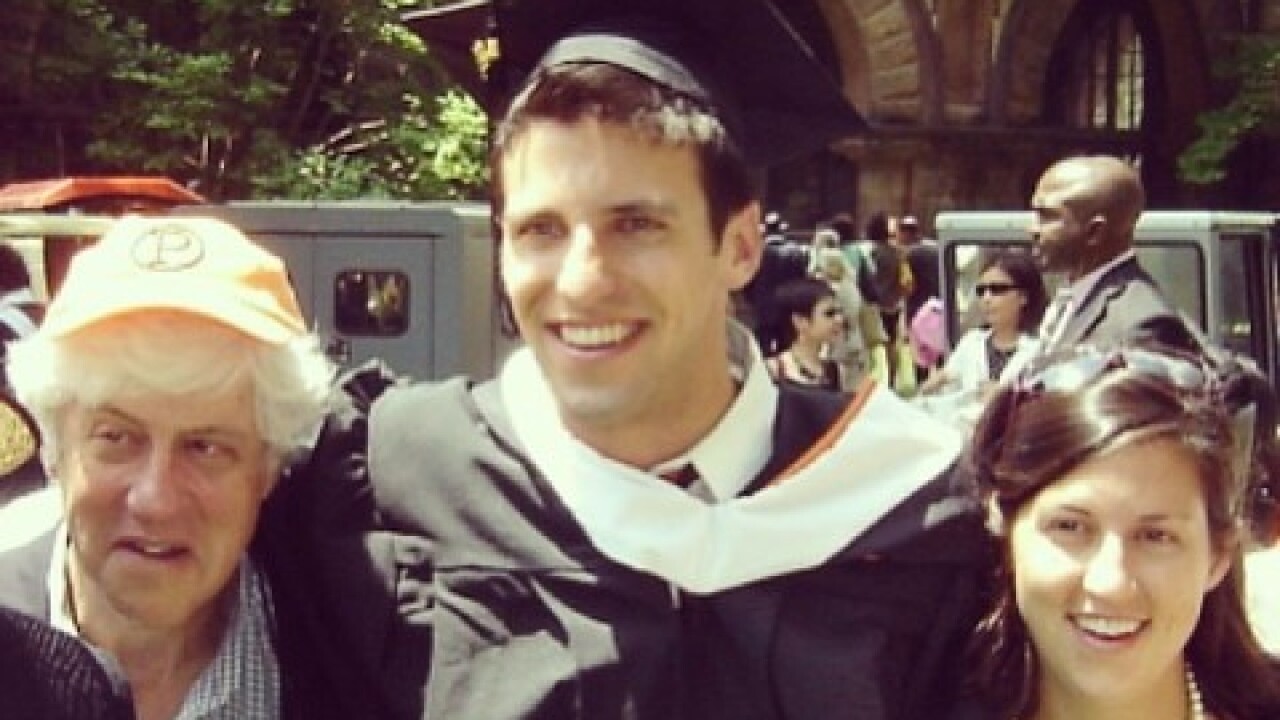 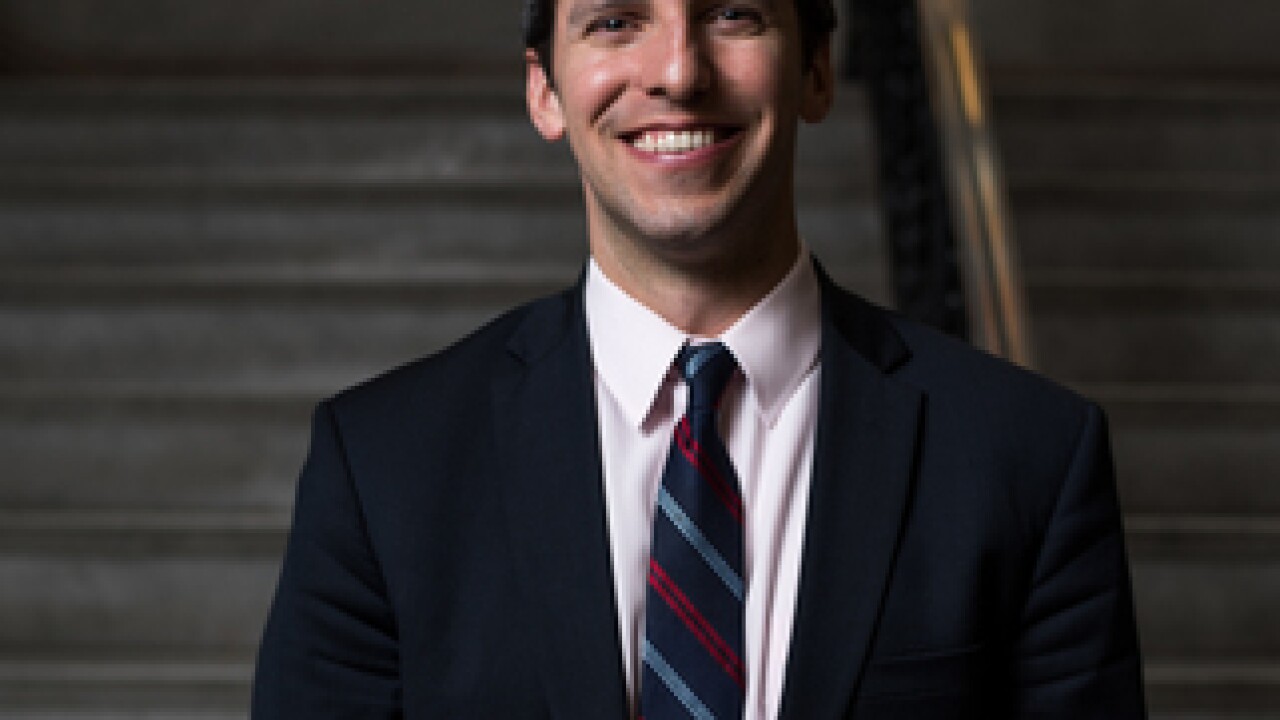 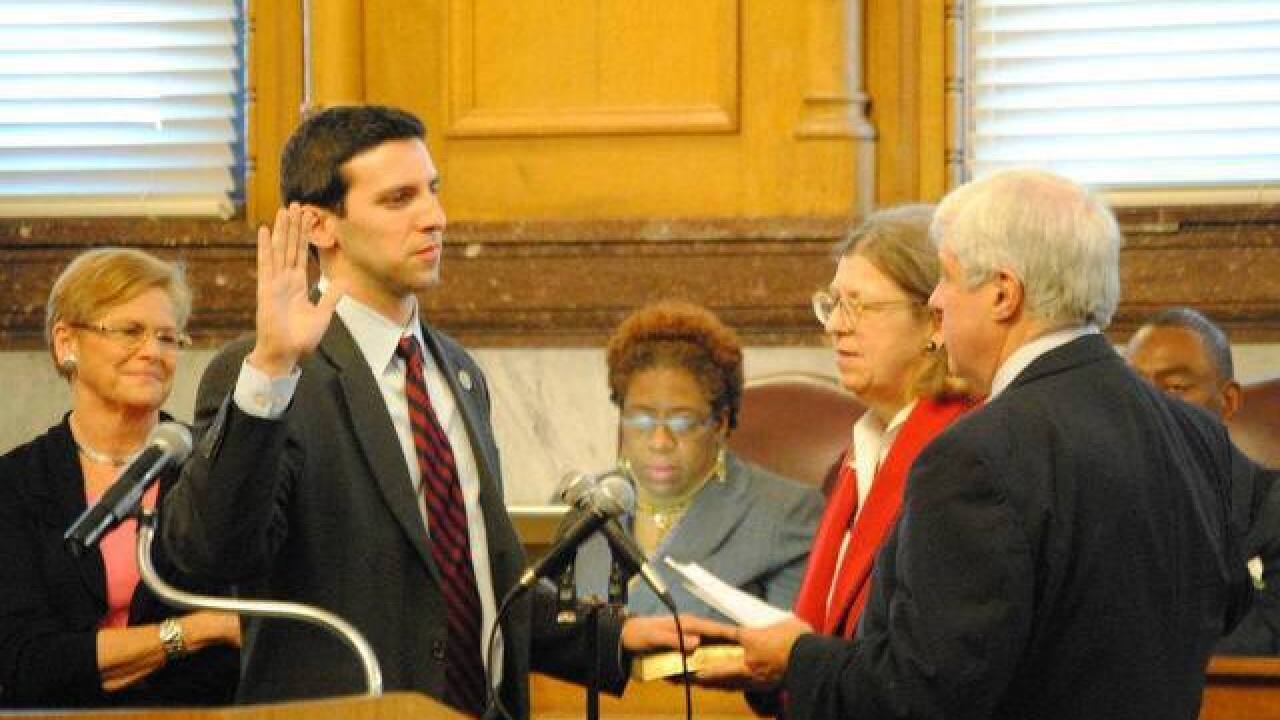 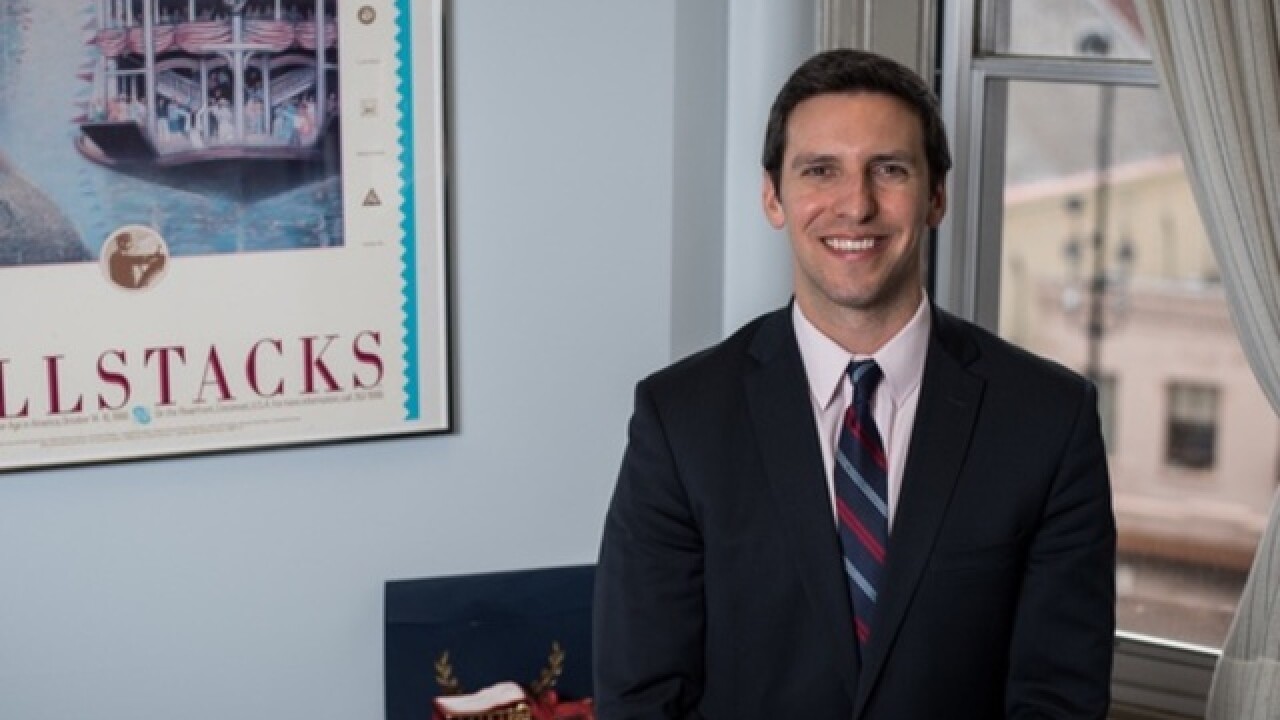 CINCINNATI -- P.G. Sittenfeld is at a crossroads of sorts.

On the verge of getting married this summer. Still digesting the first election defeat of his life. Undecided about seeking a third Cincinnati City Council term. Considering a break from the political spotlight and maybe working for a start-up venture.

"I’m 31 years old. I don’t feel young but I can detach myself enough to recognize that I am," he said. "So my life could take me in a totally different direction for a decade and maybe I could come back and pursue a United States Senate seat in my mid-40s.”

Two months after losing to party giant Ted Strickland in the Democratic primary for U.S. Senate, Sittenfeld sat down with WCPO Insider to talk about the defeat and how he sees his future.

The youngest councilman in city history won his first two races by landslides and emerged as a hero to the millennial generation.

While he seems somewhat humbled by his loss to Strickland in the March primary, his trademark enthusiasm and optimism are still in tact.

“Look, losing is no fun,” Sittenfeld said. “But I understand that it is formative in healthy ways and nobody should go through life just winning.

“I’m sure I will digest lessons learned for a long time,” he said. “But nobody’s identity should be the office they hold or the office they’re pursuing.

“And this was not my last hurrah,” he added.

At age 26, Sittenfeld could have done anything.

A graduate of Princeton University, where he was freshman class president. A Marshall Scholar at Oxford University. A fellowship and then a job offer at Google.

But Sittenfeld decided to come home to Cincinnati.

“He cared about having an impact and giving back. He wanted to go back to Cincinnati where we all grew up,” said his sister, Tiernan Sittenfeld, who is national vice president of the League of Conservation Voters.

Once home, Sittenfeld co-founded the Community Learning Institute, which takes school buildings and turns them into round-the-clock neighborhood hubs.

Then he decided to make a difference on a much bigger scale. He set out to do something no one at his age had ever done before: win a seat at City Hall.

“For me and for my husband, we always look for candidates that we love,” said Jennie Berliant, who is the daughter of prominent Cincinnati philanthropists Lois and Richard Rosenthal. She and her husband, Allan Berliant, CEO of Best Express Foods, have supported Sittenfeld from his first council race through his Senate bid.

“For P.G., there was something about him that we trusted,” she said. “He didn’t come across as being as slick.”

During that first campaign, Sittenfeld stood at street corners around the city during rush hour, waving at voters.

“I did so many honk-and-waves that I got elbow tendonitis,” Sittenfeld said. “I waved at traffic two hours a day …  I would do it in the rain. I wanted people to see me on their drive into work, and on their drive home, and say, 'There’s my councilman.'”

Christie Bryant Kuhns was so impressed with Sittenfeld’s tireless campaign strategy that she copied it when she later ran for the District 32 statehouse seat in 2014.

“P.G. didn’t have this success by accident; he literally went to every corner of the city and talked to everybody,” Kuhns said. “He showed up for everything, and I mean everything. Whether it was a community block event where 10 or 15 people showed up or Zoofari in a room where you could barely move with a thousand.”

And it paid off. Sittenfeld got the second highest number of votes of 23 candidates, and he beat political veterans in that 2011 election.

“That was a moment of shock and joy,” said Sittenfeld, who cried when the early voting totals came in.

In 2013, when he ran for re-election to City Council with the same hardworking campaign, Sittenfeld was the top vote getter by the largest margin in city history.

“Twice in my career I finished first, but I didn’t have anywhere near a margin like his,” said Vice Mayor David Mann, who has been in public service longer than Sittenfeld has been alive. A former mayor and congressman, and a longtime city councilman, Sittenfeld beat him in his own Clifton precinct that year.

In 2013, Mann was the third highest vote getter - but still 11,000 votes behind first-place Sittenfeld.

“His potential is limitless," Mann said.

An Inspiration to Millennials

As a kid, Sittenfeld didn’t memorize presidents or study politics.

He wanted to be a professional basketball player, and called radio sports shows so often that announcers knew him by name.

But he grew up in a house with three older sisters where public service was encouraged. His father was an investment advisor who worked with the Fine Arts Fund and sat on many boards. His mother taught art history and was a librarian.

“There’s plenty in my DNA that would have steered me to this path,” he said.

So it isn’t surprising that Sittenfeld has emerged as something of a celebrity among other millennials.

“What P.G. inspires is the attitude that millennials need not wait their turn to lead,” said Cincinnati attorney Paul DeMarco, a friend and informal advisor to Sittenfeld.

Sittenfeld often gets random calls and emails from young people looking for advice on how to break into politics. He recently appeared on a millennial podcast.

Yet many Democrats were unsure if Sittenfeld followed his own advice when he decided to run for U.S. Senate at the age of 31.

When Sittenfeld announced his candidacy in January 2015, it was an empty Democratic field. But then party favorite Strickland jumped into the race a month later.

The Ohio Democratic Party immediately pressured Sittenfeld to drop out, and gave an embarrassingly early endorsement to Strickland in April.

But Sittenfeld would not quit. In speech after speech, he insisted that millennials should not have to "wait their turns" to lead, and that his generation deserved a seat at the political table.

“Imagine it’s your first major race and everybody you revered in your own party, for your entire adult life, comes out against you,” Demarco said.

“And he kept a smile on his face,” DeMarco said. “He got so good by the end of the campaign that a lot of people wondered, ‘Why aren’t more people paying attention to him?’”

They wondered why Sittenfeld continued to run an unwinnable race. And they worried he was burning political capital that would haunt him later.

Strickland had an enormous advantage in name recognition, fundraising and poll numbers. He is a legend in Ohio Democratic politics.

Slowly, Sittenfeld said he began to realize that door knocks and honk-and-waves could not win an election in a state of 11.6 million people.

“For a Democrat it’s really hard to get traction statewide because nobody has ever heard of you,” Mann said. “I heard a lot people say he’s really hurt himself, he’s hurting Ted and really shouldn’t stay in.”

Through it all, Sittenfeld remained eternally optimistic.

He challenged Strickland on his gun record, pushed hard for debates (but never got one), and drove thousands of miles trying to introduce himself to Ohioans who had never heard of him.

“I never stopped understanding that the wind was in our face, and not at our back,” Sittenfeld admitted.

“I believed at the election that we could win. That doesn’t mean that I know we will win, or I bet we will win, but we could win,” he said. “And then when early returns came back, it burst that bubble quickly.”

The margin of loss was stunning – Strickland got nearly three times more statewide votes, and even beat him in Hamilton County by 10 percent.

But Sittenfeld’s friends think the loss may actually be a good for him.

“I think its good to lose something badly … it just makes you stronger,” Berliant said. “Especially P.G. because, well P.G. has always won.”

What’s Ahead For the Future?

Now as Sittenfeld is on the verge of getting married this summer to his fiancée, Sarah Coyne, he’s deciding what’s next.

He’s holding off making a decision about running for another City Council term until after the November election.

“My brain is just focused on getting married, on being a good council member,” he said.

The loss has refocused Sittenfeld on what matter's most: friends and family.  He adopted a new puppy, Oakley. He launched a podcast, "Keepin' It P.G.," and his first guests were Councilman Chris Seelbach and his sister and author, Curtis Sittenfeld.

“I do think family is really important. It’s a foundation to stand on when things that are fleeting don’t go your way," he said.

Yet many have already approached Sittenfeld about running for one of the many statewide offices up for election.

Ohio's lieutenant governor, attorney general, auditor, secretary of state and treasurer must leave their offices in 2018 due to term limits.

“These are important offices. The functions they play are not always considered the most glamorous, but having good people in those places is important,” Sittenfeld said. “I’ve already had high-profile people in the state and in the political machinery approach me and say, ‘Do you have your eye on this?’ and ‘Would you consider that?’”

Mann believes the connections Sittenfeld made during his failed Senate bid will help him in future runs.

“The next time around … party leaders will be interested in who can win,” Mann said. “I think this will pass quickly and I argue that he helped himself more than he hurt himself.”

Sittenfeld also says there will be a chapter of his life outside of public service, likely working for a startup company or entrepreneurial venture.

“I haven’t yet had the idea that’s made me say ‘I’m going all in on this,’” he said. “Same as a campaign. I would only want to personally go all in, and ask others to go all in, if I said this is the next big thing.”

But as chair of council’s education and entrepreneurship committee, Sittenfeld has plenty of opportunity to meet the city’s best startup minds.

“You never know how one experience is going to lead you to the next thing," he said. "Where I think I can be useful and make an impact, I won’t be bashful about pursuing it.”

Whatever he decides, Demarco is betting on Sittenfeld’s success.

“I don’t think he’s really hit any kind of a ceiling,” Demarco said. “In the end, we’ll all be proud of where he got his start.”

That’s why Berliant has saved every campaign button and note that Sittenfeld has ever written to her family.

“I might be giving them to a presidential library someday,” Berliant said.