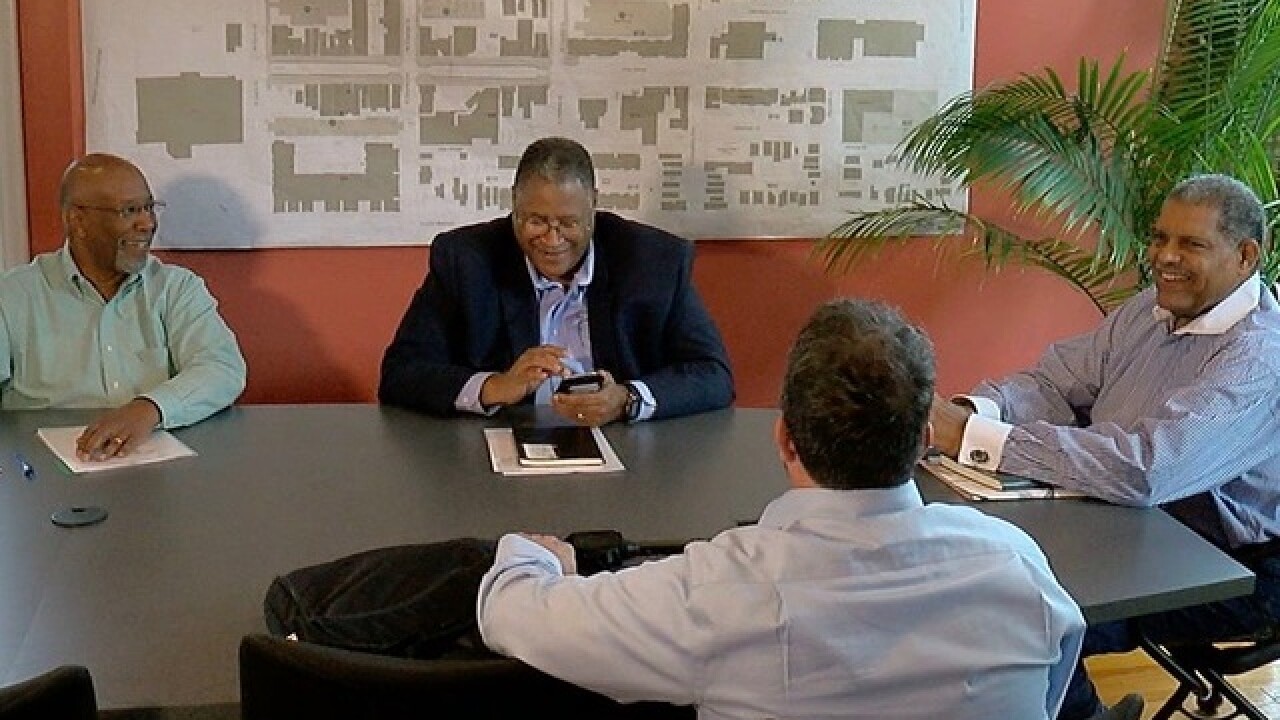 Copyright 2017 Scripps Media, Inc. All rights reserved. This material may not be published, broadcast, rewritten, or redistributed.
<p>Henry Brown, Howard Elliott and William (Bill) Whitten -- who's in the hot seat -- lead WEB Ventures, a consultancy designed to make sure that African Americans, other minorities and women are hired in big numbers for projects in Cincinnati's Uptown neighborhoods. </p>

CINCINNATI -- For hundreds of Tri-State African-Americans, other minorities and women, the road to getting a job building or working in the massive Uptown Gateway development in Cincinnati’s Avondale neighborhood runs through “the hot seat.”

The unremarkable swivel chair sits at the end of a boardroom table in an old brick building on Short Vine in Corryville. There, three former Procter & Gamble executives who make up consulting firm WEB Ventures listen to applicants' dreams and try to assess if they’re ready to launch a new career, need some help to qualify or aren’t a good fit.

“Everybody who we are vouching for has sat in that chair down there,” Henry Brown, a WEB Ventures partner who built chemical plants around the world for P&G, said. “Where there’s a mismatch, then the conversation turns to in order for you to do this kind of work, you’re going to have to do these things.”

Brown or his colleagues accompany the people to interviews whom they think are ready for construction, surveying, landscaping or any other jobs related to the project.

WEB Ventures is in the vanguard of a multi-year effort to ensure that the huge hotel, office and retail project that will sprawl over 450,000 square feet on the corner of Reading and Martin Luther King Jr. will do more than enrich investors and tenants.

Uptown Consortium and its partners moved beyond lip service to make sure women and minorities helped build and staff the complex.

“We’ve been very intentional about laying a framework around that,” Uptown President and CEO Beth Robinson said.

Companies who just want to check the boxes of minority inclusion that are pressed upon them from the outside can find ways to demonstrate they made their “best effort” without actually hiring many women or black, Latino or Asian people.

“Best effort used to be I looked out the window and I didn’t see anybody. But if you’re on the 17th floor of the PNC building, you’re not going to find many minorities and women,” said William “Bill” Whitten, a WEB Ventures partner and former P&G field sales executive.

To prevent that, Uptown pressed the Gateway developer, Terrex Development and Construction, to commit to 25 percent women and minority hiring.

Peter Horton, a Terrex principal and owner, said the approach was a paradigm shift for him and his colleagues.

“It’s really easy in the development world to go back to your tried and true, tested partners,” Horton said. “They’re big shops that you know what they’re capable of. It’s uncharted to know what to expect from smaller shops.”

But Terrex is committed to working with WEB and Uptown to find ways to bring quality contractors into the project who happen to be owned by minorities or women -- or both.

One way is to break up responsibilities among more contractors instead of relying on a few giants, he said.

“A lot of people look at minority inclusion as a way to check a box,” Horton said. “They just need to hit that number and move on. But if you really think about what the impact of the development could be to the community and how you can change lives, it’s just an awesome way to consider the impact of a real estate development.”

Avondale Community Council President Patricia Milton held nothing back last month opposing Cincinnati Children’s Hospital expanding onto a block of homes, calling it “kingdom building” that contributed to the destruction of a black neighborhood.

But Milton had only good things to say about the inclusion effort with the Gateway project and how it will benefit that same black neighborhood.

“A lot of intentional effort is going forth,” Milton told WCPO. “Uptown Consortium has made the commitment. They do think a little differently on how they identify inclusion.”

Her support is music to the ears of business and neighborhood leaders who are making an extraordinary effort to include residents of Avondale and other Uptown neighborhoods in every phase of the project, from planning to construction to decades of maintenance.

“We feel it’s going to be a wide variety of jobs, all the way up from entry-level jobs to surely Ph.D.s and highly trained technicians,” Robinson said. “It’s not easy work. We’re realizing it's going to require some heavy lifting thinking forward. For us that’s the key.”

Adding competition to the tried and true suppliers, he argued, often creates pressure to lower costs and introduces innovations that lead to new efficiencies.

“The surprise is when employers say, 'you mean that there are diverse businesses out there who are as good as and even better than who they’ve worked with?'” Elliiott said.

Terrex will ask all of its tenants to go through an inclusion workshop, whether they’re small businesses or multinational giants.

And WEB Ventures plans to hold everybody accountable. If they bring a vetted, qualified contractor or worker to an employer, they expect the employer to give them a fair look.

“We make sure contractors aren’t playing with people,” Brown said.

The group has Mike Brandy excited. He’s president of Brandicorp, which has signed on to develop a hotel at Gateway.

“We are passionate about staffing from the community as it is great for our business and hopefully good for the community. We have had great success in previous projects but have not had the opportunity to engage with local professionals to increase our results with staffing locally. We are very excited about the opportunity,” he said.