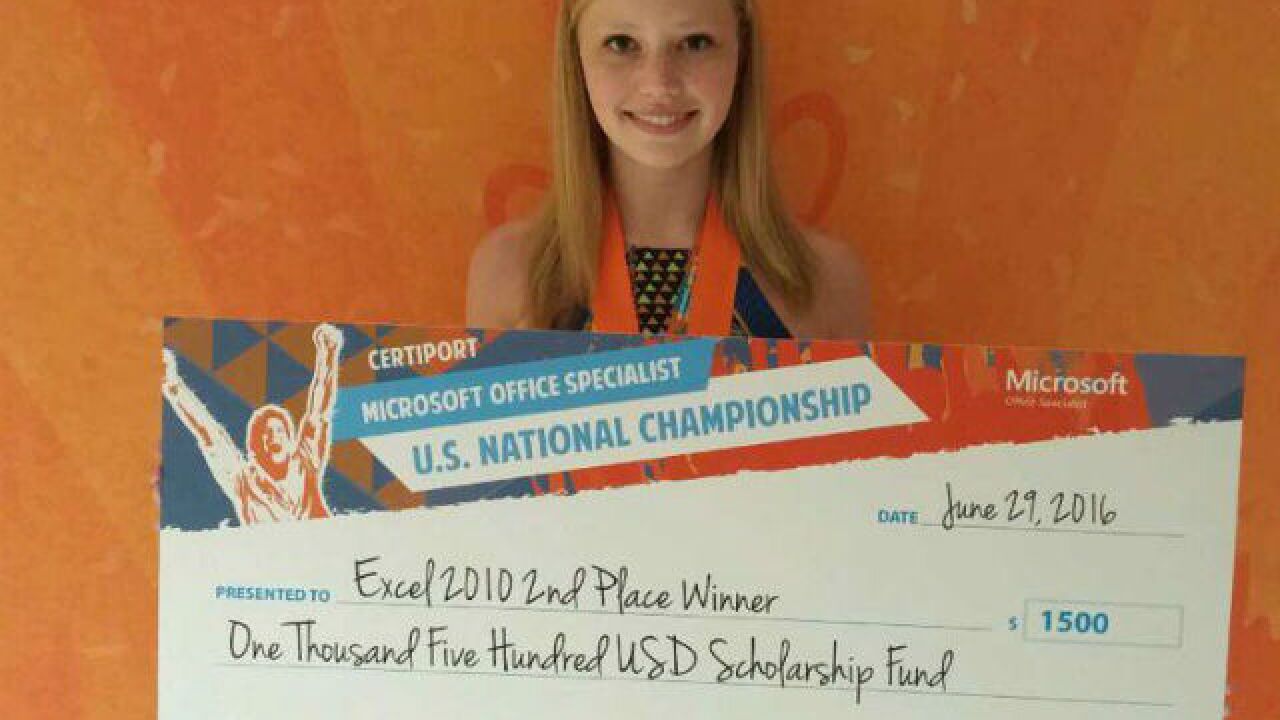 WALTON, Ky. — Most high school exams don’t lead to a national championship, trip to Orlando and $1,500 prize, but for one recent Walton-Verona High School graduate, that’s exactly what happened this summer.
After receiving a top score on the Microsoft Office Specialist Excel exam during her senior year, Erica Sandlin was invited to represent Kentucky late last month at the Microsoft Office Specialist U.S. National Championship in Orlando. The aspiring accountant brought home a second-place medal in the Excel 2010 category and the accompanying $1,500 scholarship prize.
Erica, 18, who was this year’s salutatorian at Walton-Verona, has a lot to be proud of as she heads off to college next month at Western Kentucky University: She’s part of the elite group of winners who topped more than 300,000 total entrants and 108 finalists from across the nation. And while the small, independent school district in Boone County is celebrating her accomplishment this summer, two of its teachers are beaming.
You see, education is a family affair in the Sandlin family. The national winner is the daughter of Walton-Verona fourth-grade teacher Tonya Sandlin and high school business teacher David Sandlin.
“We’re thrilled,” David Sandlin said of his daughter’s performance at the national championship. “As a parent, you love to see your child succeed at something she loves to do; and as an educator, it’s exciting to watch her apply the knowledge she’s learned in the classroom.”
For Erica, the second-place finish in Excel is especially exciting, she said. In accounting, Microsoft Excel remains an integral tool of the trade.
“It’s definitely a needed skill for my major,” she said.
Erica’s knack for accounting comes naturally. Her dad teaches accounting, financial literacy and business management. He was a stockbroker before becoming a teacher.
“I’ve always loved math,” Erica said. “Part of that comes from my dad. Financial literacy, budgeting and planning are big in our house… Accounting is a natural fit for me, and I see it as a way to help people.”
Erica also credits the school district for her success at the national competition. During a time when budget cuts are forcing schools to make tough decisions about non-core courses, such as business and economics, Walton-Verona Independent Schools makes them a priority. Students must take a course in financial literacy or economics in order to graduate, she said.
During her years at Walton-Verona High School, Erica also served as president of the school’s Future Business Leaders of America chapter, was a member of its LEGO robotics team and its Beta Club, an academic honors society that focuses on community service.
Her dad describes her as a “model student.”
“She has a tremendous work ethic, and she’s competitive,” he said of his daughter. “She has a really bright future.”
The Microsoft Office Specialist U.S. National Championship event is hosted by Certiport , a provider of certification exam development, delivery and program management services. At the annual championship, qualifying student competitors take an exam in their track, further testing their knowledge of the applications. In conjunction with the event, Certiport hosts an educator conference where teachers who offer certification in their classrooms can share best practices and learn what’s new. Click here for details, and a full list of this year’s national winners.
Copyright 2016 Scripps Media, Inc. All rights reserved. This material may not be published, broadcast, rewritten, or redistributed.