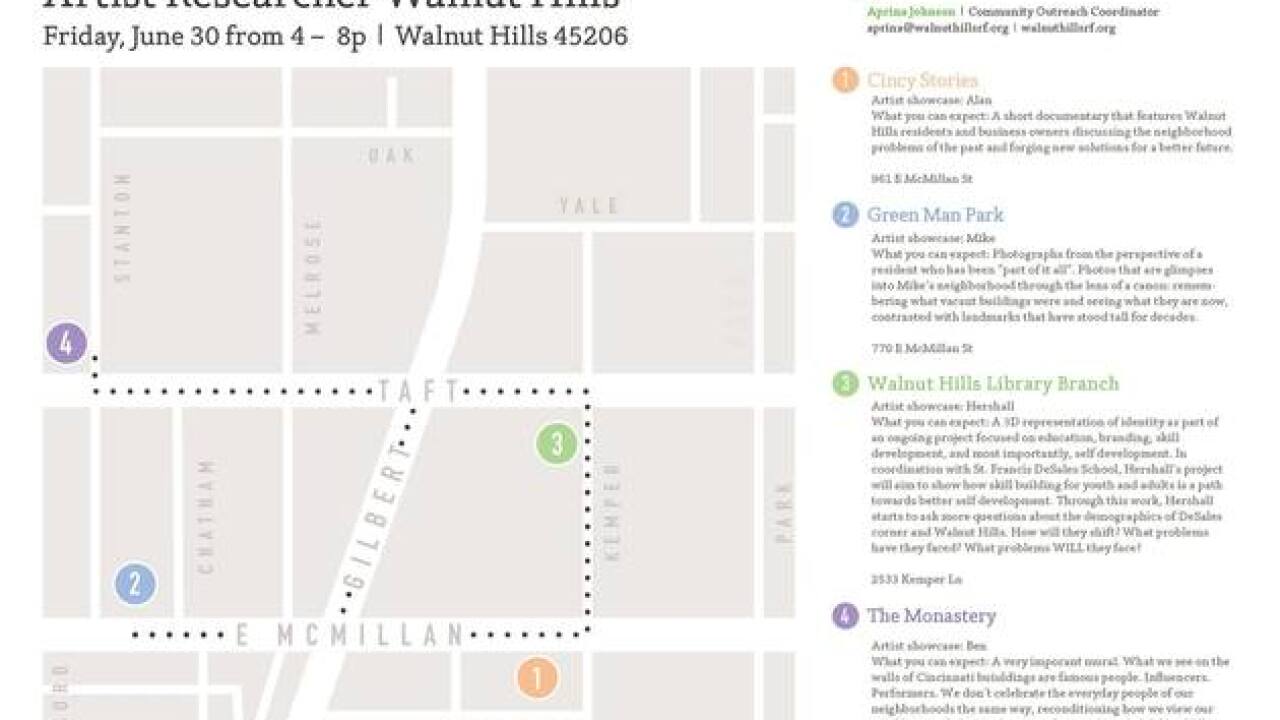 Copyright 2017 Scripps Media, Inc. All rights reserved. This material may not be published, broadcast, rewritten, or redistributed.
Walnut Hills Redevelopment Foundation
<p>This map shows the schedule for the artist researcher exhibit on June 30 in Walnut HIlls.</p> 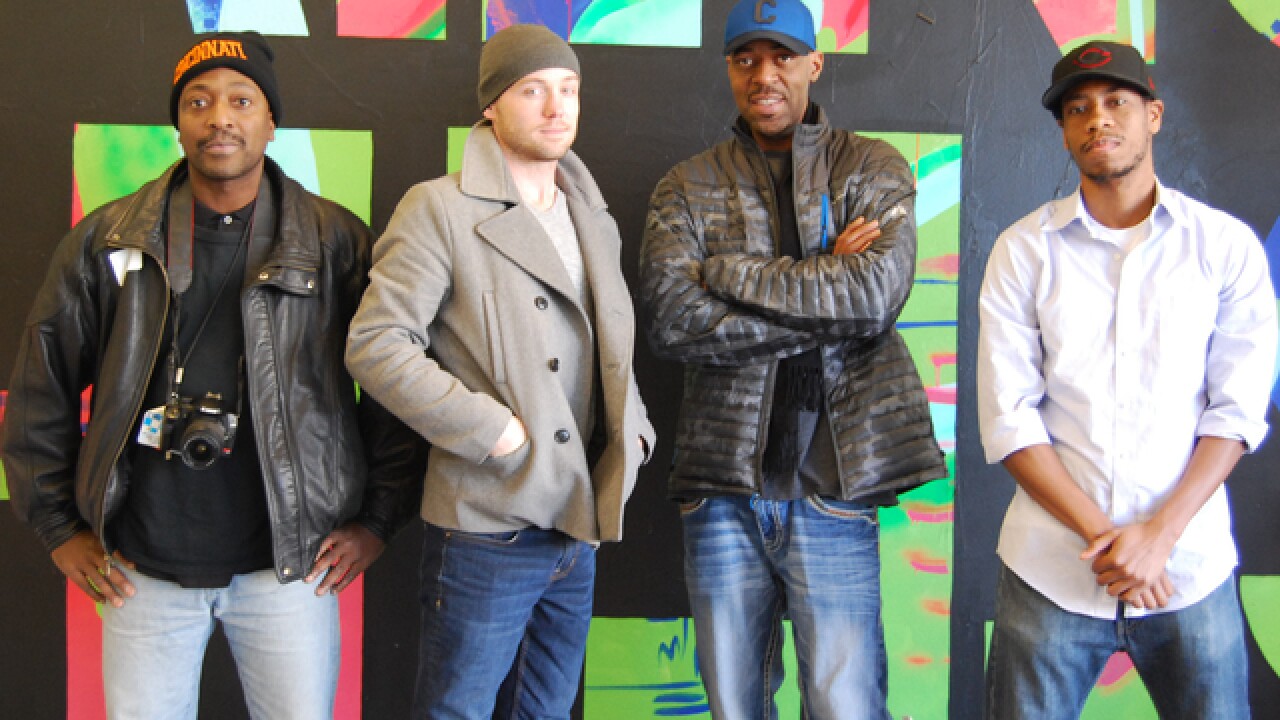 CINCINNATI -- Segregation may have officially ended decades ago, but it still permeates the culture of Walnut Hills, Aprina Johnson says.

“I would talk with one group of people, and they would say, ‘Oh, I don’t go down there on that side of the street,’” said Johnson, who works as the community outreach coordinator for the Walnut Hills Redevelopment Foundation. “And they were hostile about it! And I would say, 'Why is that?' … We have to figure out how to obliterate that wall and bring people together.”

She sees art as the answer to unite a racially and economically divided neighborhood.

Since March, Johnson has been working with four local artists to ask community members how their lives are shaped by limited interaction with people from different backgrounds or inequality in education, housing or entrepreneurship opportunities.

“People were shocked that we were actually having a conversation about it,” Johnson said. “The kids were saying they’d like to see more people around them that look different than them, and that was powerful because when you go to a school that’s predominantly black or Caucasian and nobody asks you that question, you just don’t think about it.”

“All the artists have a personal connection to Walnut Hills, which is really powerful. They’re not just parachuting in with a cool idea and then dipping out,” Aprina Johnson said.

Haley, 36, lived in Walnut Hills off and on as a child before attending Purcell Marian High School and studying audio/visual production at Cincinnati State. He sees why people would view Walnut Hills of the '90s as unsafe with its blighted properties, closed-down stores and graffiti. Longtime residents, Haley said, sometimes internalize that “downtrodden” environment and don’t believe that anything better can come.

The past couple years have seen new restaurants, businesses and initiatives like the Green Man Park and community gardens breathing new life into Walnut Hills that Haley called both rejuvenation and gentrification.

“Whenever you have a transition like that, there are a lot of stories to tell from the people who have lived here for a long time and how they feel about how things are changing and whether they feel like it’s for the better,” Haley said, noting that the people he interviewed for his documentary film don’t want longtime residents to move out.

It took Haley about four or five days locked in a room to distill three hours of interview footage from five community members down into a 25-minute film that crystallizes why Walnut Hills residents should get more involved in their neighborhood's future.

“It’s their home. It’s not a place that they just come and hang out -- it’s their home. They need to take ownership of it and make it the best place it can possibly be,” Haley said. “I really hope to inspire people to become active and join in so they can reap in the benefits because this neighborhood is going to come up. It just is.”

Speaking out is one way to prevent gentrification, Johnson agreed, but she said creating a partnership between residents and developers is even more important.

“(Gentrification) doesn’t happen when leadership and those who have the ability to make these major changes in the community actually get face to face, hand in hand with the members and the longtime residents here,” Aprina Johnson said. “Once the relationship is built, there’s some trust there. There’s some accountability there. And a lot of the time, when development is happening, that’s the missing piece.”

Completed through funding from LISC and ArtsWave, the artist researcher exhibit allots a half-hour to each artist’s work at spots around Walnut Hills, starting with Haley’s film debut at 4 p.m. Friday at the Cincy Stories Gallery.

Ellison will showcase photos comparing what buildings were and what they are now from 4:30 to 5 p.m. at Green Man Park. Herschel Johnson will unveil a 3-D shield he sculpted with students from St. Francis De Sales school from 5 to 5:30 p.m. at the Walnut Hills Library.

From 5:30 to 6 p.m., attendees will get to see Thomas working on his mural at the corner of Lincoln and Gilbert avenues, a formerly booming black business district that Aprina Johnson says they want to celebrate. Instead of famous people splashed up on the walls like so many other local murals, she said this one features ordinary residents, who will also be on scene Friday.

“The people who live on these streets who take up space right here in Walnut Hills are also important. The mural project is putting them up at large, celebrating them through picture and color. Celebrating them as they tell their stories,” Aprina Johnson said. “People ride through Walnut Hills all the time, and we want to change that. We want people to stop here and be intrigued.”

Following a dinner break, the artists will reassemble for a panel discussion at The Monastery recording studio at Taft Road and Stanton Avenue.

“I would absolutely love to see people articulating their ideas in the space that day,” Aprina Johnson said. “I want people to walk away understanding that within your own set of skills, you have the ability to cause people to be intrigued by one another and want to come together.”

Find more information about the event on the Facebook page here.