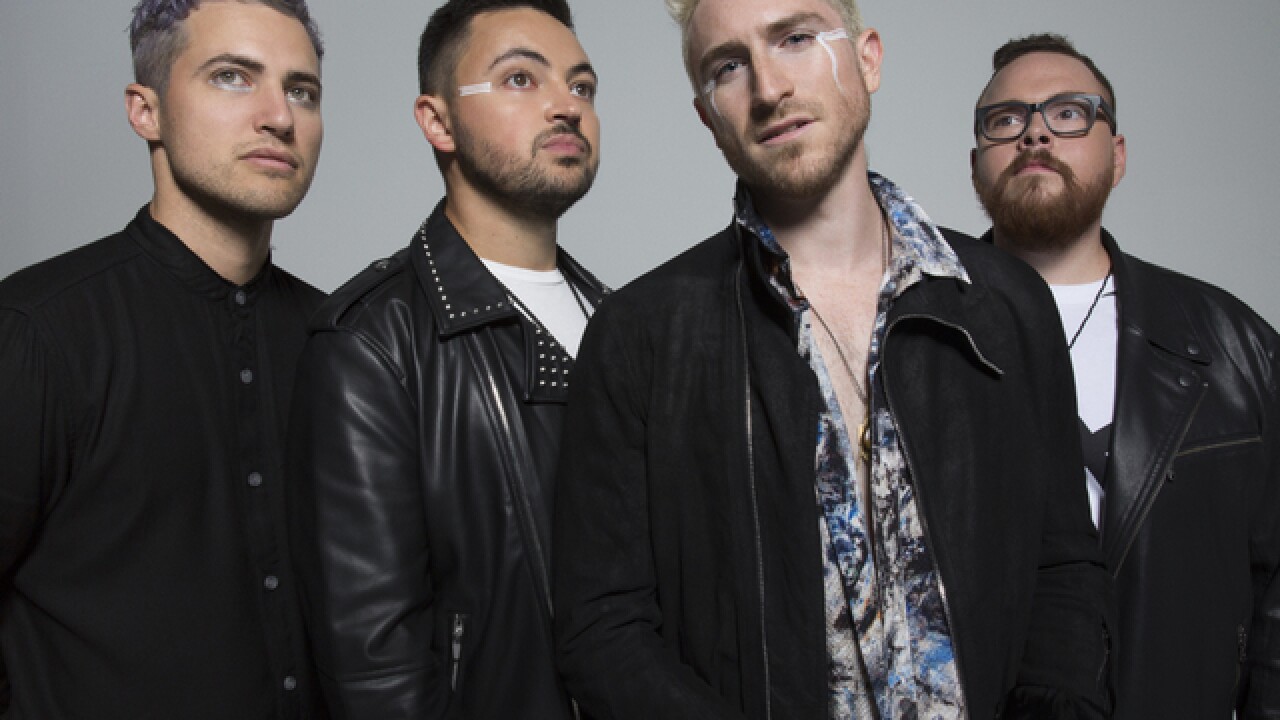 Walk the Moon was on cloud nine.

Back in March 2016, the Cincinnati-bred band was riding high on the biggest hit of its career, the inescapable pop smash "Shut Up and Dance," and rehearsing for what was slated to be its biggest, most elaborate headlining tour to date.

Then, singer Nick Petricca's father fell ill, and suddenly Walk the Moon had to do something it said it never would: disappoint fans by canceling shows.

"Nicholas' dad had been diagnosed with early-onset Alzheimer's and had been dealing with the disease since I met him seven years ago, and the illness was coming to a head," said guitarist Eli Maiman. "It came to the point where Nick couldn't leave his mom and family for two months to go on the road. We had to do something we hoped we'd never have to do … cancel a tour where people had already bought tickets. We already had a big production and we were super excited to get on the road and have the final hurrah on the record cycle that was so huge for us."

Combined with bassist Kevin Ray's career-threatening shoulder injury and some serious burnout from years of hard touring, just as the band was reaching the peak of success, its future was thrown into doubt. But, as Maiman explained, "family comes first."

So the band took some time off to allow Petricca to be with his father, who died in February 2017. Eventually, the group began writing again and Maiman said the unforeseen benefit of the breathing space was that it gave the group -- which also includes drummer Sean Waugaman -- time to step back and assess the rocket ride it had been on for the previous four years since the release of its self-titled debut in 2012.

"When you're on the road and in the routine of touring, you sweep stuff under the rug, and we were able to deal with interpersonal tensions in a big way, and we took that and put it into the record," said Maiman, who noted that there was a time he thought things might not return to normal because of the creative and personal tensions between himself and singer Petricca.

But they figured out their issues and got to work on what would become their bright, triumphant fourth album, 2017's "What If Nothing," which has already spawned the pop radio hit "One Foot" and put the band back into the fast lane.

WCPO spoke with Maiman about Walk the Moon's rebound and deep ties to their beloved hometown.

WCPO: You talked about how things got weird between you and Nick. How long had you known each other at the point where the band went on hiatus, and what effect did all that road work have on your relationship?

Maiman: We've known each other for eight years. It is a lot of time, but Walk the Moon is different from most other bands in that we didn't grow up together or pick up guitars together or have long-standing friendships. I met Nick at a gig, and we instantly had chemistry because he had gone to Kenyon (College) for music school and I had gone to CCM (University of Cincinnati College-Conservatory of Music), so we shared a musical language we could connect on. We forged these relationships on the road, which is trial by fire when you're roommates and small business owners. I don't know exactly how many shows (we played), but we were doing 300 days a year away from home in cramped quarters with each other. It's a lot any way you cut it.

WCPO: What got you back on track? Was there a song or a moment? And has the success of "One Foot" allowed you to take a deep exhale and shake off the sophomore slump worries?

Maiman: We decided to get together in Austin (Texas) in late October 2016 and do a week in a studio, just the four of us writing to see what happens. One of the first songs that came out was one that made the record called "All I Want," where the lyrical content was Nick asking why he isn't happy. He's talking about trying all these things, maybe if he had more money, more sex and found fulfillment in all these ways. It touched on something we were all feeling. Why when we're seeing all these dreams come true, playing on the other side of the world to sold-out crowds … why are things so weird? It set the mood for the record.

(And) for sure. Big exhale. We felt really good about the record. We were more excited about it than anything else we've ever done in our career. But you still never know. If writing hit songs had some kind of formula, everyone would do it. Even if you think you have the most badass hook of all time, you can put it out and it doesn't work. It was a huge sigh of relief. We never set out to do "Shut Up and Dance" again. We continued to write and follow our hearts and do music we're excited about.

WCPO: You've headlined the two biggest rock festivals in town at this point -- Bunbury and MidPoint. Is it important for you guys to play those kinds of hometown events? And what do you see when you look out at the audience during a show like MidPoint?

Maiman: For sure. We love coming home to Cincinnati, and those are some of the most base goals in my heart. One of my earliest goals as a child was "what if we could play MidPoint?"… and now here we are playing MidPoint 20 years later at the Taft and having a great time, and having people continuing to come out and support us is great. I see my parents and my fiancee (when I look out at MidPoint). Literally. I'm trying to make them proud.

WCPO: What's the most Cincinnati thing about the band? Do you carry a bit of Cincinnati with you everywhere you go?

Maiman: It was funny. Seven years ago, when we were taking meetings in New York with labels or management people and just getting started, sometimes people were shocked we were from Ohio. It was almost like they expected us to come in on our horse and buggy. We take a lot of pride in representing Ohio and being kind and considerate and thoughtful and bringing that Midwest charm and still bringing a badass rock show. We are so insistent on telling people we're from Ohio. We always say, "We're Walk the Moon and we're from Ohio." I haven't found a good way to carry around Skyline Chili with me (on the road). There's no good way to prep it on the bus. But it's in our hearts.

WCPO: Do you remember the first show you ever saw in town?

Maiman: My first show I ever saw was "Weird" Al (Yankovic) at the Taft when I was 9 or 10 years old in 1995. My parents took me to that show and it was amazing. There were costumes, it was theater and rock 'n' roll. That made coming back to play the Taft even more special.

WCPO: It's an old story at this point, but talk about the origin of the makeup and how it became a thing for your fans. Are you surprised it has become such a signature of your shows?

Maiman: It was not on purpose and absolutely (it's become a staple of our shows). It would have been a brilliant marketing strategy, and I wish we could take credit for it. For us it was part of the "Anna Sun" music video and we thought that would be it, and people kept coming out with their faces painted and now that's part of the tribe … the community that lingers and continues to be the visual representation of what connects all us.

WCPO: Why do you think you attract so many rabid young fans? What's the message you're giving them that seems to resonate so loudly?

Maiman: I think what we're giving people is a feeling of not being alone, which is why we named our live record "You Are Not Alone." It gives them this sense of community and people who are maybe weirdos and not the most popular kids a place to connect with other weirdos like us and have that sense of community and belonging. That's always been our goal with the live shows, creating this safe space where people can let go and be themselves and feel good.

WCPO: Your music and performances have such a relentlessly positive vibe. How do you keep that up?

Maiman: I think it's the fans. If you came to rehearsal and saw the four of us playing, it wouldn't always feel so uplifting. When I think of something like "Shut Up and Dance," we get tired of rehearsing it, but I never get tired of performing it because it's always different. Seeing people dance and clap as one is such a magical experience that it never gets old. I draw so much from them.

WCPO: What can fans expect from your new tour?

Maiman: We just got done with a week of rehearsals and everything is stepped up on this tour. The production is on another level, we're playing lots of new songs, and it's been a long time since we did a tour like this. We had our first night on bus (recently) and I was thinking about it. It's been two years since I was on a bus, which is a long time for us. It's really good to be back.