UpSpring Summer 360: Learning and fun for kids who are homeless or have 'housing insecurity' 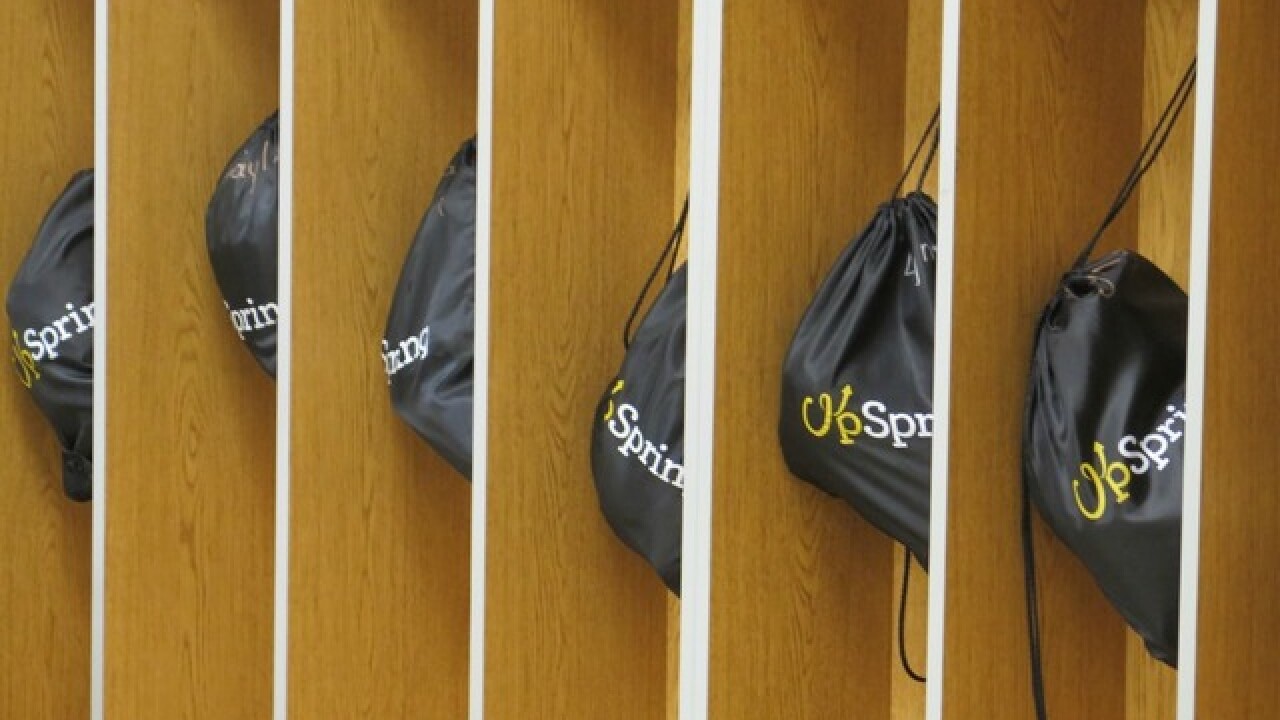 Copyright 2017 Scripps Media, Inc. All rights reserved. This material may not be published, broadcast, rewritten, or redistributed.
Lucy May | WCPO
<p>Students UpSpring backpacks hang on hooks in a classroom at their summer camp.</p> 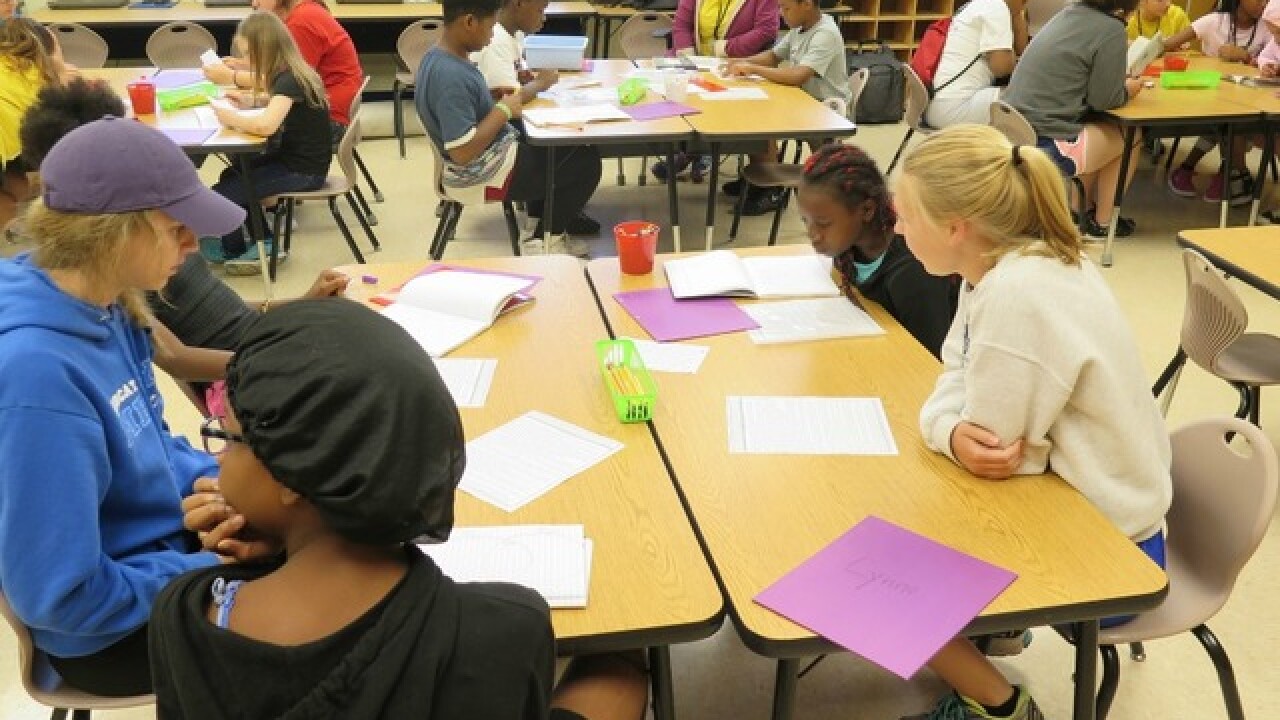 First she went to see “Captain Underpants: The First Epic Movie,” ate at Hofbrauhaus Newport and played as many games as she wanted at Game Works. For the second field trip she rode a boat on the Ohio River and had lunch at the Ludlow Bromley Yacht Club.

“I’ve never been on the Ohio River before,” said Bri, who is 11. “It was really fun. On the boat, I was able to honk the horn, and we were able to learn kind of how it works.”

Combining fun and learning is what it’s all about at UpSpring Summer 360, a day camp that serves kids like Bri -- children between the ages of five and 12 who are homeless or are experiencing what’s known as “housing insecurity.”

This marks the 20th anniversary for UpSpring’s summer program in Cincinnati and the second year the nonprofit organization has had a location in Northern Kentucky, too. Each location has between 70 and 80 kids. The goal is to provide young participants with extra lessons in math and literacy along with field trips at least once a week and enrichment that help make their summers more like what other kids experience.

It takes even less time to change kids’ lives, said Lenice Williams, director of the Cincinnati camp being held at Ethel M. Taylor Academy this summer.

“The camp allows for students to go beyond the normal boundaries that are set for them,” she said. “We were going to see ‘Captain Underpants,’ and as we walked into the darkened room a child just said, ‘Ooooooooooh! I’ve never been to the movies before!’”

Some of the children at Summer 360 are staying at homeless shelters or in motels with their families. Others have recently entered the child welfare system and are in foster care. Still others are like Bri, who has a stable home living with her mom, stepdad and siblings at her stepdad’s parents’ place.

Many of the kids at Summer 360 don’t have places to call home that are as stable as Bri’s. The camp’s teachers and staff encourage those children to leave behind the troubles that might be part of their lives.

“You can’t take away the circumstances that they’re enduring,” Williams said. “But we do try to switch the focus.”

Ice cream for the first time

The camp staff does that by high-fiving students when they get off their buses each morning, playing soothing music in classrooms and offering plenty of physical activity. Camp participants get breakfast, lunch and snacks every day. They also get new sneakers if they need them along with new swimsuits, flip-flops and goggles for the time they spend at nearby pools.

Still, UpSpring staff knows that some kids have worries that are too big to overcome with hugs and good intentions. The camp has counselors on hand for kids who need them along with constant reminders from Williams and the other staff members that it’s OK for children to relax and enjoy what the camp has to offer.

“For this certain amount of hours, you’re here, you’re safe and you’re protected,” Williams said. “And you’re going to have fun.”

It’s a formula that has worked for scores of kids over the years. Last year, 95 percent of the camp’s participants either retained or increased their literacy and math skills after their time in camp, Moroski said.

Not only that, but more than 90 percent of the children who participated also saw increases in several “well-being measures,” too, including their self-confidence, hope and feelings of stability.

A big part of that success comes from ensuring that participants have what Moroski calls “important childhood experiences.” Around here, that means going to a Cincinnati Reds or Florence Freedom game, finding a flavor of Graeter’s ice cream they like or deciding which they like better: Skyline or Gold Star.

“That gives our kids the ability to relate and socialize with their peers,” he said. “We had a 9-year-old girl eat ice cream for the very first time because of our summer camp.”

Helping kids and their parents

Last year, UpSpring started reaching out to offer the parents of its campers some extra help, too. The organization asked on its intake forms whether family members would be interested in workforce opportunities.

“We think parents can be working on themselves and ideally, at the end of the summer, maybe have a more stable living environment,” he said.

UpSpring refers those adults to United Way of Greater Cincinnati, which has grant money that can help parents get job training.

UpSpring and United Way are continuing to tweak the program to try to help more parents in the most effective way possible, said Amy Weber, United Way’s STEPS project manager. STEPS stands for Supporting Transitions to Employment for Parents, and it’s a program aimed at helping single mothers who have at least one child who is 8 years old or younger.

The program has coaches who can work with moms to figure out whether they’re ready for career training programs and what type of program might be the best fit, Weber said.

Bri’s mom and stepfather don’t need that kind of help at this point. Bri isn’t one of the children who has never had ice cream or been to the movies. She has even been to Kings Island -- lots of times.

And her mom and stepdad both have steady jobs at this point. But that doesn’t mean things have always been easy for her family.

Her mom traveled to Northern Kentucky with Bri and her older sister nearly a decade ago. Stubbeman’s father had a stroke, and family members advised her to visit to say her goodbyes.

Stubbeman’s father ended up surviving, but her husband back in North Carolina decided that she had left him and filed for divorce, Stubbeman said.

What followed were several years of struggling to raise two young daughters while getting by on public assistance and trying to go back to school so she could get a job to better support herself and her kids.

Summer fun and peace of mind

Stubbeman raised her kids on her own until she remarried in 2011, but life got complicated again when her husband lost his job in 2012.

They did the math and decided they could probably afford to keep living in the mobile home they owned, but just barely.

They sold the mobile and moved in with Stubbeman’s in-laws. She finished her schooling and got a job six months later. Her husband went back to school and finished in September 2015. It took him about eight months to get a job.

Things are much better for the family now, Stubbeman said.

“We would like to get caught up on some bills and maybe start looking for a house in the spring time,” she said. “Hopefully. That would be the plan. But things happen when they happen, and we’ll just see when the time comes.”

For now, it’s better for the kids to stay where they are, Stubbeman said, and the fact that they’re doubled up with family makes Bri eligible for UpSpring’s programs.

That’s good news for Stubbeman, who said the camp gives her peace of mind and gives Bri opportunities that the family couldn’t afford on their own.

“It sure beats wondering if they are at home watching TV all day,” she said. “I know where she’s at, I can get ahold of the people in charge. I know that she is well taken care of, and I know she is having a good time.”

It’s also good news for Bri, who attended UpSpring’s after-school program at Newport Independent Schools, too. This is her first year at Summer 360, she said, but Bri was pretty confident she would like it.

“I thought it would be a lot like how UpSpring was at my school because we learned a lot of things and still had fun,” she said.

It turns out she was exactly right -- except that Bri said Summer 360 is even better than she expected.