'UC gave me an opportunity to have a life' 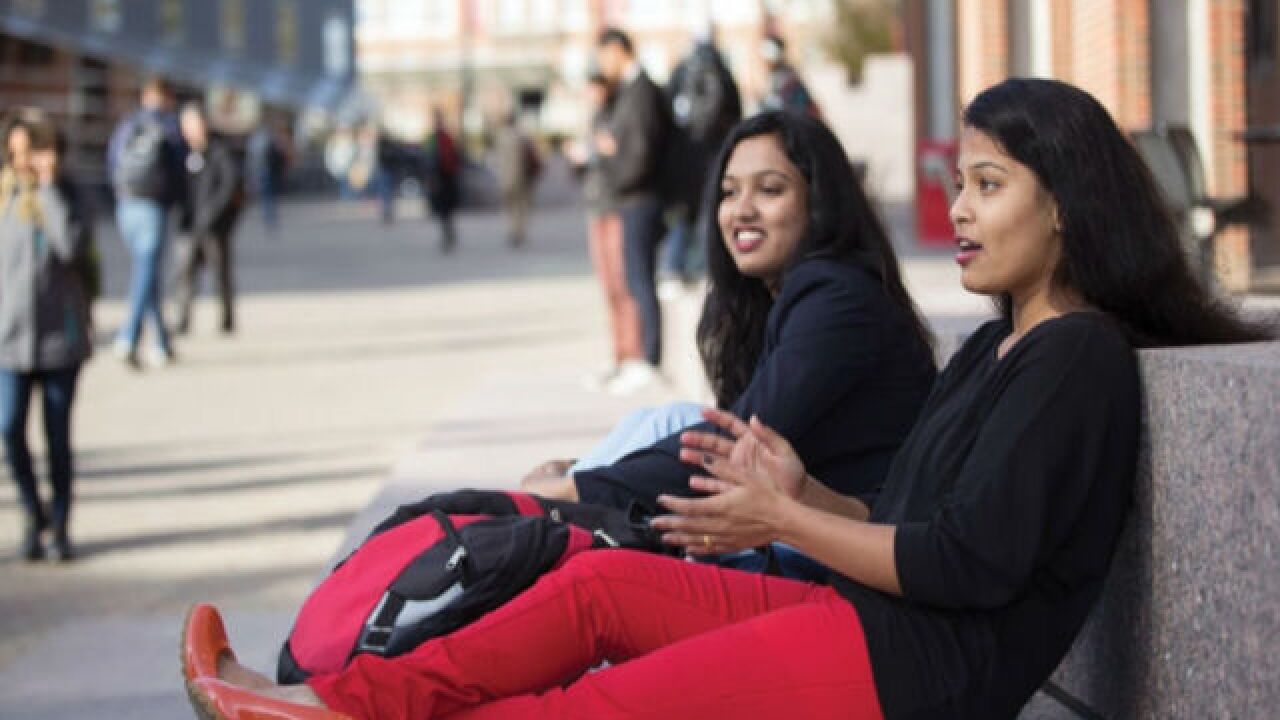 In 2011, they met each other for the first time in Mumbai, India, after they were selected as the first-ever recipients of the University of Cincinnati's Global Scholarship.

They each received a $150,000 scholarship that paid for their tuition, housing, meals, health insurance and travel costs.

It has transformed their lives.

They've gone from rural students who had trouble with English to accomplished, sophisticated women well on their way to new opportunities.

Last weekend, Lahane received her bachelor’s degree. She's also been on the dean's list for several semesters. Randhave, who graduated last semester as a biology major, will be starting a master's degree program this fall.

Now, after years of hard work, both look back with gratitude and wonder and recall how they met, became roommates and friends for life, and received a prestigious education in America.

Lahane grew up in a basic house with mud floors. The daughter of a rice farmer, she walked 90 minutes to get from home to school because the family had no money for bus fare. She couldn’t afford textbooks, so she copied the chapters from her friends and excelled at the material. Randhave had similar experiences, but she does not like to dwell on them; she prefers to look forward.

The man who changed the fates of these two students was Jon Weller, UC’s director of international admissions. It was his idea to seek out two students who excel at academics but are crippled by financial hardship and unable to pursue their dreams.

When Weller came looking for these students, UC’s partner, Lend-A-Hand India, a nonprofit that helps the poor, had already searched the country for deserving students, spending 10 months on interviews and academic competitions.

The nonprofit introduced Weller to Lahane and Randhave, and from that point onward, Weller became a mentor to them. He followed their progress throughout the semester. For Thanksgiving, they came to join his family to experience what it was like to eat turkey.

Weller arranged for them to have extra English classes so they could do better with the language. He found them a dentist. He found resources for anything they needed.

All the while, Weller knew where they came from and how drastic a move this was.

'I Will Walk With pride'

The two girls had left their villages with fanfare, celebrations and high expectations. On their last day at home, there was a parade to honor the girls, and Weller walked in it wearing a turban — a gesture of respect. The Indian media covered the story of the two students extensively.

Both young women said that if they had not been given this chance, they would not have succeeded.

“UC gave me an opportunity to have a life. If I stayed in India, I would just be a girl from a village,” said Randhave, who is now in the process of applying to graduate schools in the U.S. and dreams of curing diseases. “Now when I go back, I will get respect, and I will walk with pride into any company. And I want to help the poor and homeless in India.”

Lahane, too, said one day she will return to India with her husband, Bipin Shedge, also a UC graduate, to work on helping other poor students by forming a nonprofit.

Lahane and Shedge met as undergraduates and briefly went back home for the wedding.

Now Lahane is in California looking for jobs while Shedge already has one as a mechanical engineer.

“These two students have been a big success story. They have worked hard against all odds,” said Weller, who has changed UC’s international admissions policy. “These two students had never been on a plane. When they came here, culture shock hit them hard. The food, the weather, the English — they were stumbling blocks, but they thrived.”

There are 1,053 students from India. They are from wealthy households, but Weller knew from his frequent travels to India that there were many who could never afford an education in the U.S.

“I was looking for students who would do well and change their lives and their country one day,” said Weller. He said the next two students will be from Nepal, a place where families have lost everything in a recent earthquake for which government aid is still pending.

Both Lahane and Randhave credit their families for their success. All these years, the two women have sent money earned from their campus jobs and paid internships to fund their siblings' college education in India and to improve the lives of their parents.

Both have messages for aspiring students.

“Do not be afraid. Believe in yourself. You can do whatever you want in life,” Lahane said.

“If you just try, if you just challenge yourself, you will be surprised to see how much you can do,” Randhave added.