UC team working to transform how we travel 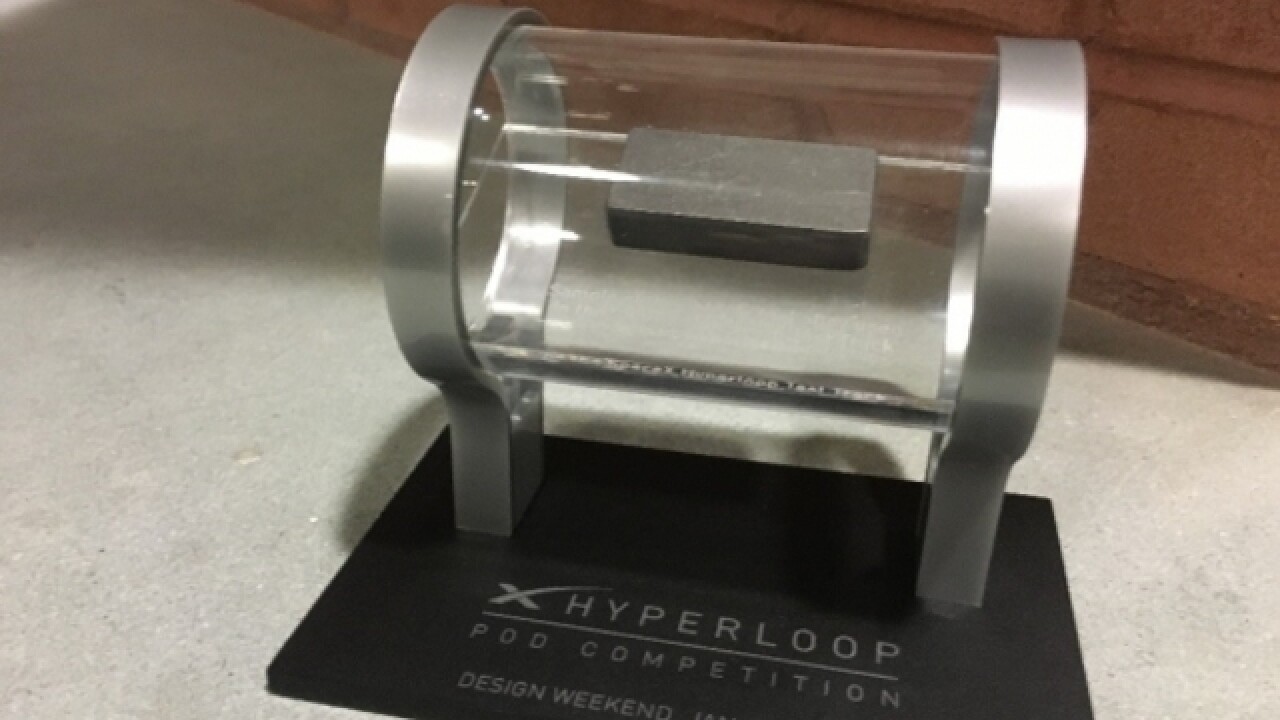 CINCINNATI -- Sixty University of Cincinnati students have more at stake heading into summer than how well they do on their end-of-the-year exams.

They’re members of Hyperloop UC, a team competing in a world contest to create a design concept for what could be the future of high-speed transportation.

The team is one of 30 from around the world to advance far enough in the contest to be invited to compete in its final round this summer.

Hailed as the future fifth form of transit – after planes, trains, boats and cars – Hyperloop is a concept developed by SpaceX and Tesla Motors founder Elon Musk in 2013 to transport 20 to 30 people via a pod propelled through a 12-foot diameter tube using solar energy and traveling at high subsonic speeds.

If Hyperloop becomes a reality, people could travel from Cincinnati to Chicago in only 30 minutes.

Dhaval Shiyani, a 25-year-old master’s student in aerospace engineering at UC, had been interested in the Hyperloop concept ever since he read a white paper written by Musk on the topic in 2013. When SpaceX announced the competition, Shiyani built a team of seven or eight UC students to create a preliminary design of what their system would look like.

“We have students from almost every school at UC,” he said.

Destined for the Finals

In January, 124 teams from 20 countries – out of the initial 1,200 applicants to the SpaceX Hyperloop Pod Design Competition from around the world – were asked to showcase their designs in the SpaceX Hyperloop Pod Design Weekend in Texas. Hyperloop UC was chosen as one of 30 teams to advance to the final round this summer in Hawthorne, California, in which teams will demonstrate their Hyperloop concept on a 1-mile test track.

Now that the design weekend is over, the team is “at a crucial stage where we have to test all the systems so that all the sub-systems in the simulated design actually work in the competition,” said Rohan Nachnolkar, a 22-year-old master’s student in mechanical engineering at UC and the structural dynamics lead for Hyperloop UC.

“The reason we have to do extensive testing is because this has never been done before,” Shiyani said. “One thing people fail to realize is that this is a completely new transportation system. None of the systems that are used on our design have ever been tested under the conditions that we are testing at, so the only way we can make sure they work is to test.”

In addition to being fast, Shiyani said, Hyperloop transportation also is a beneficial alternative to today’s high-speed travel because it produces and consumes clean energy – instead of polluting the environment – and because it’s convenient.

“Boarding a plane is a lot of hassle,” he said.

Sid Thatham, a 25-year-old master’s student in chemical engineering at UC who is also working toward his MBA and serves as the director of operations for Hyperloop UC said he wanted to join the team because it’s exciting to be a part of a project that could add to Ohio’s fame as the birthplace of aviation -- by making it the birthplace of Hyperloop as well.

“I personally want to be on this project because I know that this is going to be the next big thing,” he said. “Like Elon Musk himself said, 'I can either be part of it or watch it happen.' ”

Monetarily speaking, “whatever we get from the community will be going into the project,” he said, adding that Hyperloop UC also needs help from the manufacturing community.

“We have to build systems in less than two or three months, which is a pretty steep timeline for any manufacturing industry, so we need all the help we can get to manufacture the systems,” Shiyani said.

In terms of publicity, Hyperloop UC’s members want to make the people of Ohio – and the people of Cincinnati, in particular – feel like they own the project, so they want to raise awareness of what the project is. They also plan to visit local high schools and conduct demonstrations to teach young students about new technologies like Hyperloop.

Going for the Win

Although the competition was originally open to students and corporations, it’s evolved into a primarily student-based event, Shiyani said, although he notes there is one non-university team that qualified for the final round.

Thatham said Hyperloop UC is most wary of Massachusetts-based MIT and the Netherlands’ Delft University of Technology in the final round.

“(They) have done a great job, and they’re the toughest competitors,” he said.

If Hyperloop UC wins, Shiyani said SpaceX hasn’t released many details yet on exactly what it will receive, although he said he does know there would be prizes, international coverage and plenty of potential for future expansion.