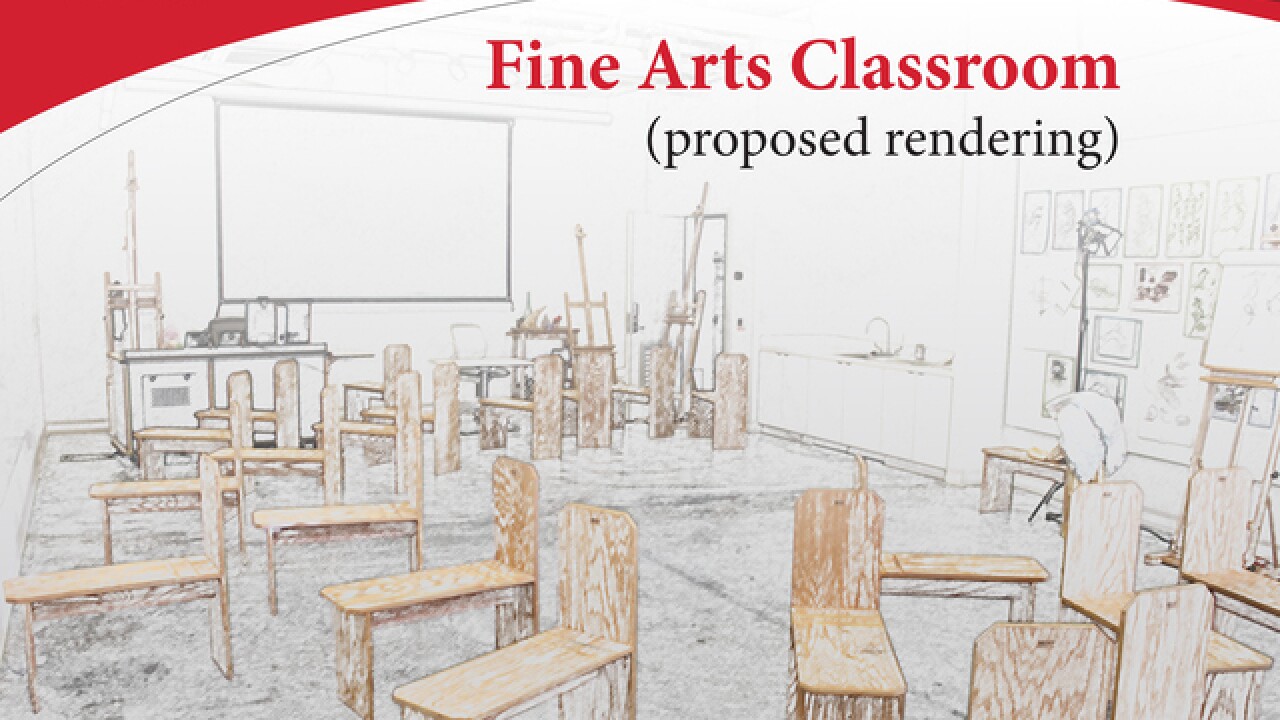 Provided
<p>The University of Cincinnati's Clermont College is raising money to add new classroom space for its fine arts program, which will separate its 2-D (drawing, painting, printmaking and book arts) and 3-D (ceramics, sculpture, weaving, fibers and metal clay jewelry) offerings. The college also plans to offer fine arts mini-courses to adults and children in the community without the time commitment of a semester-long course.</p>

Two spaces at the University of Cincinnati’s Clermont College are receiving some long-overdue attention this year, thanks to the passion of new school leaders, a goal of extending programs beyond campus, and the support of the community.

On April 5, UC Clermont is hosting “The Main Event” fundraiser and auction at the Holiday Inn Hotel & Suites in Eastgate to raise money for student scholarships, a library renovation and a new fine arts classroom.

“Our library is very much a relic of the 1970s (when the college and library were founded) — with furniture, service points and square footage to match,” said UC Clermont Library Director Katie Foran-Mulcahy. “Even though our students attend UC at a branch campus, that doesn’t mean they don’t deserve to have a modern library space that fits their academic needs.”

UC Clermont raises money for student scholarships every year, she said, but raising funds for a library renovation and a new fine arts classroom — and the level of funds the college is looking to raise — is unprecedented.

When the college was founded in 1972, UC Clermont Dean Jeff Bauer said, it had a total of 281 students. Today, enrollment is at 3,200 students.

Bauer took office as dean of UC Clermont in May of 2015, after serving the college for 21 years as a faculty member and department head. Part of his platform when taking the role of dean, Bauer said, was to focus on several areas that had been historically underinvested in and undervalued at the college. The library and fine arts space were two of those areas.

To get the ball rolling, Foran-Mulcahy, who served as interim library director from January of 2014 until July of 2015, when she was named director, came to Bauer with “an amazing array of ideas for updates,” Bauer said.

“As I was moving into the dean’s office and talking about our space and the impact it has on students, you could see the passion in her eyes,” he said. “Katie talks about the library as if it’s the best place on earth. The passion she and the fine arts faculty bring to the table make it easy to connect with key donors.”

The already-completed first phase of the library renovation, which included the addition of shelf space for periodicals, more than 150 electrical outlets, new lighting, a sign on the first floor, new carpet, paint and window graphics, as well as a laptop bar and computer and collaboration chairs, was completed on a shoestring budget, Bauer said.

The second phase, which will include replacing the furniture, moving the information desk to the center of the library, remodeling the existing second-floor study rooms and creating new study rooms with access to technology, and creating office spaces for reference librarians, will cost roughly $270,000 and begin this summer.

“I think it’s a stretch project, for sure, to be able to raise that kind of money, but the students are worth it,” Foran-Mulcahy said. “I really believe that they are.”

The eventual goal for the library — a goal that Foran-Mulcahy sees coming to fruition in the next 10 years — is to double the square footage of the library’s space from its current 8,445 square feet and to add additional services, such as a writing center.

Doubling the size of the library would require state funding, Bauer said.

The college also will be able to begin teaching mini-courses to adults and children in the community without the time commitment of a semester-long course, Frigard said.

“The key, central connector to these initiatives is that they will impact any student who comes to campus,” Bauer said, “and they will further establish us as a resource to the community. We really want to be the hub for cultural activities in the area, because that’s our mission.”

Dave Gooch, president of Clermont County-based Park National Bank, said his bank has been donating to UC Clermont for more than 20 years and recently gave to the library initiative.

“We have six branches in Clermont County and many of our associates are either graduates of UC Clermont or are students there currently,” he said. “UC Clermont has been a great community asset for a long time.”

Batavia resident Amy Elberfeld, who, with her husband, Dave, also gave to the library initiative and started a scholarship fund for students in 2011, agreed.