Old homes in Newport; green ones in Ohio 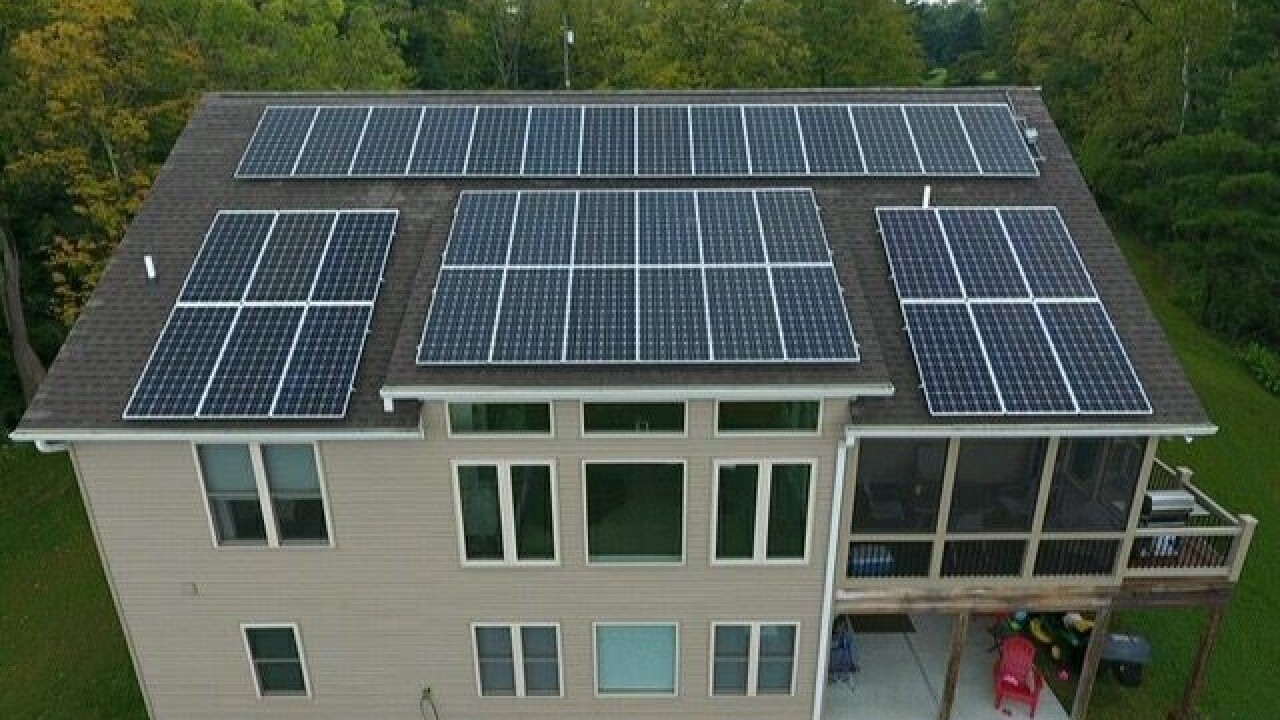 Copyright 2017 Scripps Media, Inc. All rights reserved. This material may not be published, broadcast, rewritten, or redistributed.
Provided
<p>Milford resident Walt Fischer's 38 solar panels process so much energy his monthly bill is about zero. He'll be hosting during the Green Energy Home Tour. (Photo provided by Dovetail Solar and Wind)</p>

This will be the third year that Green Cincinnati Education Advocacy has been part of a statewide effort to promote the installation of solar panels on rooftops around the region. Nine solar-powered homes that stretch from Northside to Over-the-Rhine and Columbia Tusculum to Milford will be open, most of them from 10 a.m. to 4 p.m. Saturday. Their owners will be on hand to share their solar experiences and answer questions about their systems.

"It's for people who are planning to put solar on their homes, to let them know how it works, what's it like and what's involved," said Over-the-Rhine communications and marketing specialist Chuck Lohre, one of the tour's four organizers.

Lohre's Frank Lloyd Wright home in Clifton isn't right for a rooftop solar panel set-up, but most houses are, he said, and that's one of the points the self-guided, free tour will drive home.

The 2014 Milford home of Walt Fischer, who is another of the tour's organizers, was built specifically for solar. The last of Fischer's 38 panels were installed last year and earned the house a "net zero" certification by an independent energy engineer.

Fischer's energy bill generally is zero, he said, except in the winter when the cloud cover reduces the energy his panels collect. He has to plug in his Chevrolet Volt for several months, when his bill increases to about $20.

Fischer said he has met a lot of people who don't realize the 30 percent federal tax-saving incentives to install solar are still available and make the investment payback period a lot shorter. He said his solar system will have paid for itself in a projected 11 years, possibly fewer.

People also need to know there's help out there for them. The Greater Cincinnati Energy Alliance will visit your house and advise you on the proper system to install. They can make buying panels simple and affordable, Fischer said.

More than 50 people have signed up to install solar systems through the GCEA in the past couple of years and prices for panels have decreased by 80 percent in the past six years, Fischer said.

"You don't have to live in Florida," Fischer said of installing a residential solar system. "It works great in Cincinnati."

Those interested in taking the tour, or just part of it, can read about the nine properties and chart them on a map here.

Beyond the Curb -- Newport

Northern Kentucky's popular tour returns to Newport on Sunday with 15 properties open to the public from 10 a.m.-4 p.m. Started by the Catalytic Fund in 2015, the tour has highlighted the advantages of urban living in Dayton, Bellevue, Covington and Ludlow, as well.

Reaction to the last tour in Ludlow, which is emerging as one of the last urban basin neighborhoods with a substantial and affordable housing stock, was all positive, said Jill Morenz, Catalytic's director of community initiatives and communications.

"Three Ludlow (for-sale) homes on the tour went pending within days after," Morenz said. "The city felt a positive impact from it. This is a boom town where you can buy an affordable home, have that urban feel and later sell at a profit."

Beyond the Curb, she said, shows that "people are not limited to OTR and Walnut Hills. There are charming towns in Northern Kentucky that are really attractive to people. They're really strong in retail and restaurants and offer a range of prices."

Many might be priced out of the trendiest neighborhoods, such as East Row Historic District in Newport and the Licking Riverside Historic District in Covington, but areas to the south and west of them are coming back as urban dwellers buy up and preserve old houses, she said.

The Newport tour is mostly of houses, one of which is not completely remodeled. There are apartments and commercial properties on the tour as well. All can be reached on a walk that is a little more than two miles long, Morenz said.