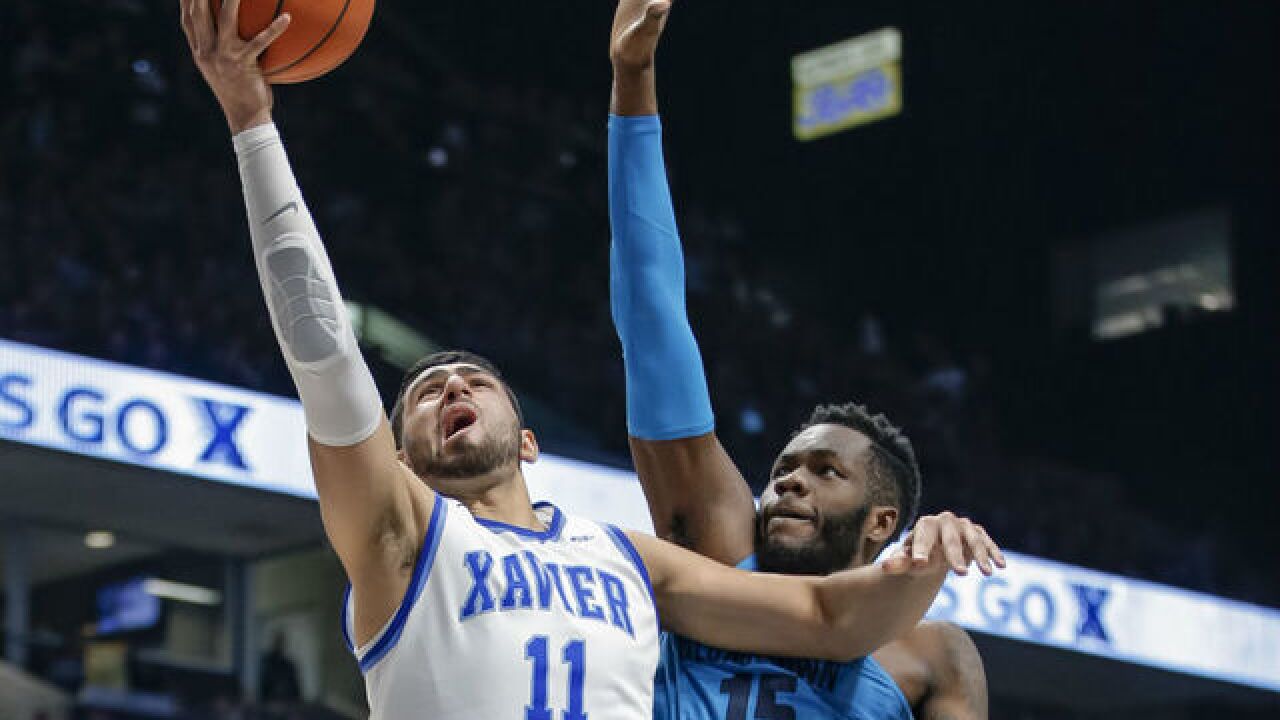 Image copyright 2018 Getty Images. All rights reserved. This material may not be published, broadcast, rewritten, or redistributed.
Michael Hickey | Getty Images
<p>Kerem Kanter #11 of the Xavier Musketeers shoots the ball against Jessie Govan #15 of the Georgetown Hoyas at Cintas Center on Feb. 3, 2018. (Michael Hickey/Getty Images)</p>

CINCINNATI -- In what might seem on the surface like an odd pairing, Xavier graduate transfer Kerem Kanter has struck up a friendship with senior guard J.P. Macura.

Kanter is a 6-foot-10 forward and gentle giant, Turkish-born and soft-spoken. Macura is a 6-foot-5 guard, Minnesota bred, brash and at times antagonistic.

“We’re roommates, so we spend a lot of time together,” Kanter said. “I’m glad I have him on the team. He has helped me come out of my shell.”

And boy has he.

Kanter has hatched quite the career in his first and only year of eligibility at Xavier. He's quickly evolved from a raw Horizon League graduate transfer into a force in one of the nation’s premier college basketball conferences, the Big East.

“We were joking about it as a coaching staff,” Musketeers coach Chris Mack said. “It’s hard to believe that just a couple years ago he was playing four minutes a game, for a mid-major school. It’s mind-boggling.”

Kanter’s progression since November is eye-popping.

He has scored in double figures in three straight games and seven of the past eight. He has averaged 12 points in Big East Conference games, including 22 and a Xavier career-high-tying 13 rebounds against St. John's on Jan. 17 at Cintas Center. Kanter, who has started each of the last six games, scored a career-high 24 points in a loss at Providence on Jan. 6, including 19 in the second half.

He has three double-doubles this season. He scored 12 points in Saturday's 96-91 overtime win over Georgetown at Cintas.

His body language on the court has changed. He’s playing with more energy and resolve. His teammates have noticed.

“We’ve always known he was going to be able to do things like this,” XU senior forward Sean O’Mara said. “He has an incredible ability to play on the perimeter, which messes with a lot of teams. He’s capable of going in the post, or stretching them out. It doesn’t surprise us, but he’s definitely playing with a lot of confidence”.

At Wisconsin-Green Bay, Kanter had to play an up-tempo style, something that wasn’t conducive to his skills. It also took a while for Green Bay to figure out what they had in Kanter, who averaged four minutes as a freshman and fewer than 10 minutes his second year. He played in 47 games in his first two seasons in Wisconsin, with zero starts.

He was a coveted high school recruit, but the possibility he would play professionally in Turkey scared off potential suitors such as Michigan State and Miami (Fla.).

Following a standout senior season at Green Bay, suitors lined up for Kanter, with schools like Creighton, Kansas State, Seton Hall and Baylor showing interest after he tested the NBA waters, but withdrew his name from consideration.

“Obviously, it was a big change for me,” said Kanter, of coming to Xavier. “Coming from a smaller school, expectations weren’t as high. We didn’t have as much size. The facilities were much better (at Xavier). I was ready to take on that challenge.”

It was clear, however, that there was going to be an adjustment period. He stumbled through the first three games, going 2-of-8 shooting, 0-for-5 from 3-point range, with two turnovers.

Many thought the Crosstown Shootout would be a tall order for Kanter, against Xavier’s most physical opponent to that point, and amid a typically raucous Shootout crowd at Cintas. But Kanter rose to the occasion, scoring 17 points on 6-of-8 shooting including a pair of 3-pointers in XU's 89-76 win.

Kanter, 22, made his first start for Xavier on Dec. 19 against Marshall, scoring 16 points with a Xavier career-high 13 rebounds. And off he went.

“From the very beginning, everybody knew he was a very good player,” Mack said. “Early on, his confidence waned a little bit. It’s been fun to watch Kerem’s development from the time he’s been here.”

The game has slowed down now for Kanter, who scored a perfect 800 on the math portion of the SAT.

He doesn’t have to think as much on the court, only react.

“He’s really a quiet guy, but he’s brilliant,” Mack said. “It’s hard to fit in as an older (guy), got your degree, trying to learn new friendships, establish yourself as a player. He’s done an incredible job.”

Kanter is enjoying the competition and cameraderie with fellow big men O’Mara and Jones.

The XU bigs have complementary skills: Kanter is an offensive threat, Jones is a defensive force and O’Mara is steady on both ends, giving Xavier another element that Kanter believes is indicative of a Final Four team.

“We don’t want to look at that picture right now, but we have a chance,” Kanter said of a deep NCAA Tournament run. “The beauty of our team is we have guys who can step up when we aren’t having a good game. We always push each other in practice.”

Speaking of pushing each other, Kanter’s brother, Enes, is a former Kentucky Wildcat and seven-year NBA veteran. Kerem recalls many spirited one-on-ones with his brother in Turkey.

After a season in the rugged Big East, and battling O’Mara and Jones in practice, Kerem says he will be better prepared for any rematch with big brother.

“I’ve gotten my body to another level,” he said, smiling. “I’m ready to take on that challenge.”