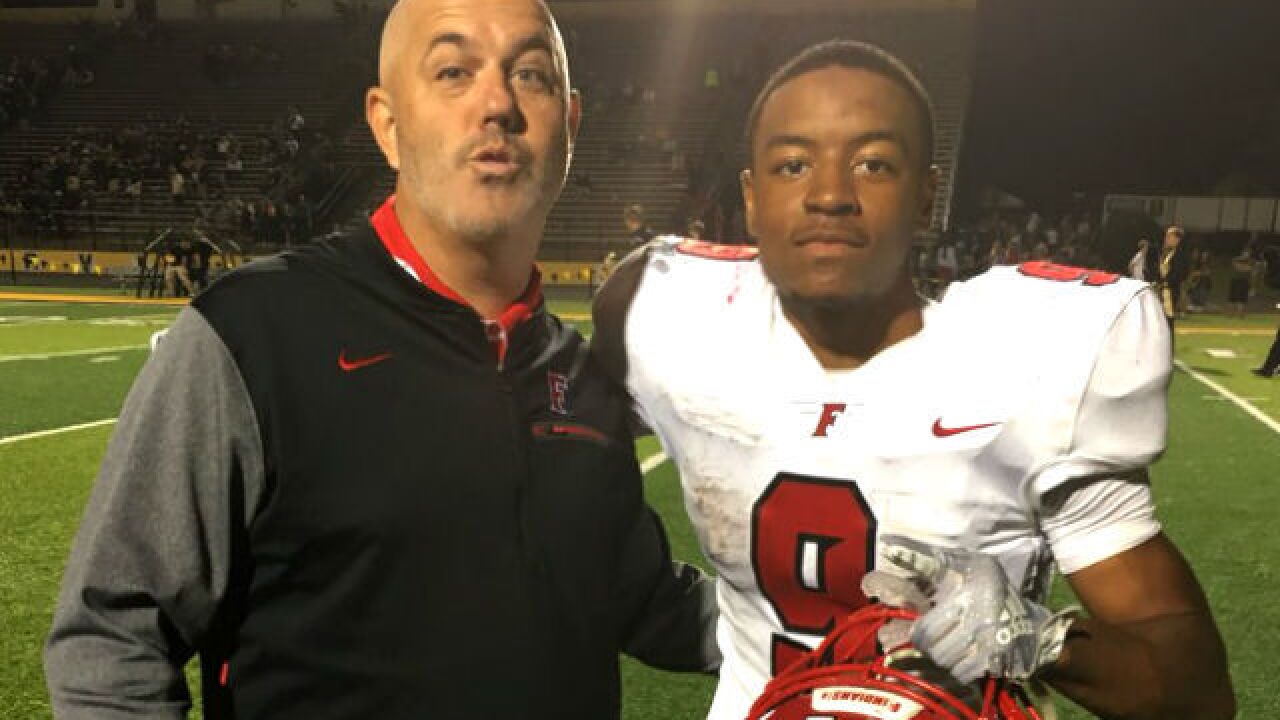 Copyright 2018 Scripps Media, Inc. All rights reserved. This material may not be published, broadcast, rewritten, or redistributed.
<p>Fairfield junior JuTahn McClain had seven touchdowns including a 92-yard kickoff return in the Indians' win at Centerville Friday. Here he is pictured with Fairfield Athletic Director Mark Harden.</p>

CINCINNATI – Fairfield junior tailback JuTahn McClain had quite the 2018 debut Friday night - and it paid off with two Big Ten offers the next day.

On Saturday afternoon, McClain picked up offers from Michigan and Maryland.

“We came into the season discussing different ways of manufacturing touches for him and it was part of our game plan to get him as many as we can,” Fairfield coach Jason Krause said late Friday night. “Not the traditional hand-it-off between the tackles. I think it worked tonight.”

“He’s so fast on the field right now,” Krause told WCPO in July. “He plays at a different speed. He’s doing things on the football field I haven’t seen in a while.”

McClain, who already had scholarship offers from the University of Cincinnati, Kentucky, Louisville and Rutgers, had touchdown carries for 69 yards (second quarter) and 57 yards (fourth quarter).

Krause said in the preseason the 5-foot-10, 175-pound McClain can make his cuts at full speed and his moves are reminiscent of former Middletown High School and Ohio State standout Jalin Marshall, who also played in the NFL. Krause coached Marshall at Middletown.

McClain’s touchdown total was one shy of reaching the minimum number for the Ohio High School Athletic Association category for most touchdowns in a game.

Krause credited the blocking of senior tight end Erick All (Michigan commit) on the perimeter Friday night. Fairfield had 460 yards of total offense. Centerville had 500 yards of offense.

Adding to the record books

Roger Bacon sophomore running back Corey Kiner tied a school record by rushing for six touchdowns in the Spartans’ 54-7 win over visiting Reading. Kiner, who has offers from Indiana and Kentucky, had 16 carries for 234 yards.

Kiner tied with Jarrett Dean, who had six rushing touchdowns against Chaminade Julienne in 1998. Kiner already has the school record for most rushing yards in a game (302) set against Western Hills in 2017.

“They played for the ‘WE’ instead of the ‘ME,’” Oak Hills coach Kyle Prosser said. “It shows them that the entire offseason workouts, conditioning, early mornings, being coachable and buying in to each other is all part of the process of success.”

East Central (1-1) is the reigning 4A state champion in Indiana.

Elder senior wide receiver Kyle Trischler set a new school record for most receptions in a career Friday night. He had nine receptions Friday night and put him at 135 and counting. Max Mazza held the previous record with 131. Elder defeated Gahanna Lincoln 31-0.

Trischler had nine receptions for 90 yards. Elder had 411 yards of total offense. Senior quarterback Michael Bittner was 22 of 34 passing for 261 yards and two touchdowns. He also rushed for a touchdown.

Doug Rosfeld won his first game as the Crusaders’ head coach Friday night when Moeller defeated Clarkson North (Ontario) 27-14. Senior Chrystopher Watkins had 119 yards rushing and two touchdowns for Moeller (1-0). Senior linebacker Luke Szabados had five tackles including a sack. Rosfeld, a 1997 Moeller graduate and former assistant, had been UC football’s director of player development before being named the Moeller coach in December 2017. Friday was Moeller’s first home opener since 1995.

Sophomore running back Denarius McKenzie rushed for 116 yards and two touchdowns as Woodward defeated Withrow 31-0 Wednesday night at Stargel Stadium in the Ohio opener of the 21st annual Skyline Chili Crosstown Showdown. McKenzie was named the Most Valuable Player in the game.

“He will be special,” Woodward coach Kali Jones said.

“I liked the fact that our guys kept our composure in the midst of a big-time rivalry game,” Jones said. “We carried ourselves with purpose.”

“He is a very talented, very athletic and smart young quarterback who I expect to perform more like a junior,” Purcell Marian coach David Wirth said this preseason. “He should the next major quarterback in my offensive system (similar to Zach Toerner at Badin and Blake Bir at Covington Catholic). He is very analytical, deceptively athletic and has a great arm.”

Hoover threw a touchdown pass with 6:07 left and his extra point provided to be the difference against the Silver Knights.

Senior wide receiver Da’Montay Everett had 10 receptions for 160 yards and two touchdowns. Junior safety Laurence Christian had an interception in the game. He played every snap at safety last season and took many snaps at wide receiver, too.

Wirth said earlier this month the team was light years ahead of last season at the same point in time. “We are a little less in numbers but much more focused and our capacity to sustain hard work has increased as well,” Wirth said.

Steve Sheehan doesn’t want to commit past the 2019 season but he is certain Roger Bacon will be his final coaching stop in his storied Cincinnati-area career.

Sheehan, 73, is the Roger Bacon Defensive Coordinator this season after spending the past four seasons at Princeton. Sheehan returns to the school that gave him his start in coaching and teaching in 1968 after college when he coached the junior varsity for the late Bron Bacevich.

Sheehan said the Spartans were a good fit for what he wanted late in his career. He’s enjoyed the preseason with the Spartans. He believes Roger Bacon could have a very strong next two seasons.

“He has been a huge asset to just overall team organization,” Roger Bacon head coach Mike Blaut said. Sheehan and Blaut previously coached together for nine years at Oak Hills.

“He was my mentor,” Blaut said. “He’s the guy who kind of taught me how to coach.” Sheehan led