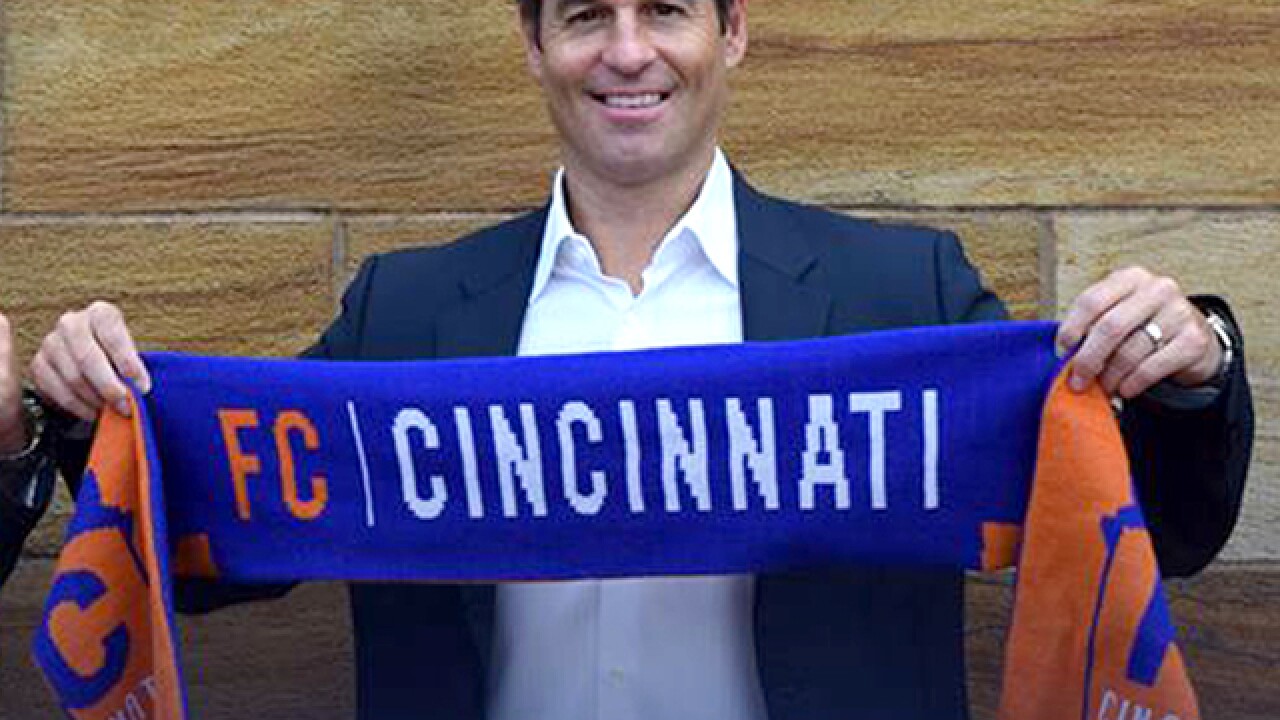 File
<p>"The work we've put in in the preseason has been very good," FC Cincinnati coach John Harkes says. "It's been positive, and it's a good group, good mentality, and we're ready to test ourselves.”</p> 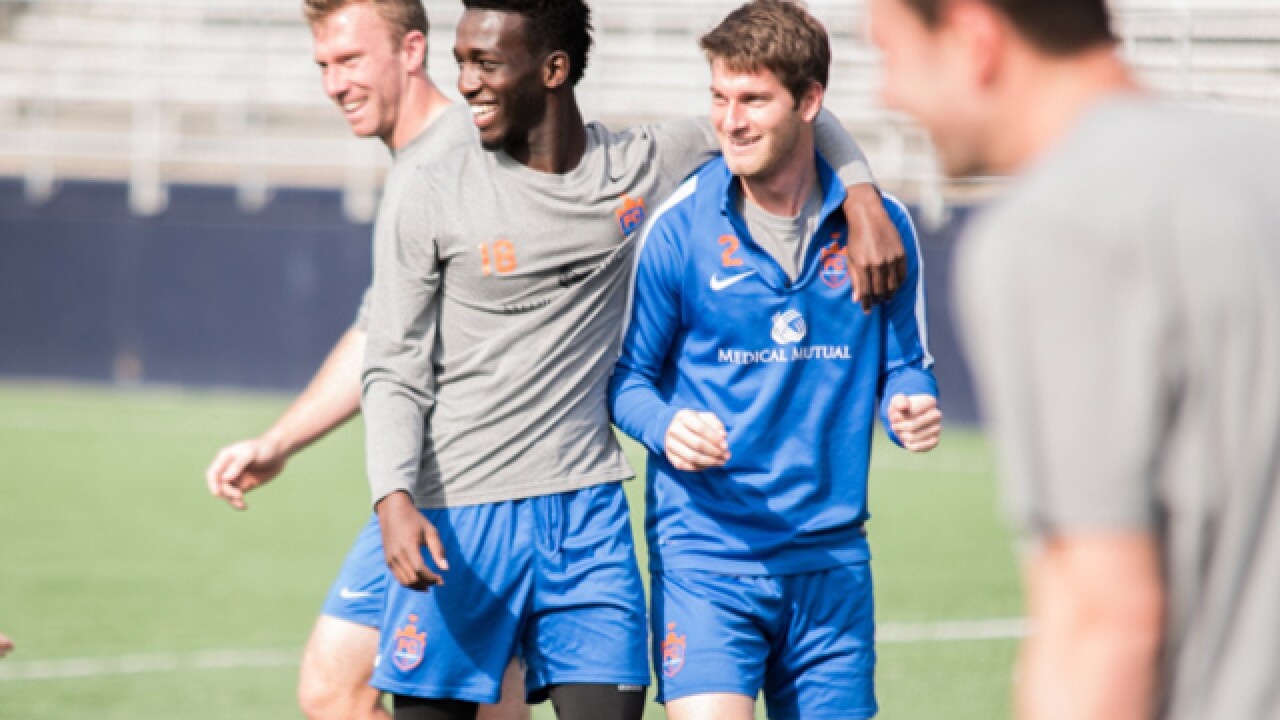 Seven months after its launch as one of the latest teams to join the fast-growing United Soccer League, FC Cincinnati is ready for its inaugural season.

Cincinnati opens the regular season at 7:30 p.m. Saturday in South Carolina when it faces the Charleston Battery, a 2015 playoff team established in 1993 and one of the two oldest continuously operating professional soccer clubs in the U.S.

The Battery holds the league’s longest home unbeaten streak at 25 games, posting a 16-0-9 record since a May 10, 2014, loss to Wilmington Hammerheads FC.

“I don’t know if you get a tougher opposition in the first game of your history as a club,” said FC Cincinnati coach John Harkes. “They are so historically sub-planted in the game in this country for years and years, and they've had so much success in their club and their following, and it’s all brand new for us. But at the same time, the work we've put in in the preseason has been very good. It's been positive, and it's a good group, good mentality, and we're ready to test ourselves.”

Here’s a look at the Top 9 things you should know as FCC kicks off the season.

With 29 teams spanning 19 U.S. states and three Canadian provinces, the USL is the largest professional soccer league in the country and has been the fastest-growing league in the world. The third-tier league added six expansion teams this season, including FC Cincinnati, and the influx of teams has only strengthened the competition level. Five of the 11 playoff games last year needed at least overtime to produce a result. The Rochester Rhinos won the championship, 2-1, over L.A. Galaxy II. FC Cincinnati is the only independent team in the Eastern Conference; everyone else has ties with an MLS side.

“There is no easy game,” Harkes said. “You can easily see the clubs themselves and the way they have put the teams together, every team is going to be a challenge, and I think the No. 1 thing is if you expect that and you prepare for it, you are going to have a chance. But if you don't, you are going to find yourself trailing early in the season.”

The Rhinos seek to defend their title from a year ago, but they’re also the team to beat just because of how good their defense was last year. Having allowed just 15 goals in 27 regular-season games, Rochester posted the best defense in the history of the league, as the club won the Eastern Conference regular-season title at 16-1-10. Charleston had the next-best defense last year, allowing 28 goals in 28 games. Cincinnati’s natural rival Louisville FC posted a league-leading 55 goals scored last year and finished second in the East. Oklahoma City Energy FC won the Western Conference regular-season title, going 12-7-8.

FC Cincinnati surprised during its first preseason, which began with training sessions Feb. 4 and kicked into gear with three games Feb. 21-27 in Bradenton, Florida. Cincinnati went 3-0-2 for the preseason, including wins over Major League Soccer’s New York City FC and Danish club HB Køge en route to claiming the IMG Suncoast Pro Classic title, plus $10,000 in prize money. FCC concluded the preseason with a 2-0 win at Xavier University on March 18, after a 1-1 draw with second-tier North American Soccer League’s Indy Eleven.

None of that guarantees any success in the USL, but the important thing is FCC gained valuable experience and built some confidence going into the season.

“It was fantastic for us to put ourselves in positions where we were going to be challenged, not just tactically but also speed of play and physicality,” Harkes said. “It tells you a little about yourself. We're going into the unknown here, and certainly you like to have some expectations to what the challenges are. We've done enough scouting, and we watch enough games, but at the same time, we won't know until we're in that arena.”

Austin Berry: The Cincinnati native and 2012 MLS Rookie of the Year spent last year playing in South Korea on loan after injuries took him in and out of the lineup with the Philadelphia Union in 2014. He’ll be a leader on FC Cincinnati’s back line and has a chance to establish himself as one of the top defenders in the league.

Kenney Walker: The Wickliffe, Ohio, native was drafted by the Los Angeles Galaxy in the second round (38th overall) in 2012, and he also has playing experience with the Fort Lauderdale Strikers and the Carolina RailHawks.

Mitch Hildebrandt: Goalkeepers coach Jamie Starr said that in the right environment, Hildebrandt “has the chance to be one of the best goalkeepers in the league.” Hildebrandt has three years of professional experience with NASL’s Minnesota United, but he made only 15 appearances. He’s probably the biggest wild card for FC Cincinnati this season.

Harkes will keep opponents guessing this season with what could be an ever-changing formation. He used three or four different ones in the preseason and said he wants his players to be transitional when they get into their defensive shape.

“The No. 1 thing is to make sure we can adapt, and we've prepared our players so they can adapt to any formation we demand on the day from our perspective, but also from the opposition,” Harkes said. “It's finding a little bit more about ourselves, characteristics and personalities that are on the field. … Hopefully we've done a good enough job to be able to come out of the gate and be able to adapt to the opposition at times, but first and foremost we try to focus on ourselves.”

The USL brings a wide array of playing environments that teams have to adjust to from game to game. FCC will be playing in the 45,000-seat Nippert Stadium (capacity will be scaled down for soccer) and on a turf field, but other clubs play on natural grass in much smaller facilities without the stadium feel to them.

The better question is why not? The club’s marketing efforts and partnerships with local pubs have added to the buzz that came along with the launch of the team under owner Carl Lindner III and the hiring of Harkes. With the leadership involved, this club is legit. More than 4,400 fans already have purchased season tickets before a single game has been played at the renovated Nippert Stadium, and there is too much talent gathered here for FCC to flop. Harkes, assistant Ryan Martin and general manager/president Jeff Berding have carefully crafted a roster loaded with professional experience — many who spent time in the MLS and believe this is their ticket back.

FC Cincinnati finishes near the top of the Eastern Conference standings and league attendance figures. Harkes has said since the beginning that FCC is here to be competitive. He’s also realistic enough to know the challenges ahead, though the club won’t be satisfied with anything less than a playoff berth when it comes to on-field performance.

Perhaps more important to leadership’s ambitions of jumping to the MLS is how FCC performs at the gates, and that’s off to a great start with the current season-ticket sales totals already surpassing the league average attendance for games last year.