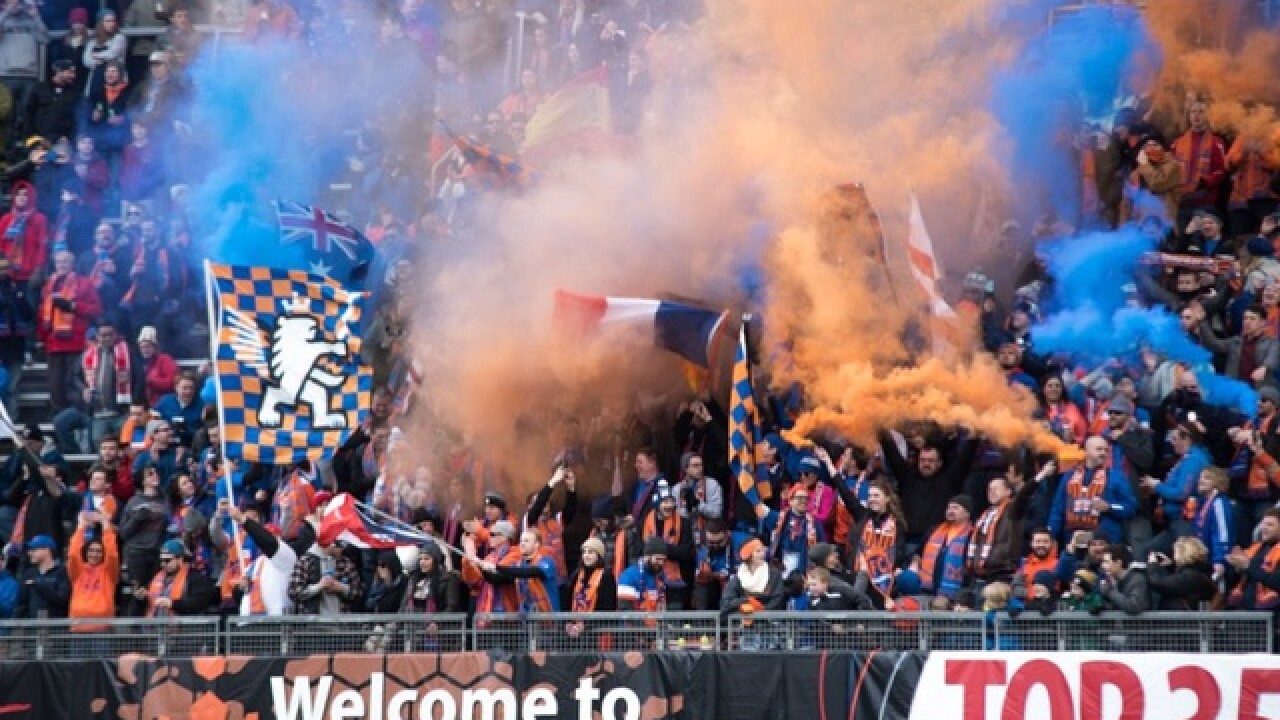 CINCINNATI – It was only a matter of time before FC Cincinnati would break through.

A pair of second-half scores in a two-minute span lifted Cincinnati to a 2-1 come-from-behind win over Toronto FC II in front of a crowd of 19,112 fans Saturday at Nippert Stadium.

“It was one of those feelings where you know it's going to come, but in the past couple games it's been the same feeling and we haven't done it,” said FCC midfielder Eric Stevenson, who scored the game-winner in the 63rd minute, moments after the club got the equalizer. “It felt good to get the second one right after the first one. It was a great win.”

Here’s a look at the Top 9 takeaways from the win:

Toronto midfielder Raheem Edwards silenced Nippert Stadium in the fourth minute when he dribbled through the defense and easily scored from about 10 yards out, front and center, for the first goal of the game.

It was almost the exact same goal he tallied to open the scoring in FCC’s 2-1 win at Toronto on April 24, and FCC seem completely stunned. The defense sat back just a hair too long as Edwards made his way into the box, and he punished the Orange and Blue for his fifth goal of the season.

“The last time we played them, he pretty much did the same thing,” Stevenson said. “I don't know if we were caught off guard, but it was a great finish and great individual play. We knew what a great player he is, we just didn't execute on that one instance.”

2. Build-up to a big reward

Cincinnati dominated possession but couldn’t capitalize on the grunt work until the 62nd minute when Jimmy McLaughlin found center back Harrison Delbridge sneaking back door for the equalizer. Delbridge headed in a beautiful cross from the left flank, and while the crowd was still erupting, Stevenson tallied the go-ahead goal off a needle-threading pass from Corben Bone.

“They came out and surprised us a little bit,” FCC coach John Harkes said. “For us, it's more about seeing the tests that get put in front of us and how we're going to respond to that. We had a great talk at halftime. The group is becoming a little more mature and finding solutions themselves.”

Delbridge scores in practice all the time, according to Harkes, but he hadn’t been able to put one in the back of the net in a game until Saturday.

“I've been looking for that goal for a while, so it felt good to get it tonight,” Delbridge said. “We had one set piece up there so I sort of hung around a little bit, but it was a great ball into the box from Jimbo, and then I was happy to be open on the back door.”

Stevenson was making just his third start, as he is coming back from double hip surgery that sidelined him for more than 18 months. He had an assist in the win over Montreal last weekend and has shown a lot of hustle in his return to the pitch, but Saturday also marked his first goal.

Harkes called the game-winning goal “one of the better ones” he’s seen in a long time because of the buildup and finish.

“Corben played me an unbelievable ball, so he made it easy for me,” Stevenson said. “I just took a touch forward and just past the defender, and the ball was in front of me and I kind of gave the keeper a fake and he went down so I had the whole goal wide open, so it was a simple finish. I was inside the 6, so I just tapped it in. I had most of the goal to shoot at, it was more hard to miss than make it at that point.”

Speaking of his return to the pitch, Stevenson expressed gratitude to the club for giving him “a second chance” after his hip surgeries.

“John gave me a second chance to play here,” he said. “... He gave me plenty of time to mold my way back into playing and getting used to the speed of play and touches and everything. … It was a slow process in the beginning. They told me they wanted me to start by June, but 'We'll see how it goes,' and I haven't had any setbacks so far, so that's been awesome and I'm just really happy overall.”

FC Cincinnati had allowed goals in the 90th minute or later in four games this season, including two straight matches heading into Saturday. That wasn’t the case this time, as the defense tightened up to close out the win for Mitch Hildebrandt’s eighth win in goal.

“I feel toward the end of the game this time, we did a pretty good job of managing the ball a little bit better,” Delbridge said. “Toward the end of those games, you are always going to have to deal with a few chances when teams just start throwing everything at you, so you have to expect that a little bit, but I think we have started to learn from the last couple games to be able to shut it down with our possession and moving things around.”

Harkes said earlier this week FCC was working on different shapes to prepare for Toronto, and the club came out with a 4-2-3-1.

The change in formation meant Bone playing as more of a defensive midfielder, along with Kenney Walker, than he is accustomed to. Bone, who admittedly favors playing in the attack, has been working to become more of a two-way player, Harkes said at practice this week.

After FCC took the lead, the club sat back on defense a little more in a 4-5-1 for about five minutes, absorbed some pressure and then countered with its usual possession-based attack.

Cincinnati seemed to look a little tired by the end of the first half, which could be the result of the heavy workload for starters and a dominant possession game the club displayed Saturday.

FCC has been playing pretty much the same lineup (save Paul Nicholson filling in for injured Austin Berry and Stevenson replacing Ross Tomaselli) every match, whereas Toronto has enjoyed the luxury of fresh lineups, thanks in part to the players received on loan from its Major League Soccer parent club. Toronto started just six of the same guys from Wednesday’s home match against Montreal, and they’ve used more than 30 players. FCC has played just 17 guys in USL play all season.

The home side did make one change at halftime, inserting Derek Luke in Pat McMahon’s place on defense, and Antoine Hoppenot played the final 26 minutes.

Cincinnati now has a chance to close the gap with Louisville, as a win at Slugger Field on June 25 would put the Orange and Blue just one point behind the Eastern Conference leaders.

Delbridge said having that game up next didn’t necessarily put more pressure on FCC to get the win Saturday, but players put those expectations on themselves regardless.

“It's a good feeling going in there,” Delbridge said. “They always tell us you never want to get too high after wins and too low after losses, so we try to stay even-keeled, but there is good confidence in the group and we're looking forward to getting down there.”

FCC came just short of reaching 20,000 fans for what would have been the third time this season, but the 19,112 attendance was a jump from the past three league games at home when that figured ranged between 11,278 and 16,097.

The club still holds the league record for single-game attendance at 23,375.