Are you ready for some futbol?! 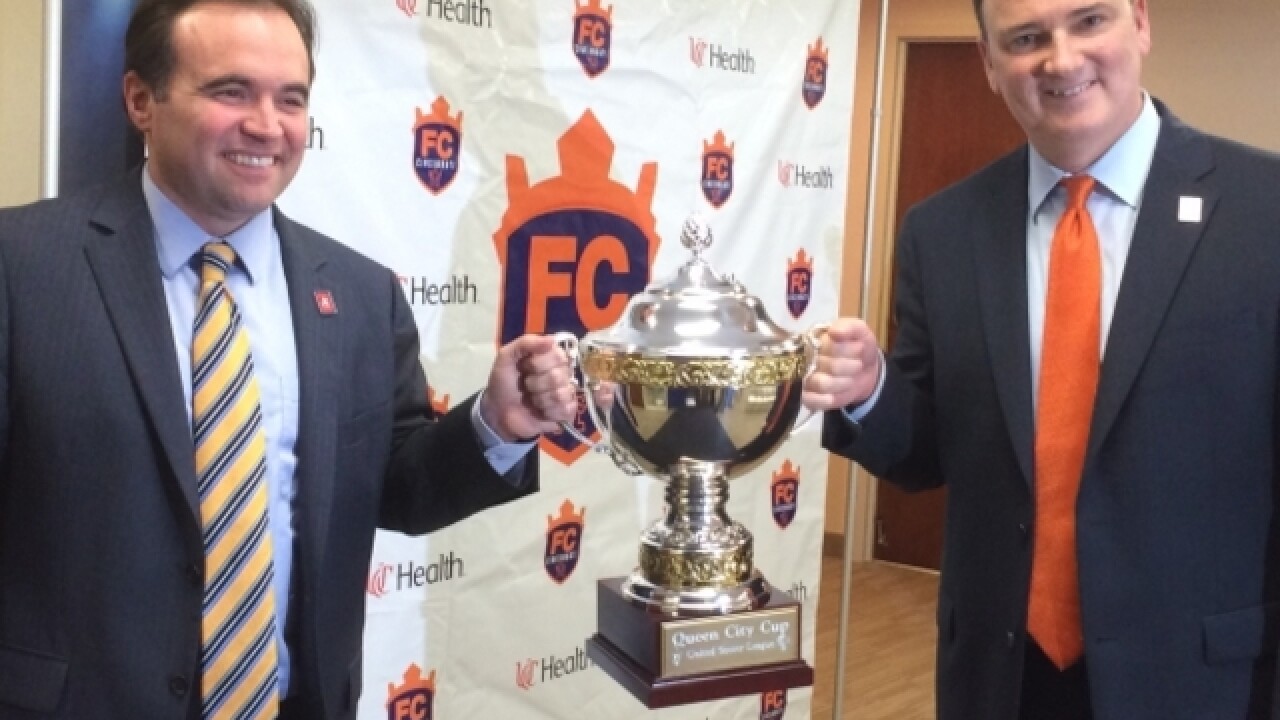 File
<p>Bragging rights are at stake for FC Cincinnati's home opener against Charlotte, which is half of a home-and-away series dubbed the Queen City Cup. Cincinnati Mayor John Cranley, shown here holding the cup with FC Cincinnati GM Jeff Berding, has a friendly wager riding on the game with the mayor of Charlotte, Jennifer Roberts.</p><p> </p><p> </p> 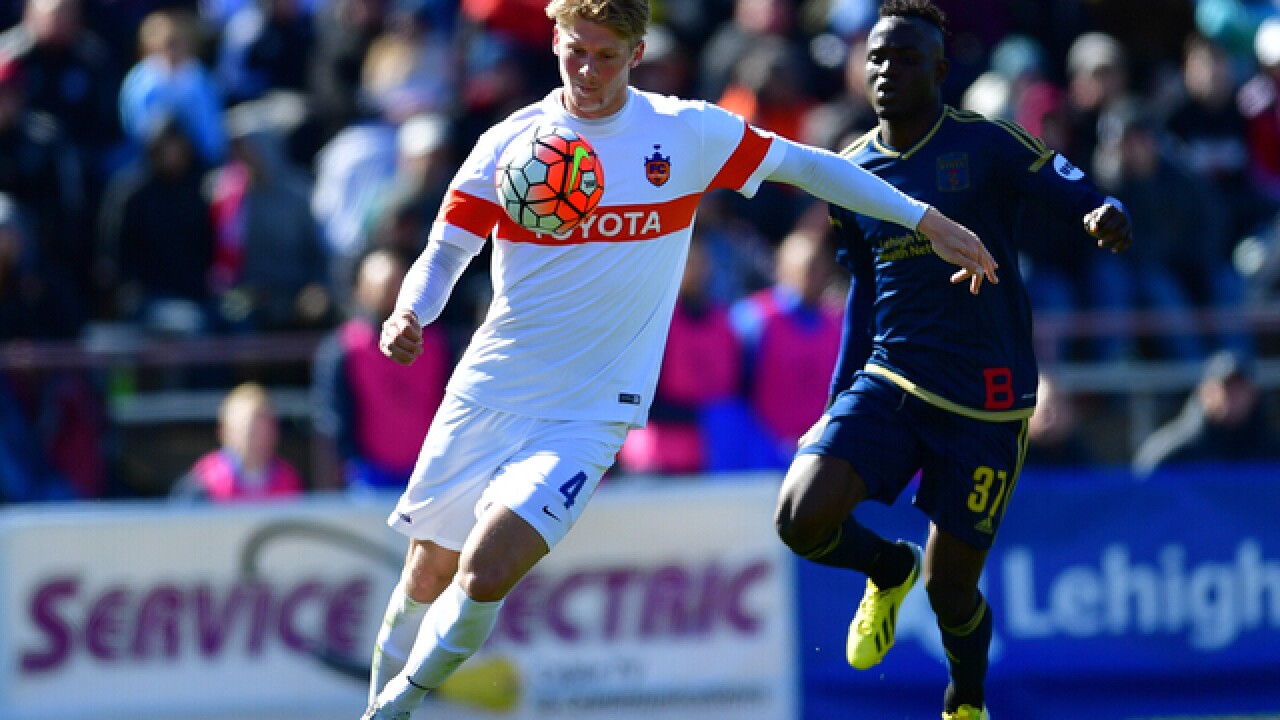 Avid soccer fans crowded into local bars the past two weekends to watch FC Cincinnati’s first games, which were streamed on the televisions of the club’s many pub partners in town.

Now, as the team prepares for its first home game, it’s time to see the rest of the community of futbol lovers, along with casual sports fans, get behind the Queen City’s newest pro team.

FC Cincinnati announced earlier this week that more than 10,000 seats have been sold to its inaugural United Soccer League home game 7 p.m. Saturday at Nippert Stadium. FCC (1-1) hosts the Charlotte Independence (1-1) in the home portion of a home-and-away series dubbed the Queen City Cup Challenge.

Not yet committed to braving the cold at the Nipp? Read on, for here are the Top 9 reasons why you should go to the game.

This isn’t just any home opener. It’s the club’s inaugural home opener, the first of what FC Cincinnati hopes eventually leads to expansion into Major League Soccer. But for that to happen, as it did in only three years for former USL franchise Orlando City FC, fans have to demonstrate that this city can support professional soccer at the highest levels. And that all starts now.

To help preserve the memory of the occasion for the fans, FCC will even give away commemorative Inaugural Day tickets to 5,000 fans as they exit the stadium at the conclusion of the game.

The 29-team USL is considered a third-tier soccer league, behind MLS and the North American Soccer League. However, it’s the only league with MLS partnerships, and thus is considered more like a Triple-A team with players moving up and down between the USL and MLS clubs with ties. FC Cincinnati, hoping to be its own MLS club someday, does not have a partnership, but several of its players have experience on, or at least working with, teams at that level.

FCC earned a preseason win over MLS’ New York City FC, and it’s not uncommon for USL clubs to beat MLS opposition in Lamar Hunt U.S. Open Cup play, as Charlotte did last year when it upset four-time MLS champion D.C. United to advance to the Round of 16.

USL games also have a tendency to be close, nail-biting decisions. Five of the 11 playoff games last year needed at least overtime to produce a result, and FC Cincinnati already has been a part of two one-goal-margin games. After losing the opener at Charleston, 1-0, on a goal in stoppage time, FCC bounced back to earn its first ever regular-season win, 2-1, at Bethlehem on Sunday. Andrew Wiedeman scored on a give-and-go in the 25th minute, then set up Sean Okoli’s goal on the same type of play nine minutes later. Both goals were beautifully executed plays, something fans could see a lot of this year.

After two tough road games to open the season, a friendly environment could do the team some good. Coach John Harkes said the “12th man” concept isn’t just a cliché. Teams really do feed off the support of the fans.

Plus, bragging rights are at stake here. Charlotte and Cincinnati established the Queen City Cup Challenge with the winner of the home-and-away series keeping the trophy. Mayor John Cranley doesn’t want to have to wear a Charlotte jersey when the two cities’ mayors serve lunch at a local homeless shelter after the series, as part of a friendly wager they added to it.

FC Cincinnati boasts 10 players with MLS clubs on their resumes, and five players are just getting their start at the professional level.

5. It's a Great Atmosphere

This might be the first time 10,000 soccer fans have ever crowded together to watch a live game in Cincinnati, and it’s all happening in a world-class facility. The 45,000-seat Nippert Stadium reopened in the fall after undergoing renovations.

Soccer is getting big. English Premier League has grown in popularity here, as soccer fans have adopted teams from afar and followed them through the Internet and on television. Crowds of people have also shown support in local restaurants and bars showing U.S. men’s national team games in the past few World Cups. Many people even make the drive to Columbus for Crew games on weekends or in the summer. So why not enjoy professional soccer live, right here?

Youth soccer players — there are more than 55,000 of you out there — get into the first two home games (this Saturday and next) for $1 if they wear their jerseys. Adults and non-youth soccer players can purchase additional tickets for $12 to sit in the youth/clubs section designed for families. College students can attend for $5 with a valid college photo ID.

Families with older kids can join “The Bailey” section for $10 a ticket. Just be prepared for some rowdiness. That’s where the most passionate fans are supposed to sit.

There is also some pre-game entertainment at the UDF Kids Zone in Sheakley Field, off the southeast end of Nippert Stadium. The Kids Zone will feature games, food and drinks, merchandise and all sorts of other activities to get the young fans geared up for the match.

For those who like to people-watch, professional soccer games are a great place to be. The most passionate fans — and there’s usually a good number of them — are always dressed up in lots of club garb. They bring all kinds of signs, flags and noisemakers and even have chants and songs to demonstrate their support. FC Cincinnati has four known support groups, including “The Pride,” “Die Innenstadt,” “The Den” family club and “Cardiac Cats” college group. They alone could make things pretty entertaining.

8. Because You Crave Good Sports Entertainment

March Madness is over, the NFL season is months away and the only other game in town is the Cincinnati Reds. There’s room in town for two good teams at the same time, and FC Cincinnati provides another sporting event to fill your needs until the other football season starts in the fall. Saturday is the first of 15 home games.

9. Check Out the Buzz for Yourself

Chances are you’ve been hearing some of the buzz surrounding this team, which has the backing of owner Carl Lindner III. The Lindner family has deep roots in the sports scene in Cincinnati and certainly seems to be doing things right with FC Cincinnati. More than 4,400 season tickets have been sold, and many fans have expressed that “this feels legit.” Many pro teams have failed in Cincinnati, but why not give FC Cincinnati a chance. Go see for yourself why this club has a great chance to succeed.