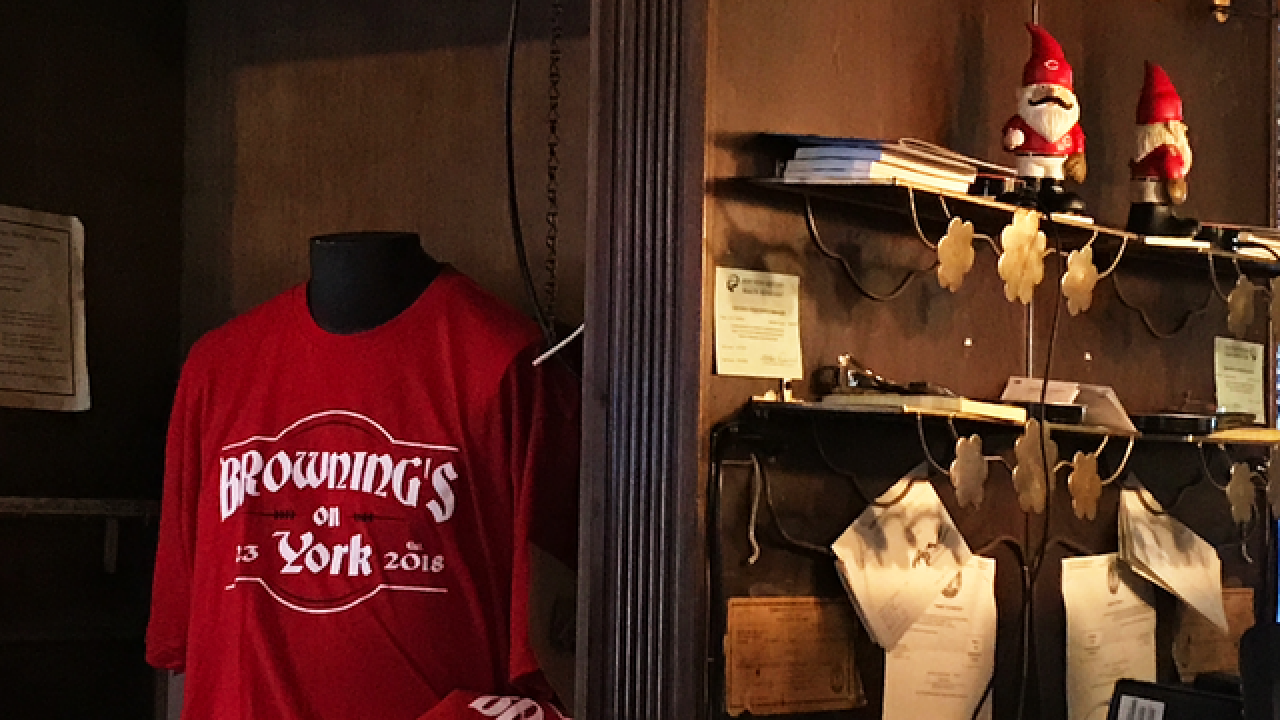 Copyright 2018 Scripps Media, Inc. All rights reserved. This material may not be published, broadcast, rewritten, or redistributed.
Brian Mains | WCPO
<p>Reds Hall of Fame pitcher Tom Browning is hosting a special ribbon cutting and unveiling of his bar Browning's on York on Opening Day. Festivities at the bar, located at 232 York Street in Newport, start at 8 a.m. Thursday. Browning bought the bar, formerly Bart's on York, in March. His son Tucker Browning is the bar's manager.</p>

NEWPORT, Ky. – "Mr. Perfect" Tom Browning plans to be the grand marshal of his own Opening Day parade on Friday.

"I think I'm walking over to the ballpark with the fans," the Cincinnati Reds Hall of Fame pitcher said.

Browning will walk to Great American Ball Park from Browning's on York, his new bar located at 323 York St. in Newport. He purchased the former Bart's on York and began operating the bar with his three sons during the first week of March.

Browning and his family will open the bar at 8 a.m. Friday for Reds Opening Day festivities. Newport Mayor Jerry Peluso will perform a ceremonial ribbon cutting at 3:30 p.m., and former Reds player and manager Tommy Helms will mingle with patrons and baseball fans throughout the day.

"I expect (it) to be a really good day," Browning said.

Browning, who pitched a no-hitter in 1988 and played for the 1990 World Series Reds team, admits he knows a lot more about baseball than the bar business.

"The opportunity presented itself," he said. "I always talked with my buddies about opening a neighborhood bar that my sons could run."

A few months ago, one of those friends told Browning they had found the perfect bar for him to buy in Newport. Browning's on York has a eye-line view of the ballpark.

"This is probably the spot I need," Browning said. "It's been cool."

He then recruited his son Tucker to be the full-time bar manager. Browning said Tucker has previous experience with bar and restaurant work.

"It's awesome for me," he said. "I kind of smile on the inside. I'm probably too nosey, probably get in the way more than anything else."

Tucker Browning said his dad has been a pretty good boss so far.

"He makes it a little easy for me," he said. "There's no drama like when you work for someone else."

Tucker Browning said he has seen a good mix of young people, working-class people and regulars since he began managing the bar.

Tom Browning said he added some of his Reds memorabilia to the bar, which seats about 60 people. There is a sign paying tribute to former broadcaster and Reds player Joe Nuxhall and a photo autographed by members of the Big Red Machine.

A mirror honoring the 1990 World Series Reds team hangs on a wall near the pool table in the back of the bar.

"I want it to be a nice atmosphere -- come in here talk baseball, maybe Bengals during football season," Browning said. "I want to be a neighborhood type of bar."