Thrive, a startup that teaches the underemployed to do IT work, turns a profit

Trains them, then puts them to work 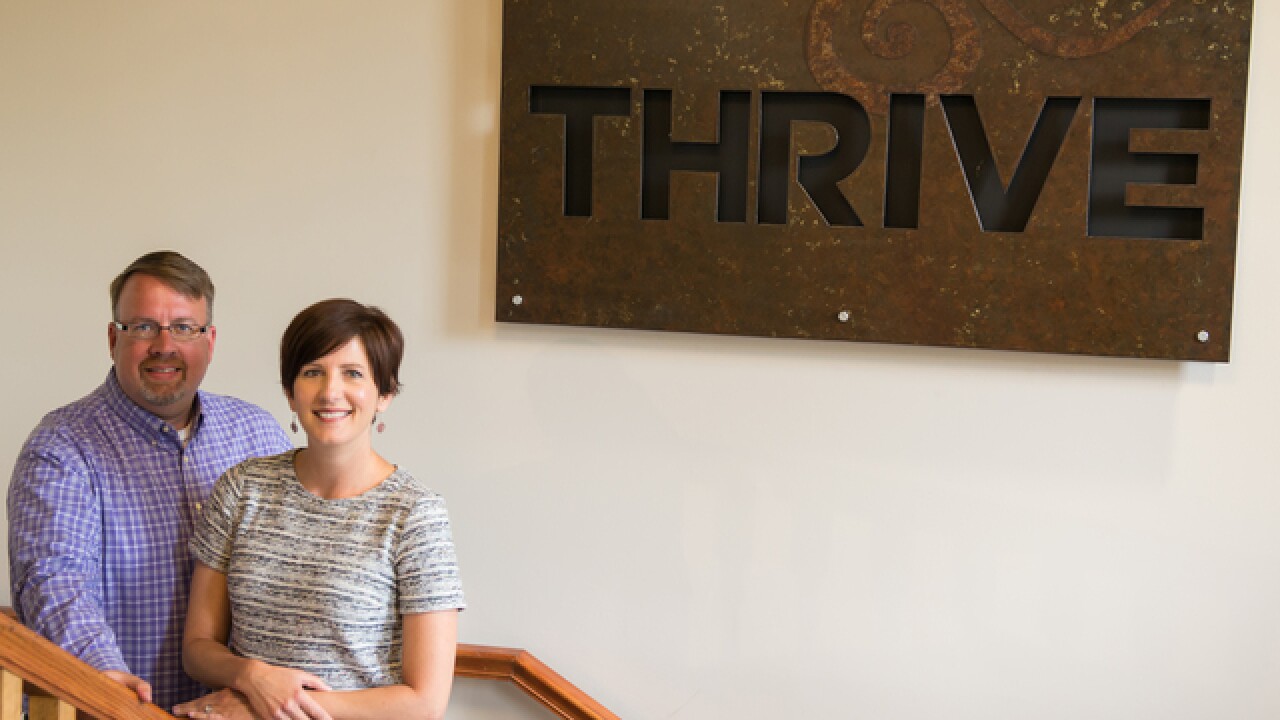 Copyright 2018 Scripps Media, Inc. All rights reserved. This material may not be published, broadcast, rewritten, or redistributed.
Provided
<p>Thrive co-founders Kelly Dolan and Michael Kroeger are pictured in the East End building where Thrive has its offices. (Photo provided by Stacy Wegley)</p>

CINCINNATI -- Although it's still a startup at two years old, Thrive Urban Impact Sourcing looks like a much more established business.

"The growth is a little insane," Kroeger said.

What does Thrive do?

The company calls itself an "IT talent incubator." It does IT consulting but charges less than a traditional IT firm because its workforce is a blend of veterans and IT experts in training.

Other IT firms might want to hold on to their employees, but Thrive openly encourages clients to hire theirs away because that enables Thrive to take on another crop of IT trainees, Kroeger said.

The company partners with Per Scholas to identify underemployed locals with the analytical skills needed for IT. Per Scholas trains them in software development for six weeks, and Thrive puts them to work.

For many, it's a ticket out of poverty. According to Thrive, before joining the company, trainees earn an average annual wage of $10,000, but after a year with Thrive, they earn an average of nearly $50,000. That benefits taxpayers in two ways: by getting people off public assistance and by enabling them to pay taxes.

Nearly half of Thrive's employees are women, and more than 65 percent are minorities, Kroeger said. They range in age from 19 to 62, Dolan said.

How did Thrive happen?

Dolan and Kroeger worked together at IT consultant Centric before starting their own IT consulting firm, Ingage Partners seven years ago. The company now has about 50 employees and annual revenue of about $7 million, Kroeger said.

They created Thrive specifically to help the people that Per Scholas was training break into the IT job market. Like other cities nationwide, Cincinnati has hundreds of IT openings but not enough workers to fill them.

Unlike many startup founders, who seek venture capital to build their business, Kroeger and Dolan funded Thrive from their own resources. Taking venture dollars creates a cycle of focusing on the next investment dollar rather than the business itself, Kroeger said.

He estimates that they've put about $250,000 into the business, not counting the money spent on the building. But, he added, they're also not taking big salaries for themselves.

It's a relationship-based company, Kroeger said, rather than a transaction-based one. The company pays 100 percent of the premiums for employees' medical, dental and vision insurance. Employees also get several different kinds of bonuses and a 401(k) match.

"We believe in treating people the way we want to be treated," Dolan said. She and Kroeger are both members of Crossroads, the Tri-State region's largest church.

Dolan said they also donate 25 percent of Ingage's profits to charity and give employees paid volunteer time off.

What's next for Thrive?

Consolidating the gains already made and identifying which service offerings the company will move forward with, Dolan said. That should take 18 to 20 months, she added.

Beyond that, Kroeger said, they have other decisions to make, such as whether to replicate Thrive in other markets and partner with other organizations.

One thing that won't change, he said, is the company's dedication to incubating new IT talent.