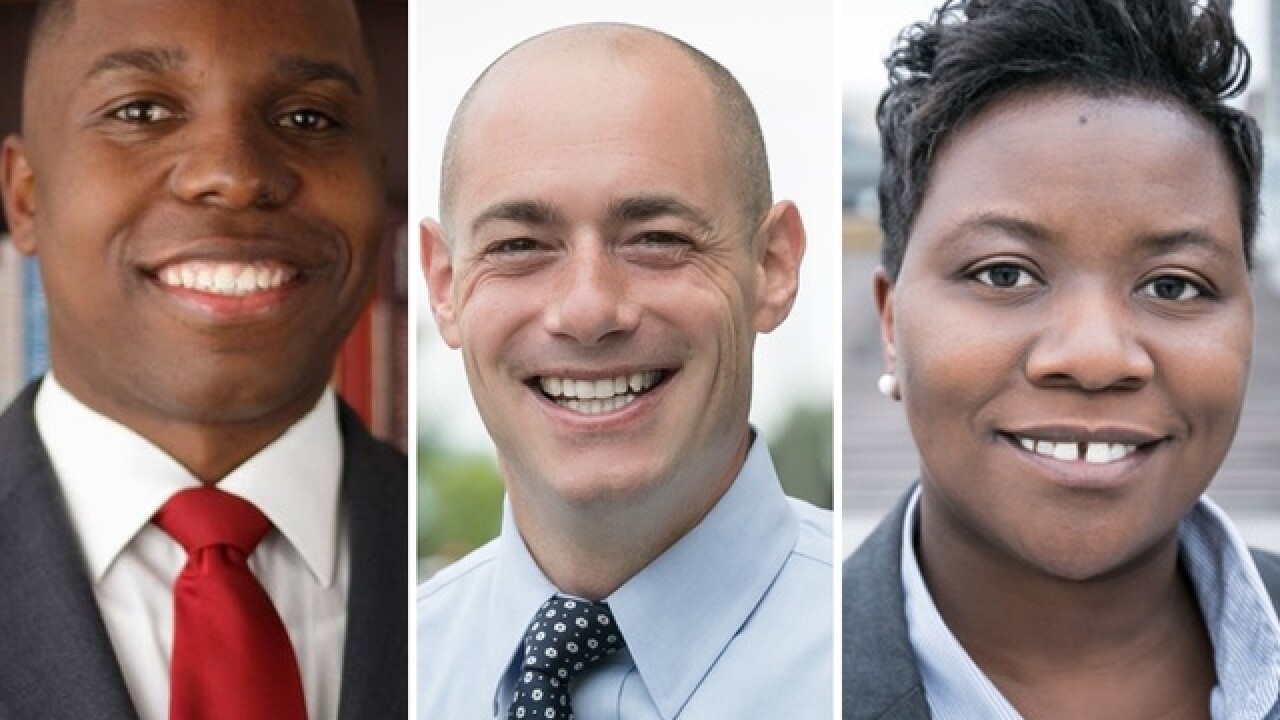 CINCINNATI -- It was a good night to be an incumbent running for Cincinnati City Council.

All six of them kept their seats.

But the other 17 candidates who ran faced the daunting challenge of wooing donors to raise enough money for ads and visiting thousands of doorsteps, hoping to train voters to remember their name on Election Day.

Unofficial results show Democrats Tamaya Dennard and Greg Landsman winning a seat on council, while Republican Jeff Pastor also earned a spot. Only 300 votes separate Pastor and Michelle Dillingham for the ninth and final spot on council; a count of the 1,700 provisional ballots cast in the city could change that race. Provisional ballots are cast when a person's voting eligibility is questioned.

It took first-time candidate Dennard's campaign 34,000 knocks on Cincinnati's front doors to pull of her sixth-place finish on council.

"We knew that we weren't going to be able to raise as much money as other people in this race," Dennard said Tuesday night. "We knew that we needed to knock more doors than anybody."

Landsman said his campaign, too, visited thousands of voters at their homes during the last year. He also knew he had to raise cash and earn endorsements.

Landsman and Dennard each earned 26 endorsements from local labor unions and political organizations.

"We worked for every single endorsement — we both raised an enormous amount of money," Landsman, of Mount Washington, said. "We had incredible teams. We both had really compelling messages."

Landsman and Pastor, a first-time candidate, were able to run television ads during the final days of the campaign. Pastor said his campaign purchased 20,000 brochures to pass out to voters and was surprised to run out of them by mid-August.

"The TV ads, the billboards, the yard signs -- everything contributed to this effort," Pastor said. "This was a hard-fought win."

Dennard, Landsman and Pastor all appealed to a cross-section of voters.

Dennard, a College Hill native, talked up her corporate background working at Duke Energy and managed to pick up votes in Republican-leaning areas such as Mount Washington, but her impoverished background and campaign promise to include struggling neighborhoods in Cincinnati's revitalization boom appealed to Democratic strongholds.

"I understand the importance of the business community (and) having a strong tax base; I grew up in poverty," Dennard said. "I understand that world as well. It doesn't have to be an either-or."

Landsman had good experience working with the business community to get their support on last year's Preschool Promise tax levy — a campaign he led and that won overwhelming support from the community. He also campaigned on lifting up families out of poverty and broadening access to education.

Pastor, meanwhile, earned one of only three Republican endorsements, which helped him in areas like Hyde Park, Mount Lookout and Oakley. He also performed strongly in Democrat-leaning, African American neighborhoods such as Bond Hill.

All three winners said in interviews Tuesday night that it proves they're ready to work together on council. For the past four years, council has often been divided into two voting blocs: one led by Councilwoman Yvette Simpson and the other by Mayor John Cranley. Bickering between the two parties has erupted during hours-long council meetings.

But Landsman, Dennard and Pastor stayed out of the mayoral race and did not formally endorse candidates.

"We really stuck to the issues; we always had this idea that we could come together and talk it out," Pastor said. "It's going to be a lot more collaboration, less acrimonious."

The city will get to witness that harmony firsthand when the new council is sworn on Jan. 2.