This polar bear couple has become inseparable, and now the zoo's looking for her baby bump 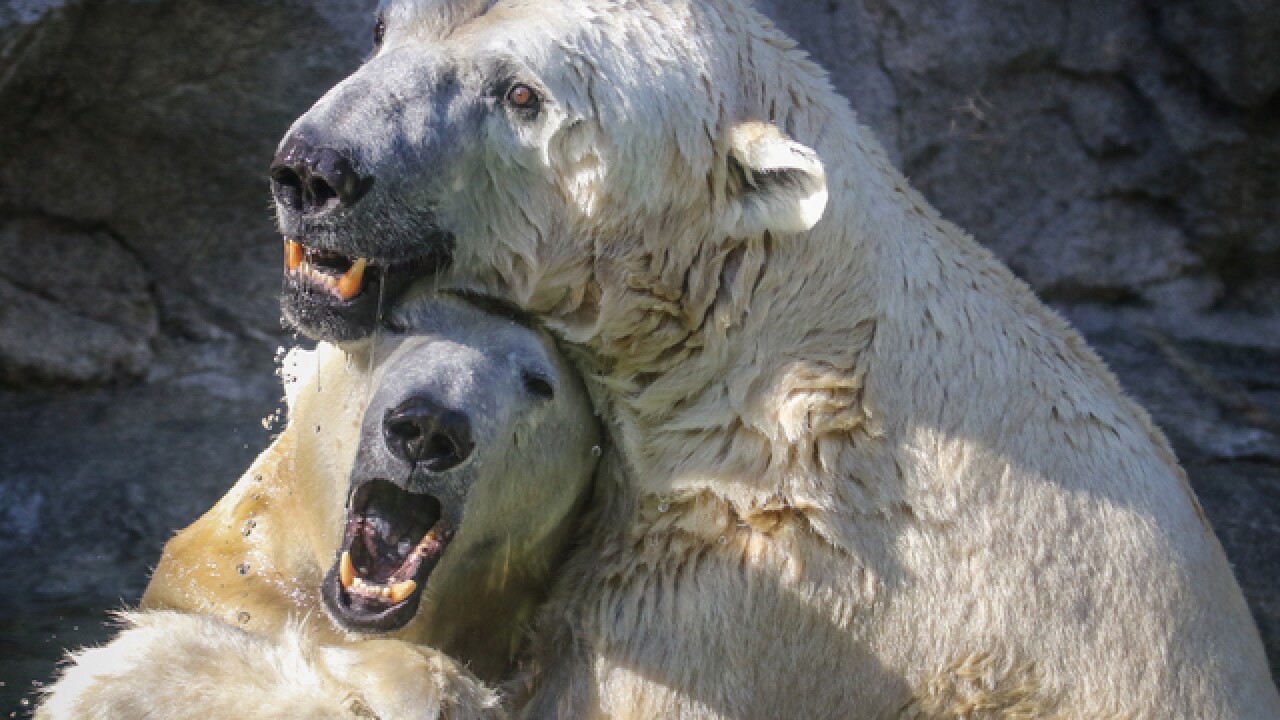 Copyright 2018 Scripps Media, Inc. All rights reserved. This material may not be published, broadcast, rewritten, or redistributed.
Provided
<p>Cincinnati Zoo polar bears Anana and Little One play in the water and feel the love.</p>

CINCINNATI -- If you've visited the Cincinnati Zoo & Botanical Garden's polar bear exhibit lately, you may have seen female Anana and male Little One playing together in the water or basking in the sun side by side.

The two bears appear to be every bit the cozy couple, but it wasn't exactly love at first sight for the pair.

"We never intentionally separated them or prevented access, but they would just sort of displace each other, so if one would come into an area, the other one would just leave," said Dr. Erin Curry, reproductive physiologist for the Center for Conservation and Research of Endangered Wildlife (CREW). "There was never any overt fighting or negative behavior in that respect -- they just didn't want to be around each other."

When Anana arrived in December 2016, she appeared to be a bit out of sorts in her new habitat, Curry said, occasionally pacing and intentionally avoiding her male counterpart.

Polar bear breeding season generally runs from January until mid-to-late April, so Curry said she was hopeful the bears would hit it off immediately. She said members of the Species Survival Plan (SSP) paired Little One with Anana because the female polar bear already had produced litters of cubs at her former home at the Buffalo Zoo. Curry said Little One is extremely valuable reproductively because his genes aren't represented anywhere among bears in captivity.

"Our male is a really laid-back male, so we thought they would be a really good match for each other," Curry said. "Little One was exhibiting appropriate behaviors for a male last year, but they just didn't click."

To help Anana feel more comfortable with her new home and her new roomie, animal excellence coordinator David Orban said they assembled a team including care staff, vets, facilities department members and CREW's Curry to examine the female bear's behaviors day and night. For three months last year, he said, the team logged Anana's movements throughout the habitat and where and when the female polar bear interacted with Little One.

"We got together and basically brainstormed, and I think the list was over 30 different action items we wanted to look into," Orban said. "We really tried to do our research and look at best practices for polar bear care management. We looked at a lot of sites and literature to see what has been done to reduce some behaviors and got a lot of ideas."

The team's action plan included some simple modifications to the bears' habitat, including giving them access to their multiple behind-the-scenes dens at all times and lowering the water temperature in their pool. Orban said they amped up alternating enrichment activities for the bears by introducing live fish to their water and adding toys and large floating icebergs to keep them engaged.

"Queen City Ice was awesome and gave us two huge truckloads of ice, so we had some large ice piles in there and we watched the bears interact with those," he said.

Perhaps the added ice helped defrost the relationship between the bears; Curry said the team noticed a sudden change in their behavior this past January at the start of breeding season. As Anana's measured fecal hormone level increased, she said, the female bear started spending more time with Little One. The bears not only chose to spend their days together, they also started sleeping in the same den, spooning at night.

"It was like someone flipped a light switch and they couldn't be separated," she said. "One day they had to bring Little One, the male, inside and the door was closed between them. And he was pawing to get out and she was trying to get in, so they just really wanted to be together. So it's sweet."

Curry said they finally witnessed breeding behavior in April between the two bears and hope Anana is now pregnant. To prepare, Curry said, they've trained the female polar bear for voluntary blood draws, where she lies down and sticks her paw through a mesh sleeve, and ultrasound, where she stands on her hind legs and pushes her belly into mesh.

"It's always voluntary," Curry said. "But ideally we'd like to start ultrasound soon. It would probably be November or late October before we would see anything, depending on when that embryo implants into the uterine wall, but it's possible we may see changes in her uterus as the summer goes along."

For now, Curry said, the care team will proceed as though Anana is pregnant. Even with ultrasound, blood samples, fecal testing and behavior monitoring, she said there's no full-proof pregnancy test; polar bears frequently experience delayed implantation of embryos and pseudo-pregnancies.

If all goes as planned, Anana would give birth in November or December, and Mom and babies would emerge from their den in the spring.

"The female dens up until the cubs get larger," Curry said. "Cubs are only one to two pounds when they're born."

Now that breeding season is over, will the bears' love affair continue?

It's too soon to tell. Orban said there's always a chance Anana will relegate Little One back to the friend zone. For now, he said, the two bears are still spending time together.

"We're still seeing positive social behavior where they're rubbing up against each other or playing," he said. "We'll be able to see if the frequency of that behavior and the duration changes, but for right now it seems like they're still friendly toward one another and still like being around one another."